The little black mixed Lab puppy came into our lives years ago in Maine, a wiggly bundle of lapping, licking energy – for a short time. Almost immediately on arrival in our home, she became very ill. Unable to retain food, she became dehydrated, weak and lethargic, wasting away before our eyes. Her sad gaze pleaded for help as she slipped toward another world. The vet said the “sick puppy syndrome” was common in pound puppies and her prognosis was grim. We kept the puppy at home on an IV to maintain her electrolyte and fluid balance and nursed her hourly with small sips of broth. Days, then weeks, went by as she tottered on the brink of death. Then one day, she began to show improvement and she steadily rallied, becoming once again a bubbly, leaping, happy puppy. We named her Lucky – a seemingly appropriate name under the circumstances.

Lucky reveled in summer, snuffling and snapping at sprinklers, and in winter plowing through fluffy snow, dashing about throwing sparkling flakes in all directions. Although she was our son Thomas’ dog, Lucky quickly became a member of the family. In nice weather she was an outdoor canine, but when Maine’s winter clamped down, she spent much of her time in a warm spot in our basement. The four of us – I, my wife, Thomas, and Lucky could read each other’s moods. Lucky, in particular, seemed to possess a sixth sense, knowing when we needed a close encounter with a warm puppy. She became a loved member of the family. 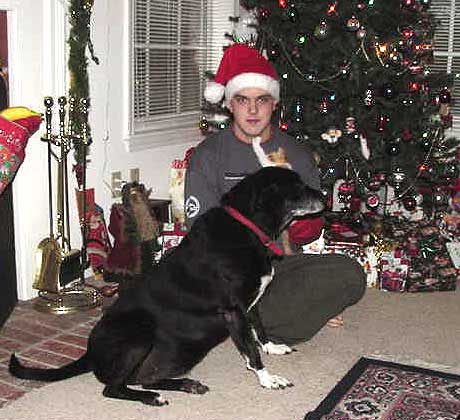 Photo by Paul H. Risk
Lucky with her head in Thomas Risk’s lap, providing warmth comfort and begging for some ear scruffling in return.

The years passed and we moved, as my wife observed just before our transplantation, from heaven in Maine to, well - Texas, as I had accepted a faculty position at Stephen F. Austin State University in Nacogdoches. Of course, Lucky came too, escaping once from the car in a large city on the way south but to our great relief, quickly recognizing her error and jumping back in. More time passed and we grew to love Texas, in spite of snow being replaced with heat and humidity. Lucky seemed to make the transition just fine even after being bitten by copperheads – twice.

We added a kitten named Hobbes, and an obviously abused and mistreated “drop-off dog” we named Moochie, who appeared one day along our rural road in a starving and frightened condition. Lucky accepted the new additions with dignity and forbearance, becoming the patient matriarch of the clan.

More years passed and Lucky, now fifteen years of age, began to move a bit stiffly and think a little more slowly, although she seemed aware of her shortcomings and apologetic for her slight debilitations. Then one afternoon she stretched out for a nap by her water dish on the patio and never woke up. A light had gone out of our lives.

We dug a grave under one of our bird feeders, gathered up our beloved companion and began a slow walking funeral procession, carrying her gently to her place of rest. That was when the deer came out.

Although deer in our backyard are a common event, it only happens in the twilight of early morning or evening and they never appear if we’re outside. On this day four of them came, three does and a fawn. In a straight line abreast, they stepped into the yard from the surrounding forest, intently watching our actions. Lucky and the deer had long shared an understanding. She never barked at them, merely observing their visits with a benign acceptance. Although they glanced at her from time to time, the deer seemed to know she wasn’t a threat.

This time, they came early in the afternoon, much before their normal feeding time. They walked toward us very slowly, with stately grace, their eyes fixed on our burden. In slow motion they lifted first one foot and then another, stepping gently in order to not disturb the solemn event. Not content to occupy their usual grazing ground at the edge of the lawn, they walked purposefully toward us, stopping a short distance away, standing like statues in reverent silence. We wrapped Lucky in a clean sheet and gently lowered her into the ground. I spoke a benediction, choked with an intensity of emotion I’ve seldom felt at human graveside services, and we closed the soil over her. As if on signal at the prayer’s amen, Lucky’s wild companions quietly turned and melted into the forest, their compassionate gesture to an old friend complete.

How did they know? Was there a discernable “disturbance in The Force?” I don’t know. But I choose to believe in Walt Disney. They knew. How is not important.

Do dogs go to heaven? I don’t know. But Lucky deserves to be there, and I am sure it will be a poorer place if she is not there wagging, smiling, and wriggling a greeting when we slip from mortality into the Great Beyond.