Not so long ago it seems, there was plenty of activity outdoors. Bees hummed, flies buzzed, mosquitoes cruised about looking for a blood meal, and we seemed to be having a field day with ticks. Beetles bumbled along, praying mantids crouched in false piety awaiting a passing insect. Wolf spiders and hundreds of other arachnids scuttled through the garden on search-and-destroy missions. Well into the fall, butterflies still sought nectar on remaining flowers. Where are they all their now? The answer is that some are dead, having succumbed to winter’s chill grasp, and some have left the area, but many others are merely hiding in protected locations, their life processes on hold until the weather moderates. 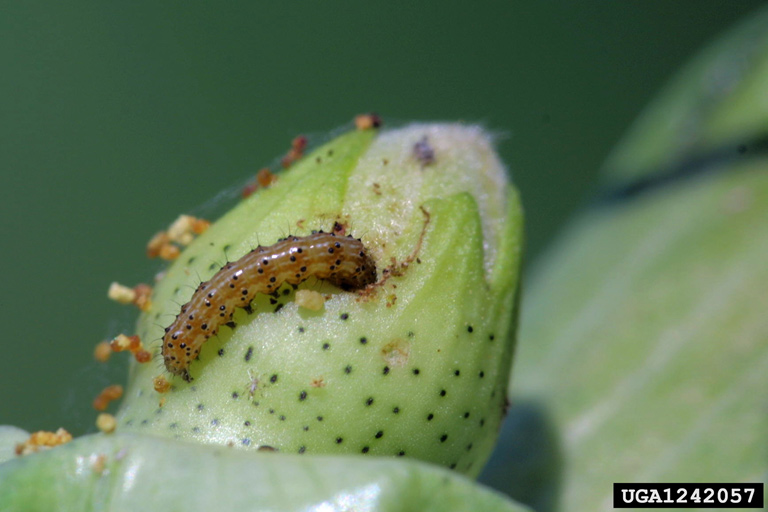 Photo by Photo by Russ Ottens, University of Georgia, Bugwood.org
A bud worm on a cotton bud, busily burrowing beneath the surface of the bud.

Clued by shortening days, adults capable of overwintering began seeking naturally protected locations in rock cracks and crevices, under the bark of diseased or dead trees, in mulch, soil, and plant litter. Others crawl into the walls of your house, under the eaves, in attics and garages. Mosquitoes are particularly good at finding safe places to get through the winter. More delicate adults began laying eggs.

Some insects spend the winter in immature form as larvae, pupae, or nymphs. Bud worms, for instance, eat out a shelter inside the buds of trees where they wait for warmer temperatures. When spring comes they eat the bud and go on to complete their life cycle. Certain wasps and flies inject their eggs under the bark of plants along with a chemical that causes the host to grow tissue around them, forming a tumor called a gall. As with the bud, the gall will provide food for the larva later on. An interesting note is that during pioneer days, it was found that insect galls were very high in tannins which could be used in tanning hides and in making ink.

Honeybees will be with us all winter, clustering in their hives on cold days and occasionally reappearing during warm spells. The colder it gets, the tighter they huddle, beating their wings to generate heat through exercise, and living on stored honey, pollen, and nectar. The inside of a bee hive is kept surprisingly warm by the body heat of its occupants.

Wasps get through the winter season as fertilized females hiding under bark and in other sheltered locations. With the first warm days, they will begin building nests and laying eggs to start a new generation.

Believe it or not, many insects use an antifreeze called glycerol to keep from freezing. It is similar to the ethylene glycol we put in car radiators for cold protection. However, they don’t buy theirs at the auto supply store. It is produced naturally by their body from sugars, sometimes in great quantities. For example, the Arctic Carabid Beetle’s weight during its frigid winter is as much as 30% glycerol, enabling them to survive at temperatures as low as -50 degrees Centigrade.

When water freezes, its molecules first cluster around small foreign particles and waste material in the cells of the animal. To avoid this, insects actively eliminate as much of this material as possible. So, cold protection is a two-step process: Generate glycerol and release waste. 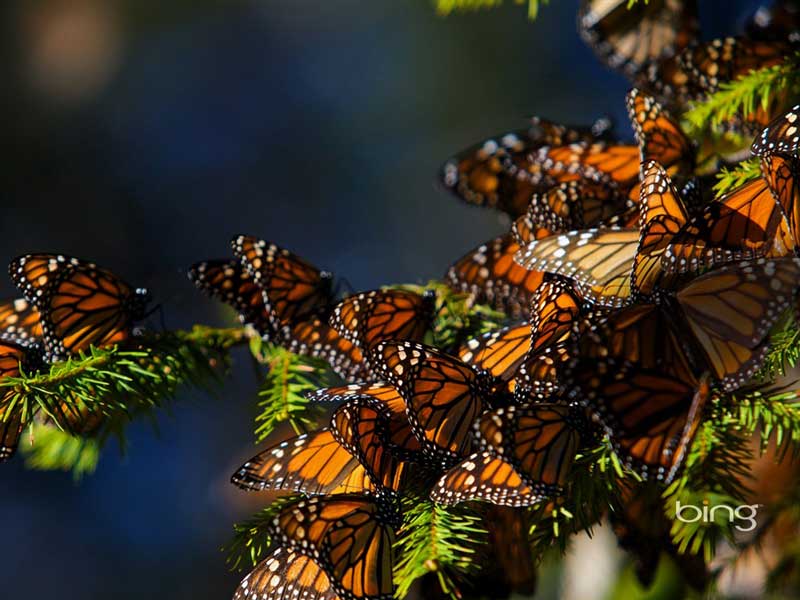 Photo from www.10wallpaper.com
Migrating monarchs gather on this branch during their annual trek.

Freezing kills an animal by increasing the concentration of dissolved substances in its cells to a lethal level, and also from ice crystals that grow large enough to rupture the cells. As protection against this, some insects isolate ice crystals between cells where they can form without damage.

Fish, it has long been known, also produce an antifreeze compound and experiments are under way investigating its use in frozen food to prevent ice crystal formation. It has recently been discovered that mealworms produce an even better freeze-protecting substance, a protein 100 times more effective than the antifreeze of fish.

Another way for animals to survive the cold is to leave. They migrate when the seasons change. Monarch butterflies are probably the migratory champions of the insect world, traveling as far as 2,000 miles. Those east of the Rocky Mountains go south to central Mexico, while those from the west side travel to Southern California for the winter, where in some locales they cover the trees like an orange blanket. There have been reports of limbs breaking from their combined weight. There, in a rather sleepy state, they wait for their internal clocks to tell them that the days are again long enough for them to return home.

Finally, here’s the bad news. If you are comforted by the belief that severe winters reduce the numbers of mosquitoes and other biting insects next spring and summer, think again. Overwintering insects survive in sufficient numbers that there are more than plenty of them ready to start over next season. Insects whose adults can’t overwinter leave plenty of eggs, larvae, and pupae which get through the winter just fine and will guarantee lots of new adults in the spring. The insect population differences during a spring following a hard winter as opposed to a mild one are hardly enough to measure. Sorry about that. Happy Frigid New Year anyway!