Once upon a time East Texas was pretty much empty of people. Pine forests, interspersed with lowlands and streamside woodlands covered the region. Wild animals were everywhere. Then, we came along – Homo sapiens, humans, 2-legged skulking varmints. We commenced to hack down the trees for firewood and building materials and to provide a clear field of fire to prevent other people from sneaking up on us. Since we weren’t too good at living entirely off the land, we tore it up with plows and planted civilized crops. Generally, we were pretty successful. And people being the way they are, we began to prosper. You could tell that by how rapidly we multiplied – not quite as fast as rabbits, but close. 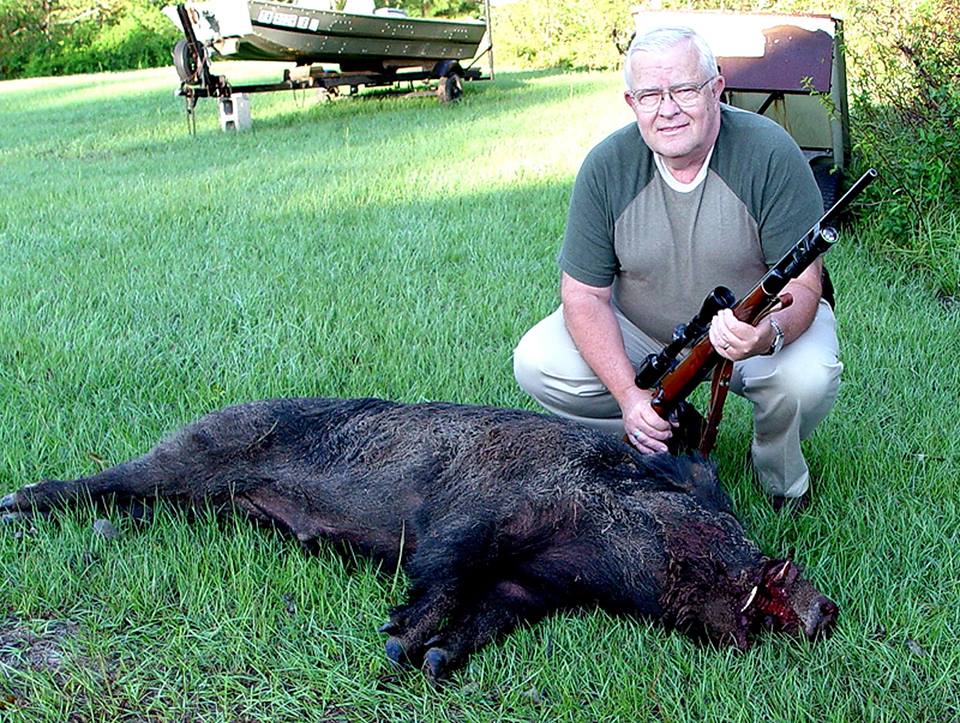 Photo by Paul H. Risk
A large boar/hog that debated ownership of my backyard, and lost. Three more escaped.

Family plots became farms, farms became corporations, small industry became major enterprises, settlements became villages, then towns, cities, metropolises, and megalopolises, and lo and behold, you couldn’t even recognize the old place anymore. I remember as a kid when I used to hunt rabbits in Farmers Branch with only a few scattered farms around.

As all this growth was taking place right smack dab in the middle of wildlife habitat, the wild critters had to move. And that was all right with us because most of the people living in towns and cities were just a little spooked by the idea of wild animals. They’d become citified flatlanders.

So, here we are in the 21st century, camped out in our temperature and light-controlled growth chambers with attached garages to accommodate our gasoline-powered, mobile environmental chambers, and surrounded by wild critters. Does that give you an uneasy feeling? What if all the wild varmints got organized and decided they wanted everything back? CUAH – Critters United Against Humans. Pronounce it Coo-ah! Sounds a little like the military Hoo-Ah!! Hmmm. Just a thought.

Actually, we’re pretty well infiltrated already. There’s been no frontal assault, just sly, mostly nonviolent, infiltration. Raccoons, coyotes, and possums roam through city neighborhoods, raiding garbage cans and eating pet food – and pets – left outside. Skunks saunter boldly through urban landscapes, scavenging meals. Cougars have been sighted leisurely sunning themselves in local backyards. Nervous yet? In California, cougars and coyotes have attacked joggers, bicyclists, and small children. Alligators grab small children in Disney World. Some folks say bears are on their way back to East Texas. Remember Alfred Hitchcock’s movie “The Birds?” Are sullen, irritated, resentful birds gathering in growing numbers in trees and along your power lines? How about all those vultures circling overhead? What do they know that we don’t?

Our home is barely outside the city limits, a mere stone’s throw from schools, shopping centers, and urban sprawl. Yet the variety of wildlife we see is amazing. Foxes, bobcats, coyotes, and roadrunners dart across the road ahead of our car and run up the driveway. Armadillos waddle along, deer graze the grass. Our peach trees are magnets for wild creatures. A few years ago a bunch of wild hogs practically destroyed our backyard, although they didn’t all survive that brazen foray. Our upstairs back bedroom makes a great sniper’s nest. One result is shown in the illustration for this column. Coyotes roam in packs, serenading us only a short distance from the house. Crows maintain a constant surveillance as our peaches and pecans ripen. Our squirrels are also expert peach and pecan thieves.

What about cockroaches, millipedes, centipedes, spiders, scorpions, flies, fleas, ticks, gnats, mosquitoes, and myriad other insects and arachnids? Mice and rats and snakes? They’ve learned to live with us quite well. Are they the first wave of a counter-assault?

There’s a lot more of them than there are of us! What if wild nature is just on pause, getting organized? Perhaps there’s a boss hog out there secretly promising change and a better world to the denizens of the wild. Hogs are smart, and they do multiply like rabbits.

Then imagine for a minute what would happen if we stopped weeding, mowing, blacktopping, sealing, pruning, painting, and building handicap ramps to nowhere? We’ve all seen deserted buildings and homes crumbling back to earth as grasses, weeds, shrubs, and trees reclaimed them while animals again occupied land they had only temporarily allowed us to use.

I can see it all. A grizzled old-timer stands reminiscing, gazing at a forest tangled with green briar vines, where wild hogs reign supreme. “Yep,” he says. “Ah kin remember whin thar wuz a good sized city raht heah where these trees is! Used to call it Naca-something. Oh, I remember. It was called Nacogdoches, but now it’s just hog heaven.”

Nah! Never happen. I’m just having fun with you. Probably. But don’t tell that to the wild hogs that abound in the fields and forests of East Texas. Might get ‘em upset.