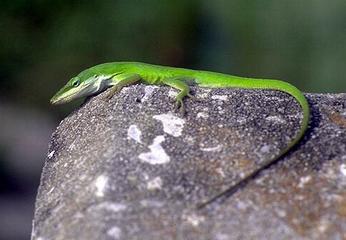 Photo by James Harding, MSU
A green anole suns itself on a warm rock to raise its body temperature and activity level before a dinnertime insect hunt.

Anoles are not frogs, they’re lizards so Kermit need not feel threatened. If you’re old enough you may remember, as I do, that vendors used to sell these live green lizards at the Texas State Fair in Dallas Advertized as chameleons, pitchmen had big flannel-boards covered with them. Each one had a little string leash with a safety pin on the end to attach your new friend to your shirt. They had the ability to change color to blend in with their background. Since they were displayed on green flannel, their color was invariably bright green when purchased, but they quickly altered their appearance to somewhat approximate the color of my shirt.

Actually, those 6-8-inch reptiles I bought weren’t chameleons at all, even though some references call them “American chameleons.” They are really anoles (Anolis carolinensis), sometimes called green anoles. Real chameleons are native to South America, Africa and the Middle East with some two-thirds of them found only on the island of Madagascar. Chameleons change color depending on their mood and the hue of the surface they’re on as do anoles, but they are longer and bulkier than anoles and have the strange ability to move their eyes independently to focus each one on a different object, giving them the appearance of needing eye muscle surgery. Their eyes also bulge outward allowing them to rotate so much they can see ahead with one eye and behind with the other. Anoles can’t do this.

The lizards I bought at the fair are native the entire southeastern United States, Central and South America, and islands in the Caribbean. Tree dwellers, they feed on insects such as crickets, roaches, moths, grubs and spiders. Their water needs are met both from their food and by licking dew or water droplets on vegetation when it rains. Color changes are largely limited to grayish-brown, brown, and various shades of green.

Anoles are common throughout East Texas and I recently saw one perched on our mailbox. One or two often hang out near our back door. Sticky pads on their feet allow them to easily cling to vertical surfaces. They seem to like brick walls and rocks, probably because they are cold-blooded and those warm surfaces help them remain active in cooler weather. Cold-blooded animals don’t generate metabolic heat by oxidizing food as we do and are, to a great extent, at the mercy of the outdoor environment and air temperature. When conditions are unfavorable, either too hot or too cold, they shelter in dead leaves, under rocks and logs and other protected locations or sun themselves to warm up.

Male anoles have an expandable skin flap under their chin and chest called a dewlap. Like a small, bright pinkish or reddish fin or sail, they expand the dewlap when courting or threatening intruders.

Birds, snakes, other lizards, raccoons, some rodents, and a wide variety of other predators eat anoles. Domestic cats, mine included, find them particularly tasty and can pose a severe threat to their numbers. A particularly interesting adaptation is the lizard’s very fragile tail. If an attacker isn’t fast enough to grasp the lizard’s body, all they are left with is a mouthful of squirming tail that snapped off during the assault. The anole then grows a replacement tail, although it is often shorter than their original issue model. We have had several short-tailed models at our house – monuments to their speed when Hobbes, our cat, snatched at them.

Anoles are beneficial in controlling insect pests, well-adjusted to living in close proximity to people, and I like to think of them as friendly, although their tiny reptilian brain likely doesn’t regard me at that level.

In any case, most of the lizards bought at the State Fair undoubtedly died because owners had neither the knowledge nor the desire to take care of them properly. Mine were turned loose after a few days and I like to think they went happily about their lizardine lives hardly the worse for “wear”!