If ants think, ant lions ought to make them very afraid. In my imagination, I can hear momma ants sitting around in the evening telling bedtime stories, warning their offspring to stay away from steep, sandy funnels where these voracious creatures live. “Don’t even think about getting near them, ‘cause if you get by the edge, you’ll fall in and the monster at the bottom will eat you up!! Now go to sleep!” Guess what? She’s right.

Most of us have seen the small cone or funnel-shaped sand traps (yes golfers, sand traps) that ant lions make to catch their meals. And they’re back again this year, popping up in open areas of fine sand now that the Monsoons have stopped for a minute.

When I was a kid, and dinosaurs still roamed the earth, we called these tiny predators doodlebugs, and also called pill bugs by the same name. Don’t ask me why. We took pleasure in dropping ants into the traps to watch the “lions” and the gladiators battle to the death. I know, I know. That’s perverted. But I was a boy. And you know about guys: We’re kind of strange, even at best.

Ant lions are the larvae of lacewings. Adult lacewings resemble very graceful, delicate dragonflies, and are most active at night, so we seldom see them. They feed on pollen and nectar and look nothing like their ugly larvae. Momma ant lions probably love their tiny, toothy tots anyway. Although their small brains may not actually process that emotion.

Only ¼ to ½ inch long, ant lions have long, curving jaws with venom channels that they use to catch and kill their prey. Dry, sandy spots protected from rain are their favorite habitat. In these areas, it’s common to see dozens of their funnel or cone-shaped traps, that vary from ½ to 1½ inches across and about an inch deep. To make the traps, an ant lion carefully flips out grains of sand in a circular, deepening cone around itself that is an inch or more in diameter. The snare works for the same reason sand dunes take on their characteristic down-wind shape. Any kind of sand can only be piled up to a certain angle before it starts sliding back down again. That is called its angle of repose, and is determined by the size and shape of the sand grains. 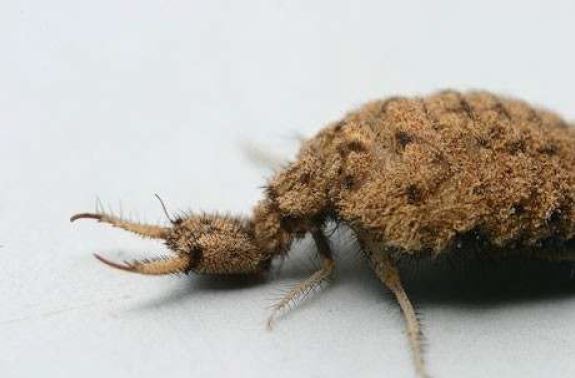 Photo by Jonathan Numer
ant lions have long, sharp, venomous jaws. They lie at the bottom of their funnel-shaped sand traps waiting to grab a careless insect or spider.

Once the trap is completed, the ant lion buries itself at the bottom of the cone with only its needle-sharp jaws showing. The sand traps are carefully made so they are barely able to hold their shape, and the moment an ant, small insect, or a spider steps on the edge, a mini-landslide takes place. The prey tumbles to the bottom and the ant lion’s jaws snap shut and suck out the body fluids of their meal. Then the empty husk of the prey is flipped out of the cone. The trap is repaired and the occupant again buries itself at the bottom to await the next snack. Even if the ant lion doesn’t get a firm hold on the first grab, there’s no escape for the prey. The sides of the pit are too steep, and the sand keeps slipping back to the bottom of the hole, along with the hapless victim, until the “lion” successfully latches onto its meal.

Now, back to golfers and sand traps. Do you suppose one day, in the “Twilight Zone,” you’ll ever run across a Doberman-sized predator lurking at the bottom of that sand trap you just lobbed your last shot into? Naw! Of course not. Or maybe not. Probably not. But as Ebenezer Scrooge said of ghosts, “you never know.”