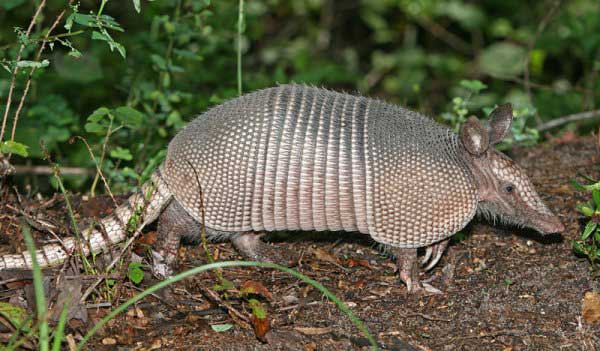 Photo by Vincent P. Lucas in Wikipedia
These armor-plated jumping jacks called armadillos seem to be appearing in large numbers this fall.

Fall is upon us, and so are armadillos. Actually, I seldom see one that’s moving, only the results of their fatal fascination with highways. Bloated and round with their feet in the air, flattened like scaly pancakes, hollowed-out shells left over from buzzard buffets, or just lumpy little speed bumps, they seem to be in greater numbers than usual this year.

When armadillos encounter motorists they often leap a foot or more into the air before trying to run, and in that lies their meeting with eternity. This terminal behavior can also be hard on your car since their high-jump can put them right in the middle of your grille!

However, armadillos show no signs of becoming extinct. They were well known even by the ancient Mayans, who called them Azotochtli - turtle rabbit. Fossilized armadillo remains indicate these little jumping tanks existed as far back as fifty million years ago. Talk to gardeners and homeowners who have experienced an armadillo attack on their lawn or flower beds and you won't find a lot of warmth expressed toward these walking fossils. Nosing around for insects and larvae, armed with sharp claws and powerful legs, armadillos root up grass, flowers, and other plants, leaving ugly holes and ruts. An older lady friend of our family takes particular pleasure in cruising her yard at night with a flashlight in one hand and a pistol in the other, blasting armadillos out of their socks. Others say spreading moth balls around plants is a sure way to repel them.

Dinner for armadillos is usually insects and grubs, but they also eat berries and bird eggs, and their long, sticky tongue helps them slurp up ants and other small delicacies. If you'd like to see one, they are most active during the night, so midnight or later is a good time to look. Although armadillos are generally found roaming around on land, they are also at home in water and can dog paddle after gulping air for buoyancy, and walk underwater along the bottoms of streams and ponds.

Armadillos mate in July and give birth in March, always producing identical quadruplets formed from the same egg and nourished in the mother from the same placenta. They are the only mammal known to regularly produce multiple young from a single egg.

There are about twenty kinds of armadillos in South, Central, and North America, varying in size from the fairy armadillo weighing in at a mere 4 ounces, to a giant armadillo weighing up to 130 pounds. Our nine-banded armadillo is usually about the size of a cat, weighing 8-17 pounds. Their head, neck, back, tail, and legs are protected by a tough material similar to our fingernails and arranged in plates called scutes. However, these plates aren't very hard and even a medium sized dog can bite through them.

Some people say armadillos are delicious when properly cooked, although I’ve never sampled them. But beware, a potentially dangerous characteristic of these animals is that about 15% carry leprosy. At least one Texas health alert warned that they should not be handled. It also warns that people digging in soil inhabited by armadillos ought to wear gloves. Once the flesh is cooked, there is no danger. Leprosy can be successfully treated with several modern drugs but in my opinion, there are many less risky dinner entrees.

Dinosaurs have long since become history, but Texas' turtle rabbits, that lived not long after, are still alive and jumping and are fascinating, unique, and even sort of cute in their own crusty, homely way in our fields and forests.