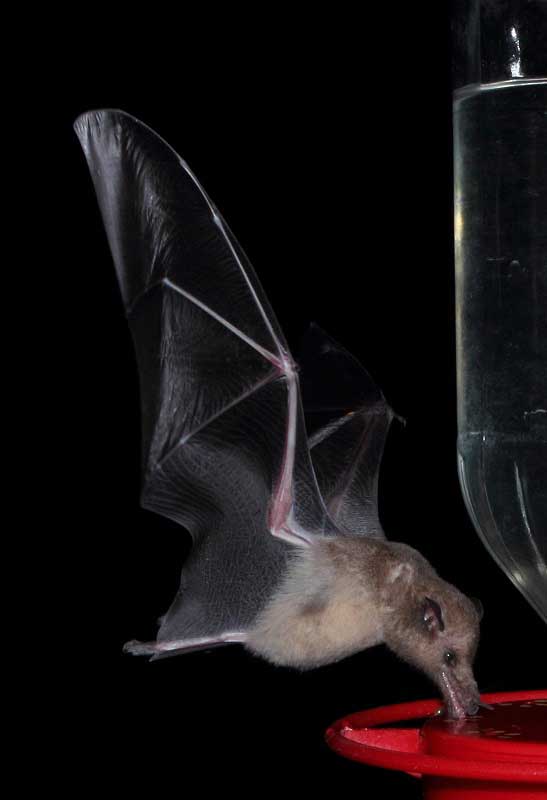 Bats are fascinating, flying mammals. Those we see in East Texas are generally insect eaters. In Mexico, Central, and South America there are vampire bats that feed on blood. They cut a neat little incision near a blood vessel of cattle, horses, or occasionally people, and drink their fill.

Fruit eating bats are very uncommon in Texas. However, we have a son who lives in southern Arizona and Mexican long-nosed bats are common around his home.

Mexican long-nosed bats do occur from time to time in extreme SW Texas, but rarely. Their diet is nectar and pollen. With a tongue that can be as long as 1/3 of their body length, they can reach the bottom of long cactus and ornamental flowers with ease.

To me they’re kind of ugly customers, although I suppose their Moms don’t think so. With long snouts sporting a leaf-like projection on the front end, and lots of teeth, they look a little creepy to me. I know that’s not a scientific reaction. But, so be it. Common in much of Mexico and southern Arizona, these bats are also seen in southern California and New Mexico. They range down through Central America and into Venezuela.

Although they ordinarily eat nectar and pollen, these fruit eaters are frequent visitors to hummingbird feeders. At my son’s home they literally swarm his feeders looking for a sweet treat. During the early season before flowers begin appearing in large numbers, feeders can be an important temporary food source. The same is true at the end of the season as flowers decline. However, hummer food lacks some of the nutrients required for long-term bat diets.

“Blind as a bat” is an example of bad information. Bats can see just fine, but like submarines, they rely to a great extent on sonar, emitting sounds far above what humans can hear, allowing them to fly in total darkness and find their meals. Their bursts of sound operate almost like scanning and targeting radar on a fighter plane. When sound impulses bounce off a flying insect, the bat’s transmitted beeps get closer together so that they don’t lose track of their swerving, fleeing prey.

Hardy and adaptable, bats such as the Mexican free-tailed sometimes fly up to two miles high to feed, or catch tail winds that carry them over great distances at speeds up to 60 miles per hour. Some are also long-lived. Fido may be older than dirt at 15, but the little brown bat sometimes lives more than 30 years!

Bats can carry rabies, which is normally transmitted by bites, but exposure can also come from contact with open wounds or the eyes, nose or mouth from infected saliva or nerve tissue.

Bats in Texas live in caves, rock crevices, hollow trees, attics, under bridges, and yes folks, you can even have “bats in your belfry.” But if you know that bats are living in your home, seal entry points and call an exterminator.

Rabid bats are generally not aggressive. They simply become sick and lethargic and crawl away to die. Never handle bats, especially those that are behaving strangely or appear to be sick. Although most bats are not rabid, any bat bite should be washed thoroughly with soap and water and reported to a physician. If a bed-bound, unconscious, or paralyzed person is found to have a bat in their room, especially if there is reason to believe it was there all night, the Texas Department of Health recommends that a health care professional be contacted, since bites are often very hard to see.

These little creatures are generally good neighbors, and in many communities folks put up bat boxes to encourage them to stick around and munch-a-bunch of bugs. Since this encourages potential rabies carriers to live in close proximity to people, I’m a little uneasy about this. Bat Conservation International members strive to protect bats, and you can find out much more about them at their www.batcon.org site.

So, take time to watch the twilight evening sky and enjoy these little winged mammals. They’re Texas’ own Mousketeers, dedicating their lives to mosquito control!