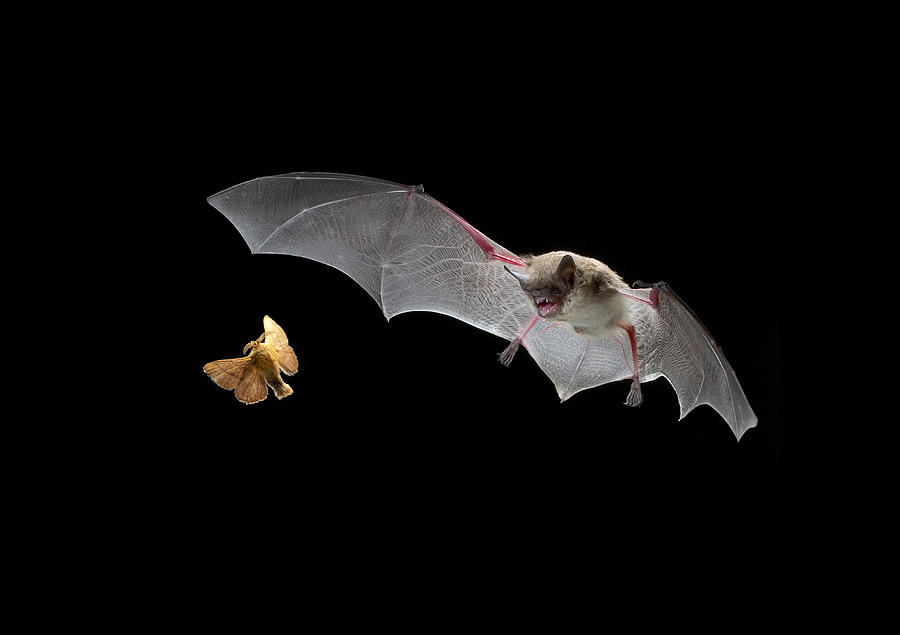 Photo by Kaitlyn Claire Levenson
Bats use echolocation to “see” their prey at night.

They flicker through the skies beginning at twilight and throughout the night, flap their parchment-like, featherless wings ominously in horror films, appear as silhouettes at Halloween and in the skies of Gotham City when Batman is needed, have an opera named after them (Der Fledermaus, or The Flying Mouse), and have been featured in folklore for generations. Their reputations are unfortunately tarnished by many unwarranted accusations such as the beliefs that they try to tangle themselves in women’s hair, and are Count Dracula’s human-blood-drinking cohorts. (There really are vampire bats, some of which are found in Texas, but they feed on the blood of animals such as cattle and wildlife, not humans.)

Giving birth to live young and suckling their babies on milk, bats are mammals, and their adult diets are as varied as their types. Dinner, according to the type of bat, may be pollen, fruit, insects, blood, frogs, scorpions, or centipedes. The ones most people see cruising the darkening skies around homes and fields are predominantly insect eaters. At least 38 different types of bats are found in the Lone Star State.

Bats can carry rabies, which is normally transmitted only by bites, but exposure can also come from saliva, body fluids, or nerve tissue getting into open wounds or the mucous membranes of the eyes, nose, or mouth when someone handles a sick or dead bat.

Amazingly, in the 1950s there were at least two cases in Texas of humans contracting rabies from airborne virus. The victims were exploring bat infested caves near Uvalde, Texas and apparently inhaled the virus. More often, careless handling is the prime source of rabies exposure from bats. Rabid bats are generally not aggressive. They simply become very sick, lethargic and often paralyzed, falling to the ground and dying. Although most bats are not rabid, any bat bite should be washed thoroughly with soap and water and reported to a physician. Never handle a bat, whether it appears sick or not. Dead or ill bats should be reported to your local health department or animal control.

Insect eating bats are voracious feeders, and a single little brown bat can catch 600 mosquitoes in just an hour. It has been estimated that the 20 million Mexican free-tailed bats from Bracken Cave in Texas eat 250 tons of insects each night! Insect mamas living near the cave better keep their kids at home! But, they’re a big help to people who don’t like swarms of mosquitoes and other night flying insects.

Bat senses are truly amazing, and “blind as a bat” is just another example of misinformation. Bats can see just fine, but like submarines, they rely to a great extent on sonar, emitting echolocation sounds far above what humans can hear, that allow them to fly in total darkness and find their meals. Their bursts of sound operate almost like scanning and targeting radar on a fighter plane.

Photo courtesy of Wisconsin Department of Natural Resources
A cluster of little brown bats huddle together to conserve heat.

Some bats, like our little brown bats, emit very high-intensity sound bursts and are referred to as “shouting” echolocators. Their sound blasts out at over 110 decibels (about the same volume as a smoke detector). In contrast, vampire bats target their dinner with emissions of only 60 decibels; about the same volume as normal conversational speech. They’re called “whispering” bats. Remember, the frequency of the bat’s sonar is too high for us to hear, even though it’s very loud.

Hardy and adaptable, bats such as the Mexican free-tailed sometimes fly up to two miles high to feed, or catch tail winds that carry them over great distances at speeds up to 60 miles per hour. Some are also long-lived. Little brown bats sometimes live longer than 32 years!

In many communities, folks put up bat boxes to encourage them to stick around and munch-a-bunch of bugs. If you choose to do this, I’d recommend that the boxes not be too close to the house for possible disease transmission reasons. If you’re interested in learning more about bats, there is a group called Bat Conservation International whose members strive to protect bats.

Take some time to watch the twilight evening sky and enjoy these little winged mammals. They’re Texas’ own Mousketeers or Mice in Black, dedicating their lives to insect control!