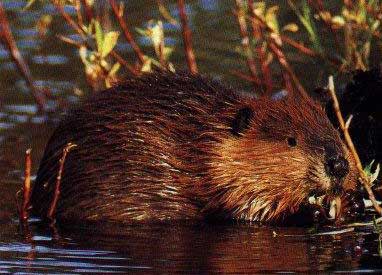 Photo courtesy of Illinois Department of Natural Resources
Even though it has a flat scaly tail and swims, this beaver is not a fish!

Beavers swim, live in lakes, and have scaly tails. So, are they fish? Long ago mountain men discovered that beavers were tasty critters. But, Catholic trappers were concerned about eating meat on Fridays. An inquiry sent to the Catholic hierarchy, and based on the previous description, resulted in the decision that they must be fish, so go ahead and eat ‘em on Friday. Obviously, there were not any bishops educated in wildlife biology.

In those days, beavers were sought primarily for their fur. It was shredded and compressed to make beaver felt hats that gentlemen in Europe wore as a fashion and status statement. Later on, the market dropped through the floor as demand for beaver hats suddenly declined, and many trappers lost their shirts in the declining market.

By that time, beaver had been so thoroughly over-trapped that their populations were terribly depleted, and beaver trappers couldn’t make a living even if the hat market hadn’t crashed.

Nowadays, these furry, flat-tailed animals are rapidly overpopulating many areas and are considered pests. They dam up streams – a task at which they are expert – and flood out grazing and crop land, causing millions of dollars of damage. Show a beaver running water and it’ll make a personal vow to plug it up. Recently I’ve had several calls from people about beavers chopping down trees on their property. And, a beaver even showed up in a swimming pool in Waterford. Sounds reasonable. If I were a beaver and had an option, I’d like clear, clean, heated swimming too. One even wandered into a home under construction in Colony Creek on Old Post Oak Road a few years ago, presumably checking it out for homesteading.

Beavers are speedy and graceful swimmers using their webbed hind feet as paddles and muscular tail for additional thrust and steering. Although they can not breathe under water, beavers are able to stay down for as long as fifteen minutes. Try that when you get bored. When they dive, flap-like valves in their ears and nostrils close to keep the water out.

These swimming “rats” prefer to eat tender herbaceous vegetation, but they also dine on the inner bark of aspen, cottonwood, willow, maple, and other tree species. Typically, they cut trees 3-4 inches in diameter, but I have seen aspens out west as large as 18 inches felled by beavers.

Although saws are notoriously dangerous, cutting down trees with your teeth is far more risky. If the flat-tailed little logger misjudges, the falling tree sometimes costs him his life. 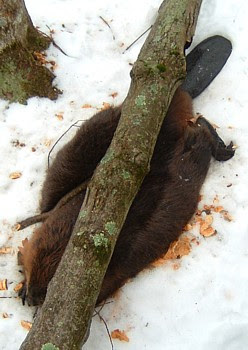 For winter food, especially in snow country, beavers cut short lengths from small trees and branches and stick them into the bottom of the pond near their lodge where they can easily snack on them without leaving the water. A family of six beavers can dispatch 1,000 pounds of trees in a year.

Beavers pair for life and live up to 20 years. Mating in winter, three or four young “kits” are born about 3 ½ months later. By two months of age, the young beavers have been weaned, and spend the next year or so helping with family chores. Adults, kits and yearlings live together in family groups of 10-12 individuals, but during the spring of their second year, their parents usually evict them.

If you find yourself up to your ears in unwelcome eager beavers, the law in Texas allows you to deal with them however you see fit. Here in the land where the buffalo roamed you can trap ‘em, shoot ‘em, or speak to them with discouraging words. As long as you destroy them, you don’t need permission, but if you trap or hunt them and retain their pelts, you’ll need a license. There are also professional trappers who can help you control them.

Since beavers are mostly nocturnal, you won’t see much of them, but they are well established in East Texas. If you want to observe them, look for their dams at the outflow of a pond or lake, or their lodges in deeper water. Sit very quietly, and if you’re lucky you may see the graceful “V” wake of one of these interesting rodents as it patrols its territory, or hear the pistol-crack sound of their tail slapping the water as a danger signal, alerting others of your intrusion into their domain.