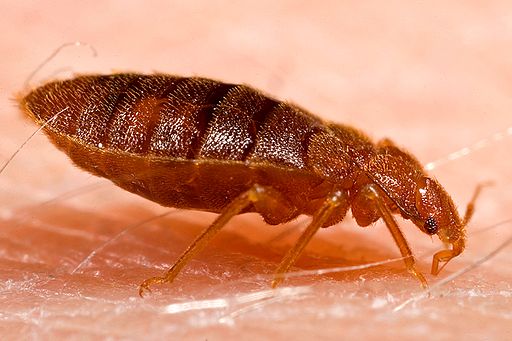 As a biologist, few creatures “creep me out.” But there are a few. Bed bugs, for instance. Frankly, the thought of them makes my flesh crawl, and sadly, they are making a big global comeback.

Bed bugs have been sharing abodes with humans since ancient times. According to Wikipedia, bed bugs were mentioned in ancient Greece as early as 400 BC.

Although nothing should surprise me anymore, some medical treatments stagger my imagination. “Pliny’s Natural History, first published about AD 77, claimed bed bugs had medicinal value in treating ailments such as snake bites and ear infections. During the early 18th century some practitioners recommended their use in the treatment of hysteria. Is that hysterical or what? Amazing!

The same source says, “bed bugs were first mentioned in Germany in the 11th century, in France in the 13th century, and in England in 1583, though they remained rare in England until 1670.”

Increased international travel, particularly from the middle east, Africa, Europe, Central and South America, has allowed these hitchhiking pests to spread around the world. They are now a major pest globally and are spreading like wildfire in the United States.

Once associated only with grubby flophouses and filthy homes, today elite 5-star and even more exclusive resorts and hotels often harbor these sneaky critters.

Only about a quarter of an inch long, bed bugs don’t fly, but they crawl rapidly. Reddish-brown with a flattened body, they are most active at night, hiding in mattress seams, bed frames, and headboards, even in electrical outlets in walls. When you lay your warm, carbon dioxide exhaling body down for the night, out they come like little crawling vampires to drink your blood.

A bed bug pierces its victim with two hollow needle-like mouthparts. With one they inject anticoagulants to keep your blood flowing smoothly, and an anesthetic so you don’t feel the bite. The other sucks in blood.

Female bedbugs lay 4-5 eggs a day; up to 200 in their life span. The eggs hatch in 10-17 days, and the immatures begin feeding immediately.

Although they carry up to 28 human diseases, there is no evidence of transmitting them to people. Bites usually appear as little red bumps. Sleeping in an infested location may bestow upon you as many as 500 bites in a single night.

These little intruders can live up to a year without eating, although they generally try to feed every 4 or 5 days. It takes about ten minutes for one to drink its fill. Satiated, the stuffed critters crawl back into hiding until their next victim arrives.

To find out if you’re sharing your bed with these unwelcome visitors, at home or staying in a motel, closely examine mattress and upholstered furniture seams for the sneaky pests. Bedbugs go through several molts as they grow, leaving behind brownish shed “husks.” They also leave little black droppings and blood spots on sheets and other fabric. If you find them in a commercial hotel or motel, ask for another room, or check into a different place.

In a motel, put your luggage on a stand, not the floor or on the furniture. Otherwise you may bring hitchhiking bed bugs home in your bags.

There are numerous bed bug control chemicals on the market, but most are not very effective. Professional pest control specialists are usually required.

They use a complex combination of treatments, and even they are not always successful. One bit of advice. Never buy a used mattress or other second-hand upholstered furniture or luggage unless it has been thoroughly fumigated.

Do we have these critters in East Texas? Oh yeah! Absolutely. If you haven’t experienced them yet, it’s probably only a matter of time.

So, I leave you with these age-old evening words of wisdom. “Nighty night, sleep tight. And don’t let the bed bugs bite.” And good luck. Sorry to end on this pessimistic note.