It’s Christmas time again. Orion, the Pleiades, the Hyades, Gemini, and Sirius, the brightest star in our heavens, like scattered, shattered fields of diamonds, spread brilliance across the night sky, bringing tranquility and peace of mind.

Our modern Christmas season is a complex blend of ancient pagan Roman beliefs, Christian dogma, and more recently and sadly, political “correctness.” Holly for luck and divine blessings, mistletoe for kisses, lighted evergreen trees symbolizing eternal life. Tinsel and sleigh bells, Santa and elves, credit cards and sales, turkey and dressing, greed, avarice, and the coveting of material goods, have blurred and distorted the reason for the season.

But, through it all, my childhood reverie and nostalgic recollections of Christmas past still control my thoughts and emotions. I visualize awe-struck shepherds quietly watching their flocks by night in the hills near Bethlehem as an angel suddenly appears to them and announces, “Fear not: for, behold, I bring you good tidings of great joy, which shall be to all people. For unto you is born this day in the city of David a Saviour, which is Christ the Lord…And suddenly there was with the angel a multitude of the heavenly host praising God, and saying, Glory to God in the highest and on earth peace, good will toward men.” 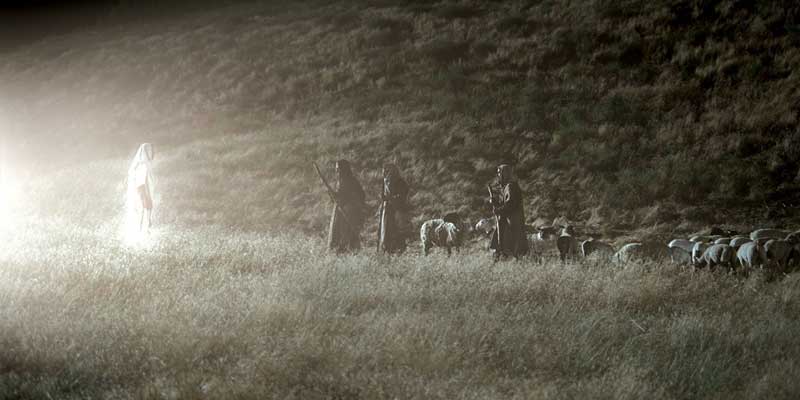 Photo courtesy of The Church of Jesus Christ of Latter-day Saints
Shepherds stood awe-struck as the Heavenly messenger delivered his message.

How peaceful indeed would have been the star-studded night the shepherds of olden days experienced near ancient Bethlehem. So bright would the starlight have been that you could have seen just by the stars’ gleaming brilliance.

I think of wise men bringing priceless offerings of gold, frankincense, the aromatic resin of Boswelia trees found in Arabia and Somalia and worth more than its weight in gold, and myrrh, a fragrant resin from East Africa and Arabia.

Yet peace on earth seems forever elusive and fleeting. Wars rage around the globe. Hate rather than love seems to be the order of the day. Poverty, hunger, starvation, and illness ravage millions of people. The raging seas of life seem too often to dash hopes and dreams on the rocks of painful reality.

Life is challenging and often painful, but we have a choice. We can either focus on the unpleasant times, or not.

When I was fifteen years of age my mother unexpectedly died, and a little over two years later, and just before Christmas, my father suffered a heart attack, and died on New Year’s Day. I was an only child and on my own from that day forth. Since then, Christmas has been a season of mixed emotions for me.

But during the time I had my parents, Christmas was a sacred, warm, exciting, and magic time. My memories of those years are strong and happy and continue to color my Christmases. Still, I struggle a bit during this season. And, I’m obviously not alone. The stresses of life bear heavily on many people this time of the year.

I heard the bells on Christmas Day
Their old familiar carols play.
And wild and sweet the words repeat
Of peace on earth, good will to men.

I thought how as the day had come
The belfries of all Christendom
Had rolled along the unbroken song
Of peace on earth, good will to men.

Then his sadness overwhelmed him as he wrote:

Finally though, Longfellow’s dark mood appears to have given way to hope as he penned the final verse of his poem:

Photo from www.telegraph.co.uk/science/
Church bells ring out the glorious news of Christmas.

Then pealed the bells more loud and deep;
God is not dead, nor doth He sleep;
The wrong shall fail, the right prevail,
With peace on earth, good will to men.

Till, ringing singing, on its way,
The world revolved fro night to day,
A voice, a chime, a chant sublime,
Of peace on earth, good will to men!

Perhaps this year we can each carry Christmas with us in our hearts and actions throughout the year. I wish you a merry, fruitful, spiritually uplifting and thoughtful Christmas. May “peace on earth; good will toward men” become a living reality in our community and around the world.