Photo courtesy of The Texas Breeding Bird Atlas – Texas A&M University
This Chuck-wills-widow is very difficult to see from a distance in the leaves on the ground.

Night is one of the more pleasant times in the East Texas fields and forests during late spring and early summer. Night outings not only reveal interesting animals and birds, but also the “music of the night.”

In a few days one of the loudest birds in the East Texas night will begin singing. Called Chuck-will’s-widow, this big-mouthed night-flying bird has a distinct snapping or chucking sound as the first syllable of their three-part song. To me it sounds like “Chuck! Will! Will!” or “Snap! Wheedle! Woo!” To hear click this link to Chuck-will’s-widow call, then scroll down to the “calls” recording. Chuck-will calls are often mistaken for their relative, the Whip-poor-will, but the two actually sound nothing alike. To hear the difference click this link Whip-poor-will call and go to “calls.” Both recordings are on the Cornell Lab of Ornithology web site.

Once a Chuck-will blurts out one call, personal fulfillment apparently demands that it repeat it, over and over and over and over, sometimes for as long as an hour without pause or laryngitis. At close range, and ounce for ounce, these 9 to 11-inch birds belt out a call that can only be described as bone-jarringly loud. Most of the time I hear them at a distance so their call is a pleasant accompaniment to other night sounds. Chuck-will’s-widows generally sing in the evening and morning, but when the moon is full, they may vocalize through the entire night. 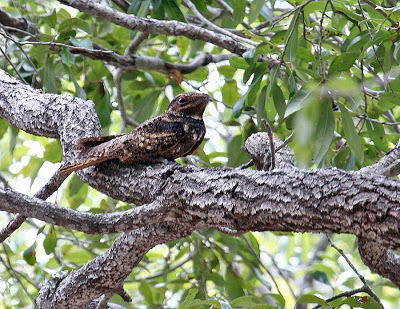 The Chuck-will’s-widow, like the Whip-poor-will (which also migrates through East Texas) is in the Goatsucker family, members which includes Poor-wills and nighthawks. A relative of the Whip-poor-will called the European nightjar, has the mythical reputation of sneaking up on unsuspecting goats and drinking their milk.

All wills and widows are leaf-brown and camouflaged so well that an observer within only a few feet may not see them. Perching length-wise on branches rather than cross-wise like most other birds makes them very hard to spot.

Whip-poor-wills and Chuck-wills are night flyers, with rounded wing tips. They fly like they barely passed flight training and are still practicing. Resembling a giant brown moth flitting erratically through the evening sky, they swerve and weave, scooping up flying insects. Their gaping mouth, fringed with stiff hairs, helps them scoop up flying insects, and is so wide they can even scoop up June bugs, grasshoppers, and large moths, as well as smaller fare such as mosquitoes and gnats. Some bird experts say they occasionally eat bats.

Nighthawks, which look similar to wills, are also out at night, often flying around street lights dining on the swarms of insects attracted by the bright illumination. You can tell the difference because nighthawks have narrow, pointed wings with a distinct white marking on them, in contrast to the wills broader, rounded wings.

Whip-poor-wills and Chuck-wills both nest on the ground, laying two eggs marked with brown, yellowish-brown, and purple markings, in deep underbrush on old leaves, pine needles, or decayed wood. When their nest is discovered, they sometimes put on an impressive performance by fluttering around as though they have a broken wing, gasping and flapping to lure predators away from the nest site.

Loud-voiced, bug-eyed, big-mouthed, fuzzy-beaked, nondescript, clumsy-flying, moth-like birds. There’s a description only a mother could love! Nevertheless, these migrants lend a magical quality to our summer nights. Take the time to go outside and listen. Nothing in the woods sounds anything like them, and you’ll add one more great experience to your ventures into East Texas’ fields and forests.