Every year, giant, buzzing, lethal-looking wasps begin zooming around our yards. These almost 2-inch long insects are called cicada killers and are actually quite docile toward people. They seldom sting unless they are caught in your clothing or handled, but their rusty-colored wings produce a buzz like an attack bomber and the sound alone sends chills down the spine of those who are jumpy around bees and wasps. However, people who have managed to get stung say they don’t pack as much wallop as other wasps. With yellow legs dangling, these big wasps have a black abdomen with yellow markings and look a little like a giant yellowjacket. They’re often seen cruising around the lawn, through the branches of trees, or chilling out on a shrub trying to attract a mate. 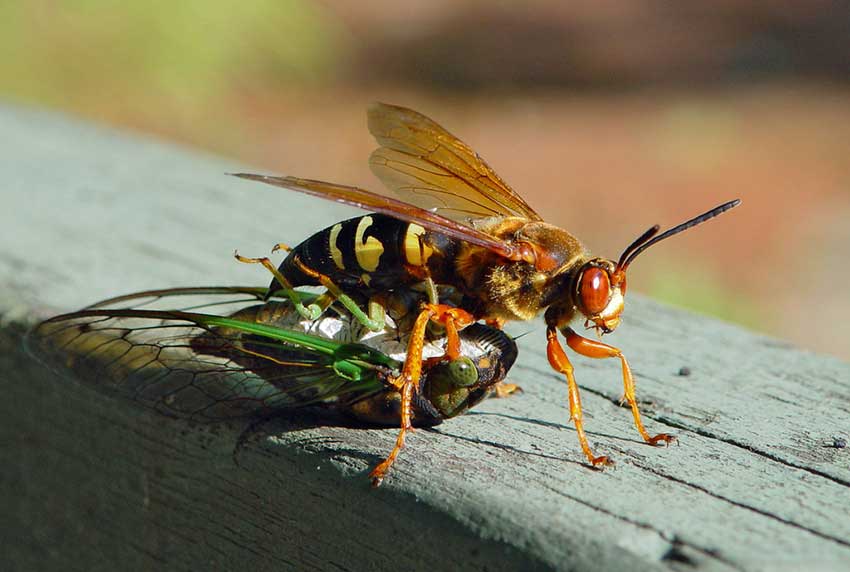 Photo by Steve Krichten
A cicada killer wasp with its locust victim.

These wasps get their name from the fact that they attack cicadas – those thumb-sized brownish insects with bulging bug-eyes sometimes called locusts, whose piercing screech often shatters the silence of late summer afternoons.

Patrolling cicada killers zero in on a target locust, sting it into insensibility – or at least controllability – and head for home. I once observed a cicada killer attack a singing locust, and the buzzing song suddenly took on sort of an “Aaaaaaa! You got me!” screech as the two tumbled to the ground. If the wasp is well up in a tree when the capture occurs, it will buzz and glide its way as close to their nest as possible and then drag the locust the rest of the way. Cicadas are sometimes too heavy for the killer to fly with. Then the wasp has to drag it on foot most of the way to their burrow. Tough way to make a living.

Cicada killers live alone like mud daubers and potter wasps rather than in large groups like yellowjackets, hornets, and red wasps. The adults live on plant nectar and only the females can sting. Making underground nests in lawns, flower beds, gardens, and even the sand traps of golf courses, they leave a 6 to 8-inch U-shaped rim of excavated dirt around the entrance. Each tunnel is about the diameter of a quarter and may be up to two feet deep with 10-20 cells awaiting cicadas. Adults emerge in July and August and the females begin cicada hunting in earnest. Like the Grinch, they take their loot, in this case a cicada, and “stuff it up” (actually down) their nest and lay a single egg on it. 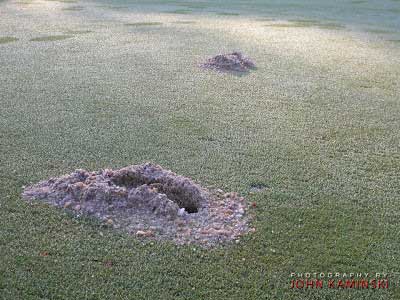 Photo by John Kaminski
Cicada killer wasp nests are quite distinctive and easy to recognize.

The cicada isn’t dead, only tranquilized and paralyzed, and when the wasp egg hatches a couple of days after laying, a voracious larva emerges that burrows around through the still-living body of the cicada, using it for food as it develops to maturity. Sounds like a horror movie, doesn’t it? A nest may contain several cells each containing one to three sleeping cicada dinners. Within two weeks, the larva finishes its supper and gets set for winter. After completing their final development, the new crop of adult wasps come out during the first week or so of July and hum off to start the cicada hunting cycle all over again.

Generally, these spectacular wasps are gone by the second or third week in August, and they only produce a single generation each year. Even though they aren’t usually a problem to people, occasionally, there are so many of them zooming around that the yard may become too fearsome to use. William F. Lyon in an Ohio State University Extension Fact Sheet stated that one woman and her husband killed over 50 of the wasps with a tennis racket. Lyon goes on to say that males – remember they can’t sting – have been known to defend their territory by dive-bombing people’s heads and shoulders in scary but harmless attacks.

If you get over-run this summer with cicada killers, there are a number of insecticides that can be effective. But why bother? They are usually just another non-threatening, interesting part of our amazing natural world. Don’t over-react.