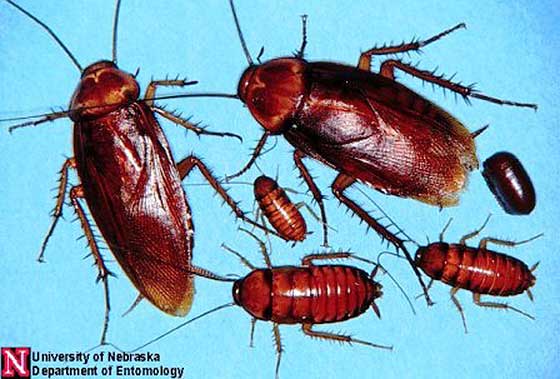 The other day a two-inch long cockroach with even longer antennae zipped across our patio. Here in Texas, they are often called “water bugs.” Most East Texas roaches are the smaller German variety, about a half-inch in length, although American cockroaches can attain a tail-to-nose measurement of an inch and a half.

The critter on my patio was a wood cockroach, La Cucaracha Grande. Wood roaches occasionally get into houses, but that’s ordinarily a mistake on their part. They prefer to live in the woods where microorganisms in their gut (yes, gut is a proper entomological term!) allow them to dine on rotten logs and other woody materials.

About 50 different kinds of roaches have been identified in the U.S., and worldwide there are some 5,000 different species. The most common roaches in our country are the German, American, Oriental, and Brown-banded.

Think two-inch wood roaches are large? Some tropical roaches grow to be 6 inches long, with a wingspread of almost a foot! How’d you like to have one of those land on your shoulder?

Roaches often get into your home by hitchhiking in the corrugations of cardboard boxes or items brought in from the garage. They prefer dark places, are normally active after the sun goes down, and reproduce the same as any other insect – a fact of which I had trouble convincing one of my adult students. He told me in all seriousness that roaches come from stale food. “Oh yeah,” he went on, “Just leave a few crumbs around in the kitchen. Turn off the light and go watch some TV. When you come back, there’ll be a roach sittin’ where every crumb was!” Even showing him a terrarium where cockroaches were being raised didn’t convince him. I pointed out the adults, egg cases, and young. “Well,” he said, “them roaches might reproduce, but mine don’t.”

In general, roaches eat almost anything that’s around, including meat, dog food, leaves, grease, bread, paper, the glue in book bindings, fabrics, dead animals, and on and on. Usually, a roach will only eat another of its kind after it’s dead. But, give them a few bad months of famine and they’ll kill and eat their own. Roaches don’t require much food. A healthy one can get along for 6 weeks or longer without a meal.

Roach infested homes often have a kind of musty odor that most people find unpleasant, and is the result of chemicals on their body surface, regurgitated food, and fecal material. Lovely huh? By the way, that Eau de Roach is, for some people, a powerful allergen, causing asthma-like symptoms and rashes, although tiny bits of roach body parts and fecal material may also be involved.

Not known for being particular in their personal hygiene, roaches wander around in many places that are laced with disease organisms. So, their feet can carry many pathogens as they wander around your counter tops and over exposed food.

One of the most successful animals on the earth, roach fossils show they lived as far back as 350 million years ago. Ancient people probably ate them. They’re higher in protein than chicken, and many people in the world still eat them today. By the way, they taste like shrimp, not chicken. But cook them first to kill disease organisms. Any takers out there? Probably not. But in survival courses I taught for many years, our diet was often a bit exotic.

Roaches are often very hard to control. They become resistant to insecticides. Using sealed containers, not allowing food or crumbs to remain overnight, and keeping trash in closed containers will help decrease the population of any roaches attempting to cohabit your home. Many people have had success killing them by making little balls of a paste of equal parts sugar and borax. Let the balls dry and scatter them around the house where roaches are seen. The sugar will attract them and the borax will kill them.