A roach went by the other day. Or more accurately, it zipped by – or so it seemed. Roaches only have a top speed of about 3 miles per hour, so they’ll never run in the Indy 500 unless they’re in the concession stands. This particular critter was, as Olive Oyl said in the movie Popeye, laaarrge! Most roaches commonly infesting homes are the fairly small German variety, about a half-inch in length, although American cockroaches can attain a tail-to-nose measurement of an inch and a half. This baby was at least 2 inches long with even longer filamentous antennae waving around. It was what Texans often call a “water bug.” But don’t kid yourself; it was a full-fledged cockroach.

What I was looking at was a wood cockroach, La Cucaracha grande, and the king of the field dwellers among his relatives. He was obviously well fed, shiny, bright-eyed and perky. No straggling beggar was he. Scuttling off the patio, he quickly disappeared. 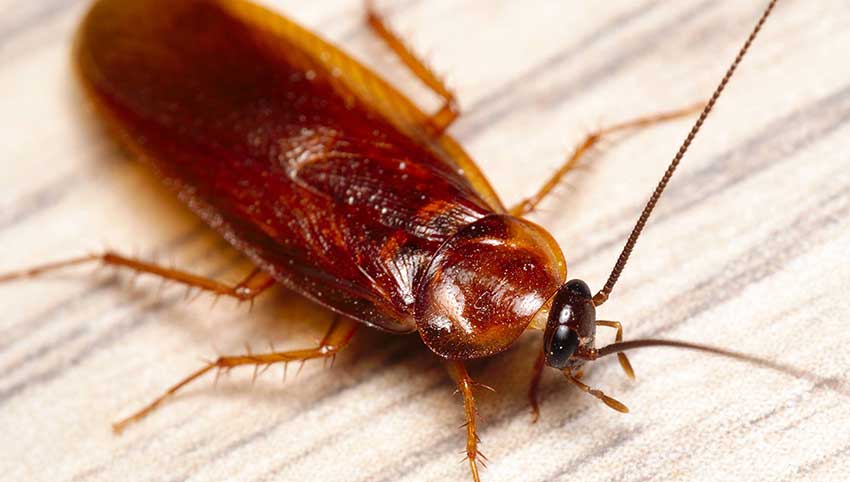 Photo courtesy of www.fightbugs.com
Wood roaches do get into homes occasionally, and will certainly get your attention because of their size.

Wood roaches occasionally get into houses, but that’s ordinarily a mistake on their part. They prefer to live in the woods where microorganisms in their gut (yes, gut is a proper entomological term!) allow them to dine on rotten logs and other wood. The micro-critters inside them enable them to digest cellulose, something that cows do all the time, but people aren’t able to handle.

Four kinds of roaches commonly live in many the United States: German, American, Oriental, and Brown-banded. But, around 50 different kinds have been identified in our country, and worldwide there are some 5,000 different roach species. Some tropical roaches grow to be 6 inches long, with a wingspread of almost a foot!

Roaches often get into your home by hitchhiking in the corrugations of cardboard boxes or items brought in from the garage. They prefer dark places, are normally active after the sun goes down, and reproduce the same as any other insect – a fact of which I had trouble convincing one of my adult students. An older man, raised largely on folklore, he told me in all seriousness that roaches come from stale food. “Wrong!” I said. “Oh yeah,” he went on. “Just leave a few crumbs around in the kitchen. Turn off the light and go watch some TV. When y’all come back, there’ll be a roach settin’ whur ever crumb wuz!” He followed up with, “and they weren’t no roaches there when you done went out.” Showing him a terrarium where cockroaches were being raised, I pointed out the adults, egg cases, and young. His response was, “well them roaches might reproduce, but mine don’t.” That’s a pretty good conclusion even for a scientist since we aren’t supposed to generalize from a single experiment. If more time had been available, I could have raised some of “his” roaches in the lab, but he’d likely just say they acted different away from his house!

In general, roaches eat almost anything that’s around, including meat, dog food, leaves, grease, bread, paper, the glue in book bindings, fabrics, dead animals, and on and on. Usually, a roach, perhaps out of respect, will only eat another of its kind after it’s dead. But, give them a bad few months of famine and they’ll kill and eat their own alive. They don’t have to eat much at any given time, and a healthy roach can get along for 6 weeks or longer without a meal.

One of the most successful animals on the earth, roach fossil remains show they lived as far back as 350 million years ago. They’ve probably been around in an unbroken genealogy from that far back right up to the present. Cavemakers (that’s a prehistoric homemaker) probably had them running around their kitchens. The main difference from us is that they probably ate them. They’re higher in protein than chicken and many people of the world eat them today. By the way, they taste like shrimp, not chicken. But cook them first, they can carry a multitude of serious diseases. Interestingly, the diet of red-cockaded woodpeckers may be 25-80% cockroaches, but many other animals eat them too, including snakes, lizards, other birds, spiders, and of course, other roaches.

Roaches are repulsive to most people, but not to other roaches. It’s all a matter of upbringing and environment. Female roaches release the insect version of perfume - a chemical pheromone - into the air that is like a giant sexual magnet to males. As it wafts about on the breezes, their prospective suitors simply follow the aroma to find Mama. The odor of roaches is often clearly identifiable to people too in places where they live in large numbers. It’s a kind of musty fragrance that most people find unpleasant, and is the result of chemicals on their body surface, regurgitated food, and fecal material. Lovely huh? That Eau de Roach is, for some people, a powerful allergen, causing asthma-like symptoms and rashes, although tiny bits of roach body parts and fecal material may also be involved.

Not known for care in their personal hygiene, roaches wander around in many places that are laced with disease organisms. So, their feet can carry pathogens as they wander around your counter tops and over exposed food. Although they have never been clearly implicated in major disease outbreaks, the list of disease organisms they can carry includes food poisoning bacteria, including Streptococcus, coliform, Salmonella, Staphylococcus, and Clostridium. According to a number of experts, they may also carry germs causing abscesses, boils, plague, gastrointestinal upsets and more.

By limiting their access to your food by using sealed containers and not allowing food or crumbs to remain overnight, not allowing pet food to remain in their dish, and keeping trash in closed containers, you can decrease the population of any roaches attempting to cohabit your home. But if you want to run an interesting experiment, these little denizens of the dark woods are easily raised. Put a few in a terrarium with Vaseline smeared around the inside upper lip to keep them contained, and feed them moistened kibbled dog food. They’ll grow fat and prosperous and you may be fascinated by all their antics. Or – maybe not!