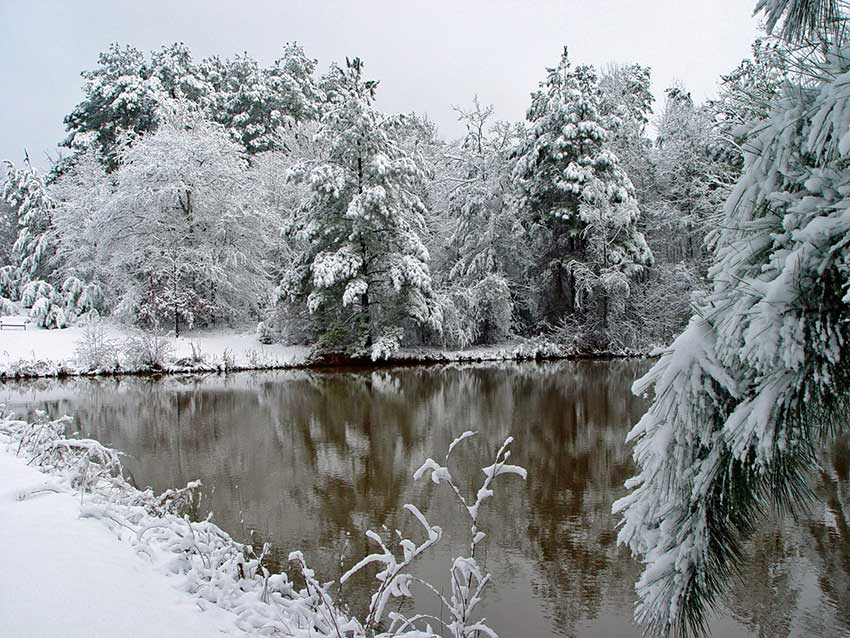 Photo by Paul H. Risk
Although it’s rare, we do sometimes get real winter weather here in East Texas, but only briefly. This is our pond in Nacogdoches, February 2010, when we received 4-6 inches of snow.

Over the last few days, it’s been downright brisk outside. Ever wonder how cold weather affects animals that live without heat pumps and furnaces? Many mammals put on a sweater by growing a thick undercoat of fine, insulating fur. Birds grow fluffy down feathers. Also, when it’s cold, tiny muscles at the base of those feathers or fur contract, fluffing them up for more insulation. Cats just come indoors fluffed to twice their normal size.

We, too, try to raise nonexistent fur during chilly weather. Goose pimples are little lumps on our skin formed when almost microscopic muscles attached to our hairs contract. We’re just not furry enough to have that help much.

Animals are either cold or warm-blooded. Humans are warm-blooded. We “burn” food and feel warm to the touch (except when my wife puts her icy feet on me at night). During cold weather our body temperatures are warmer than the air temperature. At our core, we normally register a toasty 99 degrees Fahrenheit or slightly more. Dogs have a normal temperature of 101-102.

Birds burn food so fast that on very cold nights, they’d run out of energy and die before morning if they couldn’t slow their metabolism. In the case of chickadees, their body temperature drops from 104 to 86 degrees on extremely cold nights, allowing them to survive until breakfast. Then their temperature returns to normal and they spend the day stuffing in enough food to stay alive one more night.

Cold-blooded animals like snakes, frogs, toads, insects, spiders, and all their relatives are another matter. Their internal furnaces don’t generate enough heat to keep them warm. As the weather becomes colder, their body temperatures fall. They become more and more lethargic as the chemical reactions that permit their nerves to transmit and muscles to contract grind slowly almost to a halt. Finding sunny spots in which to bask, burrowing into soil and mud, slithering into sheltered hollows in exposed roots of trees, sliding under bark and into crevices in trees and rocks, helps them cope.

Some insects and fish actually use antifreeze in the winter! Spruce budworms and mealworms, for example, produce proteins that lower the freezing point of their body fluids by as much as 10 degrees. To prevent ice crystals from forming in their bodies, a few insects produce glycerol (glycerin) for up to 25% of their body weight, or ethylene glycol, the same chemical we use as antifreeze in car radiators.

Animals such as toads, frogs, ground squirrels, groundhogs, and mice hibernate when winter comes. Before cold weather arrives, they stuff themselves with food to get as fat as possible. Some find a sheltered place to hole up. Their body temperature falls as much as 30-35 degrees, breathing drops from 200 a minute to 4 or 5, and their pulse plummets from 150 beats a minute to a mere 5.

Bears, by the way, don’t really hibernate. They build up as much fat as possible before cold weather comes, seek out a den in which to spend most of the winter, and go to sleep. But their body temperature only drops a few degrees. Their metabolism falls nearly by half, so their food needs are greatly reduced. They are not completely dormant however, and if disturbed, will awaken. Some Native Americans once hunted sleeping bears in their dens during the winter. A “bear talker” would crawl into the den and whisper a sacred prayer of thanksgiving into the bear’s ear before they killed it. Unfortunately, a bear would sometimes wake up when they heard the part about “we’re now going to kill you” and suddenly become understandably and dangerously violent and uncooperative.

Most of us will simply throw on another blanket at night, don a warmer coat, or turn up the thermostat. We seldom see really cold weather here in the fields and forests of East Texas, and snow is a rarity. For us, a six-inch snowfall usually means only that there are six inches between snowflakes, and schools immediately close down. It will be at or near freezing the next few nights, so be thankful you’re not out in the cold tonight in just your birthday suit. You’re not fluffy enough.