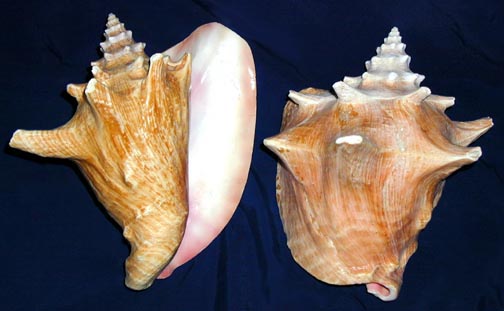 This Queen or Pink Conch is the one we eat.

All day long, warm ocean breezes here in the land of Conchs and coconuts, have sent white-capped turquoise waves rolling toward the beaches of Key West. Smaller islands dot the distant azure blue ocean. Now as the sun sinks into the sea, the horizon and the clouds above it have turned deep orange mixed with luminous liquid gold.

The beautiful chain known as the Florida Keys is comprised of more than 100 islands connected by 42 bridges, and stretches 126 miles south and west from the southern tip of the Florida peninsula into subtropical waters, bounded by Florida Bay and the Gulf of Mexico on the north and northwest, and the Atlantic Ocean on the east and southeast. Animals in hundreds of forms, including manatees, alligators, crocodiles, rattlesnakes, copperheads, water moccasins, and coral snakes live here, along with dolphins, sharks, pelicans, storks, flamingos, roseate spoonbills, mangroves, gumbo limbo trees, palmettos – the list goes on endlessly. Palms in several varieties wave leisurely in the wind. At Key West the highest temperature ever recorded was 97 degrees in the summer of 1880, with the record low of 41 occurring in 1981. The average high in the summer is 89 degrees. While my wife and I visited Key West this week, the water temperature was 72, but it is often in the 80s during the summer. Residents proudly claim that no matter where else you are, the weather is probably better in the Keys.

One variety of Conch (pronounced “konk”) is a large trumpet-shaped snail that can reach a length of 12 inches. Many of us have seen their shells in gift shops. They are white to pink with a large recurved lip. Conchs have two eyes located on extendible stalks, and they drag themselves along the bottom of the ocean by extending a claw-like operculum, or cover, hooking it into the sand and then pulling it back. Conchs are somewhat intelligent plant eaters, traveling in schools and carefully avoiding areas where people have thrown empty conch shells back into the ocean. Living conchs depart the area and will not return. 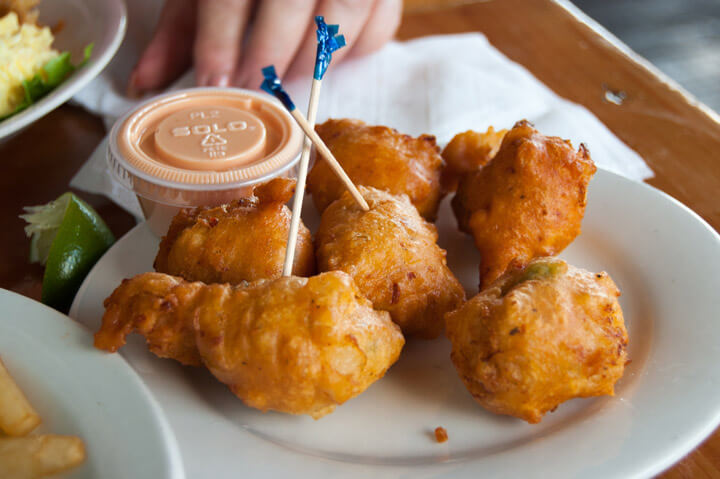 Conch is served as a delicacy in all the seafood restaurants along the Keys - fried, in stews, salads and many other ways. It is sweet, chewy, slightly clam-flavored, delicious, and the second most eaten snail in the world after escargot, and that popularity is their main problem in life. Once numbered in the tens of thousands off the Florida Keys, by the later ‘80s they were severely depleted by commercial harvesting to a population low of about 2200. After 1992, strict controls were put in place, and by 1997 their numbers had increased to 15,000. Today, conchs are protected in U.S. territorial waters, but are harvested under stringent limits and brought in from other locations in the Caribbean.

Snails are not the only Conchs. Key West natives proudly refer to themselves by the same name. Transplants who move there are referred to as “fresh-water Conchs.” This regional pride is so great that on April 23, 1982, the citizens of Key West openly rebelled against a U.S. Government roadblock set up to stop illegal immigrants from entering the mainland, and vociferously seceded from the Union, declaring themselves to be the Conch Republic, which included all the Keys. They marched on the U.S. Naval base at Key West, met the base commander, an admiral, read an official declaration of secession, and then broke a loaf of stale Cuban bread over the head of a man impersonating a uniformed naval officer. After three whole hours of independence, the mayor (then Prime Minister Wardlow) “surrendered” to the Union forces. According to my information, the travel ban was lifted by Presidential Order shortly after the “surrender.” In any case, for the last 22 years, a weeklong Conch Republic Independence Celebration beginning on April 23rd takes place. If you’d like to know more concerning the Conch Republic, go to the Web at conchrepublic.com.

Coconut palms are another interesting component of Florida’s diverse ecosystems. Growing profusely along the edges of the Keys, they may have come from the western Pacific, drifting in on ocean waves. They were probably in the Americas prior to Columbus’ arrival in 1492, and were utilized by native peoples for generations of time. 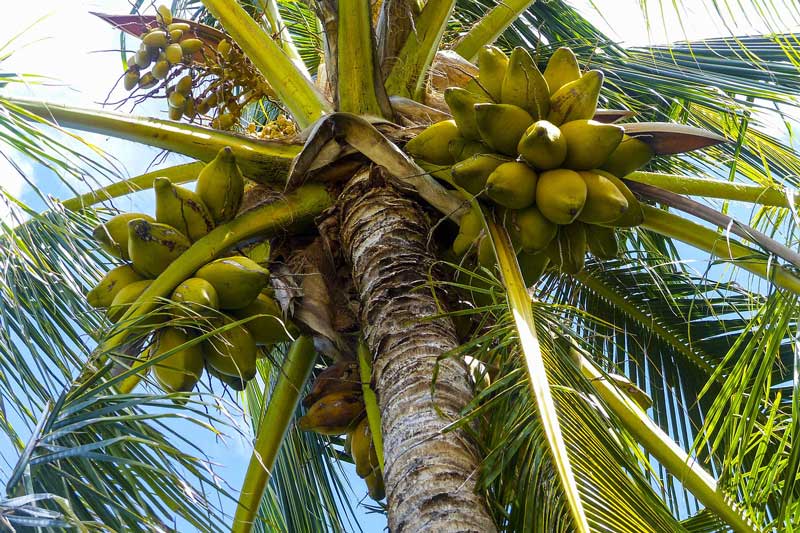 The “nut” we see in markets is just the center of what grows on the trees. It forms in a tough, fibrous, pear-shaped husk, 3-4 inches thick, which is stripped off before they reach our stores. Coconuts can float in ocean water for extended periods of time, perhaps months, without losing their ability to germinate. When they drift ashore in shallow water, they send a sprout through one of their eyes, take root, and grow into the stately trees that form the margins of so many tropical and subtropical islands. Immature coconuts are green, and the husk, as well as the nut within, can easily be cut open. The coconut water inside is sweet with a mild, delicious coconut flavor, and can be a lifesaving source of water in sea survival situations. Conversely, the liquid from mature coconuts, which many of us have tasted, is strongly laxative in large quantities. Luckily, water from the green immature fruit doesn’t have that effect and can be consumed in unlimited quantities. The “meat” of green coconuts is the consistency of somewhat rigid Jell-O, and wonderful tasting. As germination takes place, the interior of the nut becomes filled with a moist, spongy mass of tissue called coconut bread, a highly nutritious and tasty substance. The sprout itself can be peeled and eaten raw.

The white meat of the mature nuts that we’re all familiar with, is tough, chewy, delicious, and available in markets in the shell or shredded. The latter is often sprinkled as a topping or mixed into other foods, not the least of which are coconut macaroons.

Slowly heating coconut meat in water causes the oil or butter to rise to the top where it can be skimmed off, and is useful in treating burns, saltwater sores, dry skin, and for improvised torches. The oil, dripped into a fire, drives away mosquitoes, and the smoldering husks will do the same thing. In the Philippines, a drink called “toddy,” taken fresh or fermented, is made from the sap of the flower clusters. Copra is the dried coconut meat and is the commercial source of coconut oil. The fiber of the husk, known as “Coir,” is used in ropes, mats, brushes, and in calking boats.

So for now, from the land of Conchs and coconuts, I hope you all had a great spring break . . . as we did. By the time you read this, I’ll be back in Nacogdoches – maybe.