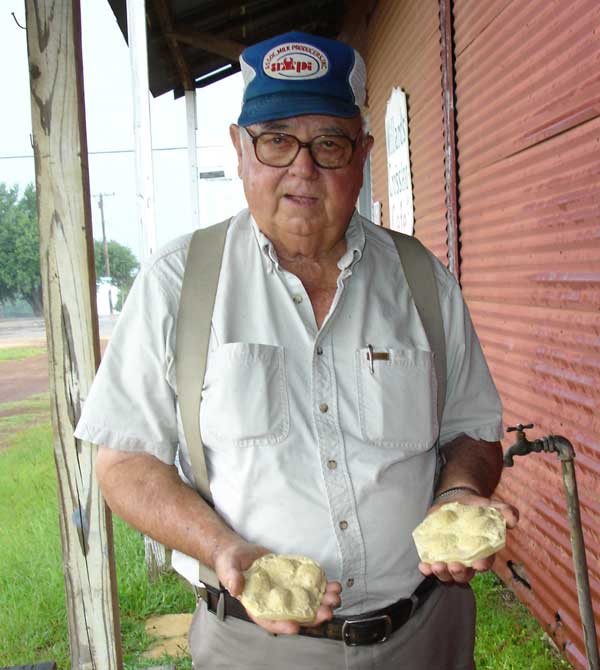 Photo by Paul H. Risk
Rudy Millard holding castings of cougar tracks made by Dr. Ed Klein, a former physician who practiced in Nacogdoches for many years.

“A piercing scream like a woman being murdered,” one witness said to describe a cougar’s blood-curdling yell. “All the dogs around started “barking their heads off” as they “put their tail between their legs and scuttled for cover under anything they could find.” “If you hear one once, you’ll never forget it,” another said, going on to comment that “nothing else in the woods sounds anything like it. Made my hair stand straight up!”

Cougars, also called mountain lions, were once fairly common here in East Texas and many reputable people say they still live around us, furtively slinking through the woods in search of prey.

Usually tawny yellow to grayish with a broad head and penetrating yellow eyes, cougars are often 4-4 ½ feet long with a 3-foot long tail that’s dark brown at the tip. Their eyes shine greenish-gold in a spotlight beam. Males weight from 100 to 150 pounds or more. Although rare, black cougars have also been seen.

Rudy Millard, a long-time resident of Nacogdoches said cougar tracks were common in his pastures and swamp land along and just north of Old Post Oak Road, particularly along the Lanana Creek drainage. “We saw them all the time,” he commented to me. “But, I haven’t seen any for the last 6 or 7 years.”

Millard described an experience in about 1982 of finding one of his calves mauled and partially eaten by a cougar.

“The back of the neck was torn up and a pretty big chunk of meat was taken from the body. My dog smelled around, came back and hid under the truck.”

Fresh cougar tracks were “all around the dead calf. And I felt the cat was probably right out there watching us.”

Later Rudy and Dr. Ed Klein, a local physician, went back out to the scene. Rudy said “Dr. Klein went over to the hospital and got some plaster of Paris to make casts of the tracks. He came back that evening in his Jeep after the plaster had hardened.” Since he’d come directly from work, he was wearing a suit and dress shoes. Just as he was getting the last castings, a sudden gust of wind blew the Jeep door shut with a bang. Klein told Rudy he’d been wondering where the cougar was and when that door slammed. He “took off across that swamp” and “didn’t get a drop of mud on his shoes” running back to the Jeep. 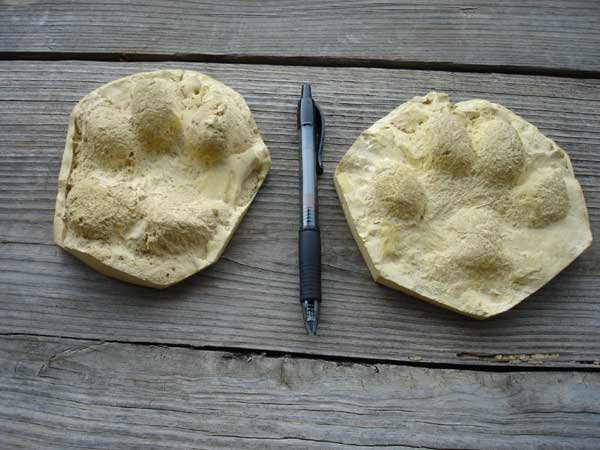 Photo by Paul H. Risk
The cougar tracks were found about 1982 near Old Post Oak Road at the northern edge of Nacogdoches on Rudy Millard’s property. For scale, the ballpoint pen is 5 ½ inches long.

Two or three years later Rudy and one of his hired men were driving through a pasture when the man said “there’s a deer.” Rudy looked over and realized they were seeing a big cougar walking up the hill. “That’s not a deer, Rudy said, “it’s a big cat; look at his long tail.” The cat was in no hurry and just walked along like he owned the area and then disappeared in the brush.

About two years after that, Rudy said “I was driving down by the side of the Lanana Creek and thought I saw something moving. It was another cougar. “This first cat I saw a few years before was a big cat – looked like a male. But, this was a smaller cat and she had two small ones following her.” They trotted off along a trail to the north and Rudy never saw them again.

Cougars feed on deer and smaller animals and don’t generally dine on spoiled meat. Their presence is actually good for a deer herd since they stalk, kill and eat the weaker animals.

According to Texas Parks and Wildlife biologists, cougar numbers may be slowly increasing. However, they are generally nocturnal and very secretive, although several people have told me they have recently seen them in various parts of Nacogdoches County.

Cougars are unlikely to attack humans, but it has happened. If you see one, the same rules apply as for strange dogs. Maintain eye contact and back slowly away, but don’t run. The Texas Parks and Wildlife Department recommends not hiking alone in areas where mountain lions are well established.

To me, cougars are a symbol of the wildness that once was Texas and I look forward to seeing one. If you’re lucky, maybe you will too. And please, if you do, let me know.