Big, black, and highly intelligent, crows are found not only in my backyard but also all over the world. They are known for their tight family relationships, crafty behavior, great eyesight, long life, intelligence, and use of tools. This latter behavior doesn’t mean the employment of socket wrenches and laser levels, but they have been observed peeling and using a barbed twig for spearing insects and their larvae. For many years scientists said that only humans were smart enough to be tool-makers and users. We know now that a number of other animals use tools.

Photo courtesy of texascrowpatrol.com
Crows are famous for their bold behavior. They eat a wide variety of food but they seem to prefer fruits and nuts intended for human consumption.

As anyone who has ever seen one can testify, crows are big – 18 inches tall with a wingspread of 3 feet – and strong. Their large beak enables them to tear into most things, even nuts. They seem to have a particular fondness for peaches and pecans. Last season they decimated our crops, leaving only a few for us. Obviously, they think we planted our trees solely for their benefit. Typical crow attitude!

Crows are omnivores, and like humans, they eat almost anything. Their diet consists of insects and larvae, spiders, crayfish, frogs, mice, young rabbits, fruit, grains and nuts, as well as garbage. Even walnuts are consumed. They hold hard nuts on the ground with one foot and hack at them with their bill. Very hard nuts are sometimes carried high aloft and dropped on concrete pavement to crack them. 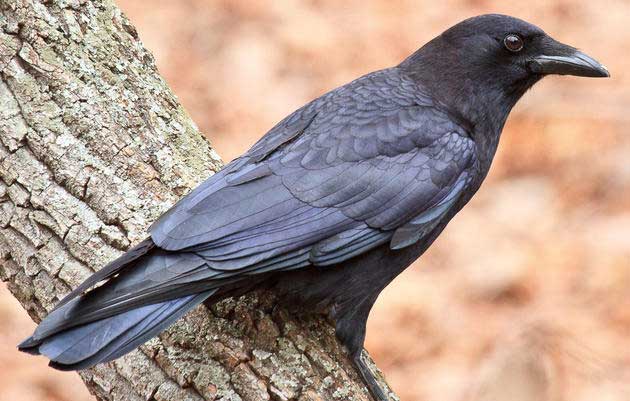 Extended crow families stay together in flocks that sometimes number in the hundreds, although it is more common to see much smaller groups. Crows can live 10 years or longer. A congregation of crows is called a “murder,” although I’ve never been around anyone who called groups of crows anything but a flock. Ever heard someone in East Texas say “Ah’ve had this here big murder of crows jist cleanin’ out mah peecahns this year?” Didn’t think so. But I have heard “Ah’d like to murder those dang crows that’s eatin’ our peecahns.”

To drive away predators like owls, crows get together and the whole bunch of them go after the interloper. That behavior is called “mobbing” as in: “saw a whole murder of crows mobbin’ a big ole owl th’other day.” Crows just flat don’t like owls and go about half nuts when they spot one, since owls feed on crows when they get a chance.

Crows use a wide variety of calls, although we commonly think they only say “Caw! Caw! Caw!” Actually, they carry on extensive conversations that communicate their location, the presence of danger, gathering and navigation signals, and many other things. Loud caws and their variations are what we most often hear, but crows have a very wide vocabulary, some of which consists of many much softer and more complicated sounds.

In the field it is almost impossible to tell the difference between male and female crows, although it is apparent from their abundance that they have no trouble solving that puzzle. Males pursue prospective mates in flight and on the ground, they strut around in front of the female, spreading their wings and tail, fluffing out their feathers, and bowing.

Nests are made of small branches and twigs, and lined with grass, leaves, hair, or feathers placed in trees 70-100 feet off the ground. Eggs hatch in about 18 days, and newly hatched crows are featherless and helpless, depending entirely on their parents to stay alive. The young crows leave the nest after approximately a month.

Myths about crows abound, but many are confused with raven tales. Although related to crows, ravens are much larger – 24 inches tall with a 4-foot wingspread. They are not found in East Texas. An ancient crow tale from the Inuit is that Crow was talked into flying south to get daylight to illuminate the dark far north. He did so, but could only get a single ball of sunlight. So, the arctic areas only have daylight during six months of the year.

Some people believe that crows in a churchyard are a bad omen, and hearing crows cawing around your house means there will soon be a death in the family. Finding a dead crow on the road is supposedly good luck. I don’t know why, but it certainly wasn’t lucky for the crow. Nevertheless, I’ll wish for you only dead crows along your road and not live ones in your fruit and nut trees.