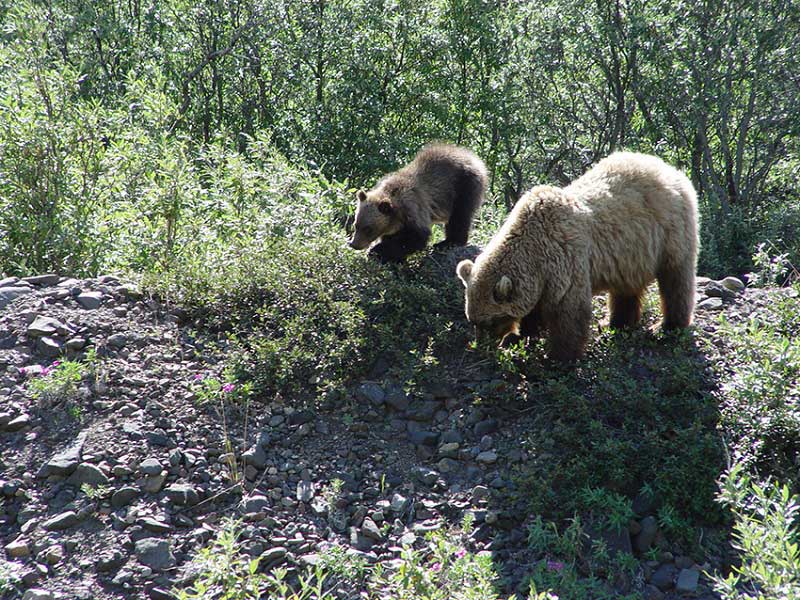 Photo by Paul H. Risk
A momma grizzly bear with a cub – the worst of all dangerous situations. Adult grizzlies can outrun a horse.

On July 3rd a 28-year-old man at a marina in Orange County Texas was attacked and killed by an alligator. Signs stating “No Swimming – Alligators” were posted, and he was verbally warned as well. According to Orange County officials, the victim took out his wallet, removed his shirt, said “[blank] the alligators,” and jumped into the water. He was almost immediately attacked, yelled for help, was pulled under twice, and disappeared. His body was recovered several hours later.

Over the past two months, 4 visitors at Yellowstone National Park were attacked by bison. Two of the victims were hospitalized with serious injuries.

Also at Yellowstone National Park, a visitor stalked too close to a moose in an attempt to get a picture. The moose finally lost its sense of humor, gored him, and tossed him into the air. Rapidly losing blood from a lacerated artery in his leg, he was rushed to the hospital where he narrowly escaped death.

Some years ago a family visiting a western wildlife preserve, approached a bison lying down near the fence. Ignoring signs warning visitors to stay outside the enclosure, the husband crawled through the fence and kicked a bison in the side to get it to stand up. It charged the man and killed him. Should that be a surprise?

Within the past month, a tourist at a wildlife park in South Africa was taking pictures of lions with her car window rolled down – a violation of park safety rules. One of the lions lunged through the window and inflicted fatal injuries on the woman. In another park, a leopard attacked and injured a guide.

For years park visitors at Yellowstone and other national parks have persisted in feeding bears. They’re not Teddy Bears! One woman gave her small daughter a peanut butter sandwich and encouraged her to offer it to a bruin. The animal clawed the girl from her elbow to her fingers, opening the flesh to the bone.

In another case, a bear was coaxed into a visitor’s car so a picture could be taken of the animal behind the wheel. When asked to leave, it became upset. It was finally evicted, but not before thoroughly destroying the vehicle’s interior.

“Swim With Dolphins” programs are increasingly popular at marine nature centers. Visitors enter the water with the dolphins where they touch, stroke, and feed them. The idea seems to be that dolphins are benign, cuddly creatures that would never hurt a fly, let alone a person. After all, they talk! Usually, these experiences are harmless, and the visitors go away with memories of an unusual, pleasant, and exciting experience.

Human injuries from dolphins are rare. However, there have been instances in which dolphins have butted swimmers, shattering facemasks, and even breaking limbs and ribs. Dolphins are very powerful and have been known to kill sharks by ramming them.

Nature centers and zoos offer visitors petting enclosures, tide pool tanks, and terrariums where visitors have the opportunity to touch and handle a wide variety of wildlife and farm animals. Why do some folks think it’s so important to touch wild creatures?

In cities, people often put out food for raccoons and coyotes in an effort to develop a special relationship with them. As a result, raccoons with an attitude sometimes bite the hands that feed them. Coyotes and cougars in California have attacked small children and joggers.

Whether we like it or not, wild animals, whether aquatic, marine, or terrestrial are – wild! What a surprise! Modern civilization is distorting our reality of the outdoors. People are completely out of touch with the meaning of the word “wild,” meaning “uncontrolled,” and includes “wilderness” or a place where wild animals dwell.

As people have become more urbanized and less knowledgeable about the outdoors, an unrealistic separation from the outdoors has taken place. A “Bambi, Beauty, and Bounteous Love” mentality has permeated the fields, forests, and oceans. Well, I’m here to tell you. It just ain’t so.

In spite of what fairy tales lead us to believe, wild creatures do not reason at the same level as humans. Rather than kind and gentle, many of them are very dangerous and unpredictable. Don’t expect human reactions from them. An encounter with them may be memorable, but very damaging. And terminal.