Recently the telephone company had to run a new cable across our backyard. To do this required driving a large trenching/cable laying machine across the yard, avoiding damage to any buried water or power lines. The machine had a spool of cable on the front, a blade that cut the trench and another that covered the new cable. Pretty slick. My main concern was avoiding the buried power feed line that runs underground from the pole with our transformer to the house. The plot thickens. 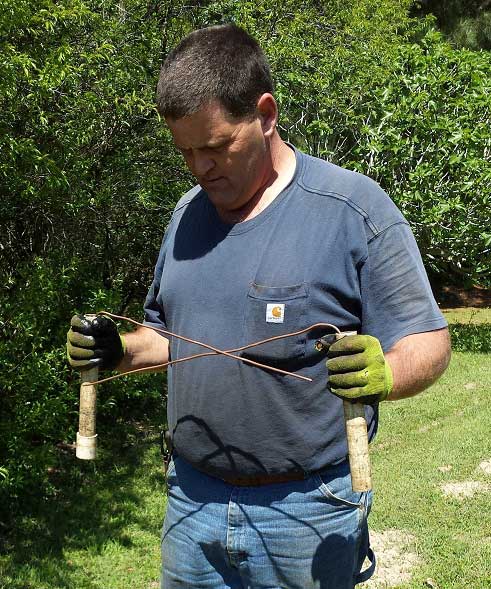 Photo by Paul H. Risk
Patrick O’Neal, an AT&T cable man with his two dowsing rods crossing right over the location of our buried power line, a detection technique he uses all the time.

Patrick O’Neal, the AT&T cable man, brought out a pair of L-shaped copper rods and two short PVC pipes. About 14 inches long by 6 inches, the short arm of each wire L was placed in the PVC pipe, with one held in each hand. Standing in the yard away from pipes, power lines, etc., the two rods pointed straight ahead parallel with each other. Then the magic began. As he moved toward the buried power line, the two metal rods began to gradually point toward each other until standing over the line they crossed. Amazing. Modern day dowsing. The crossing point was about two feet from where I thought the power line was buried. They were right and I was wrong.

Dowsing has been practiced since ancient times. Often a forked hazel, witch hazel, peach or other branch was used and some dowsers still prefer this method. The dowser holds the ends of the forked stick in each hand with the point straight ahead. When they approach the target the stick dips or vibrates. There are other methods that have been used including a crystal suspended on a string, but you get the idea. Supporters say something unexplainable causes the deviation of the detector. Gravitational flux lines? Electrical flow in the dowser’s body? Unconscious control by the operator? Who knows? Studies have been done that largely indicate that dowsing is only as good as flipping a coin. But supporters are numerous.

This past year while living in Nauvoo, Illinois, my wife and I went on a historical tour along the route of the Mormon exodus from Nauvoo to Utah that took place during the mid-1800s. We visited several sites where wagon roads, encampments, and graves had been located. Our guide, using – yep, you guessed it – dowsing rods, showed that they responded when crossing the old invisible roads and over grave sites. He then gave each of us (there were about 14 of us in the group) a pair of the L-shaped wire rods to try. They appeared to be made from coat hanger wire. We held one of the rods in each hand by its short arm with the long axis pointing forward. Sure enough, as we approached the target locations, the rods moved toward each other and then back apart as we passed over the buried sites. I know, I know, it’s nuts. But, I can only report what I saw and experienced. I have seen other dowsers use the same technique for locating buried water lines.

Dowsing has been used to determine where to drill water wells, and those who use the technique swear to their success. Others have used the procedure to locate mineral deposits and even lost objects.

A number of experiments testing whether dowsing really is reliable have been performed. Some extensive procedures were used in Germany but so far the studies have shown that success is only random and occur only by chance. Still, I’ve watched, tried it myself, and it seems to work.

Now, supporters can sagely nod and say you knew it all along. Doubters can laugh like crazy at that nutty Dr. Risk. But, as William Shakespeare wrote in Hamlet, “There are more things in Heaven and Earth, Horatio, than are dreamt of in your philosophy.”

All I can say is, the more I think I know about how things work in the world, the more humbled I am by how little I really understand. How about you?