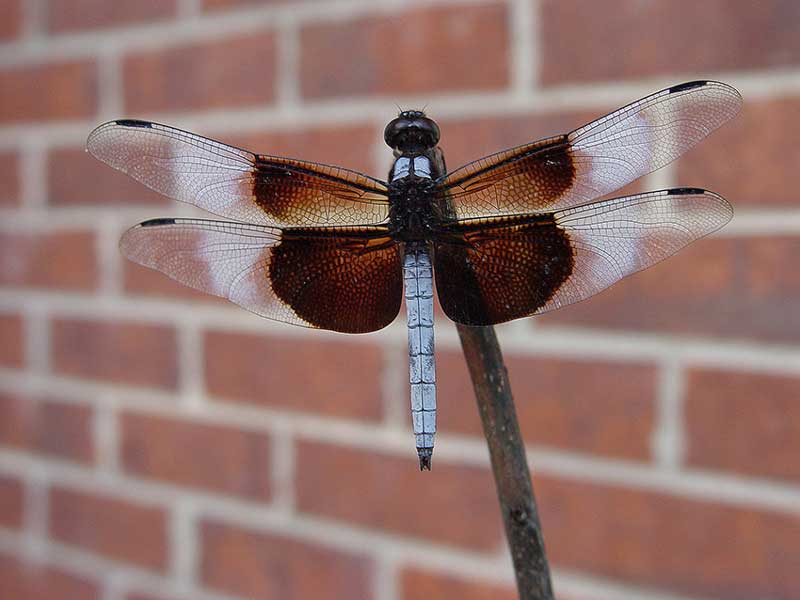 Photo by Paul H. Risk
A white-tailed skimmer perches on a patio twig waiting for a passing meal.

Drifting along on the evening breezes, seemingly without a single wing beat, dragonflies seem to be everywhere now. Going by the moniker of “devil's darning needle,” “snake doctor,” or “snake feeder,” these harmless-to-humans insects soar around ponds, perch on the tips of fishing rods, hover motionless on tiny thermals, and glide effortlessly in small search-and-destroy squadrons across the lawn. However, they aren't just touring for pleasure. These flights of dragons are for the sole purpose of getting a meal. But contrary to their folk names, they don’t darn socks, even for the Devil, aren’t responsible for treating sick snakes and don’t provide food for them either.

Dragonflies have been around for 300 million years and are one of the first winged insects ever found as fossils. Present day dragonflies have wingspans of only two to six inches, but those from the geologic past had wings three feet across! Imagine a critter that size settling gently down on your head for a look around.

Called Odonata by entomologists, meaning “the toothed one" or “toothed jaw,” dragonflies have long played an important part in myth and religion. Children were once warned that if they talked too much those flying darning needles would sew their lips shut! Nice stuff huh? And we think media plots are too violent today!

Some Native Americans view the dragonfly as a symbol of the whirlwind, and in ancient Japan, they were considered sacred. Known as katsumushi – the invincible insect – they were a favorite symbol of strength among Japanese warriors, sometimes painted in red, black, and gold on their helmets.

Dragonflies are flight specialists. Their four wings are independently controllable, enabling them to do aerobatics that put modern pilots to shame. They can fly up to sixty miles per hour, hover, fly backward, zoom straight up, stall, spin, and sideslip. However, all this action isn't without cost. It takes a lot of energy. They burn up to fifty times as much energy in flight as at rest. Like an airplane, they use less fuel cruising or gliding. So, active flight translates into the need for a lot of mosquito munching.

Anyone who has watched a dragonfly knows that they can turn their head in all directions. Their two huge hemispherical eyes each have about 30,000 individual facets or lenses and are especially well suited for seeing and tracking movement. During their short two to three weeks of life as adults, they eat not only mosquitoes but also midges, moths, bees, butterflies, and even other dragonflies. In short, they are terrors of the skies. 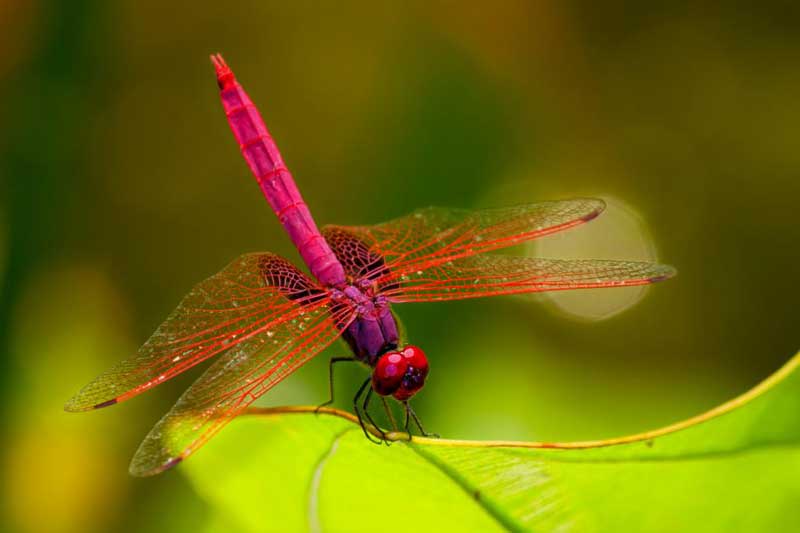 Over 450 kinds of dragonflies live in North America, and 5,000 to 10,000 are found worldwide. During reproduction, they lay hundreds of eggs by dropping them directly in water, mud, or by or inserting them in a slit in the stem of a submerged plant. The eggs hatch into a voracious, water-dwelling nymph that goes through as many as twelve molts, shedding its skin and growing larger over a period of two to three years. With an ugly, under-slung, extendable jaw set with needle-like teeth, large nymphs can successfully attack and eat many forms of aquatic life, including small minnows and tadpoles. By the end of their sojourn as a water creature, the nymph – now called a naiad – crawls out of the pond, splits along the middle of its back, and an adult dragonfly emerges, pausing for a time as its wings dry, and then soaring off in search of a meal.

As summer draws to a close and fall approaches, dragonfly numbers diminish, and around the end of October they will all be gone, to be replaced next spring by a newly minted crop of adults.

Dragonflies are a beneficial and beautiful part of our environment, eating many noxious or harmful insects, so I always enjoy having them around. Of course, whether they are helpful or not is beside the point; they are here and are an important part of nature's complex web, another fascinating part of our fields and forests. Enjoy them.