Are there alligators in East Texas? Absolutely. Our next-door neighbor recently found a six-foot alligator on our road (Old Post Oak) near where Lanana Creek crosses. In fact, the eastern third of the state is prime homesteading territory for these toothy reptiles, and over the last month or two, sightings are on the upswing. It has been estimated that there are nearly 500,000 alligators in Texas. 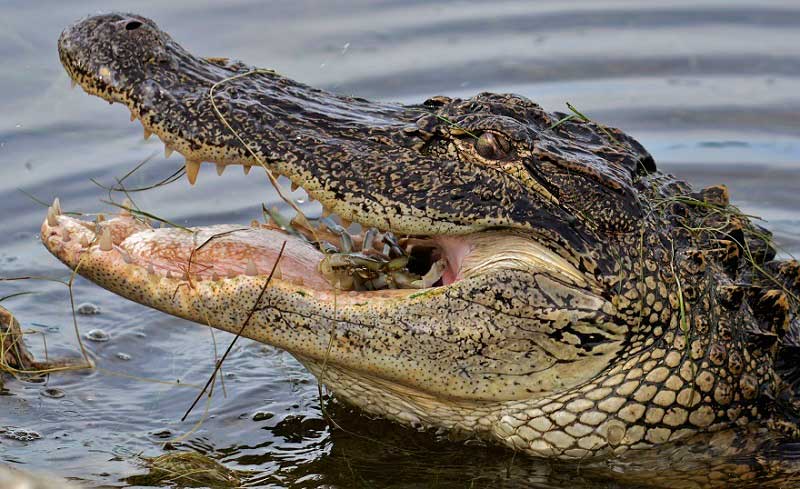 Record-breaking rains causing rivers, streams, and creeks to flood lowlands have broadened their territory. Also, March through May is the peak breeding season for ‘gators. During this time, males swim, slither, crawl, and walk long distances, exploring up to 10 square miles as they seek mates. Females usually stay in a smaller area awaiting their scaly suitors.

Female alligators lay 30-50 eggs in a nest made of grass, mud, and other vegetation. The eggs hatch in about two months. The sex of the hatchlings is determined by the temperature of the nest. According to Gator Facts, a publication from Texas Parks and Wildlife, “The sex of hatchlings is determined by incubation temperatures during the first 10 days of embryo development. Warmer internal nest temperatures (above 89°F) usually produce all males, while cooler temperatures (below 87°F) produce both sexes or all females.”

Newborn alligators eat insects and their larvae, among other things. As they grow, meals include small birds, frogs, crawfish, and snakes. Growing up to a foot each year, their diet soon includes larger animals. Adults eat mammals, frogs, waterfowl, turtles and other animals. Even small deer and domestic dogs have been eaten.

Alligators often lie almost entirely submerged, with only their eyes and their nostrils showing above the water, as they wait for a passing meal. In the Florida Everglades one night I shined a flashlight across one of the swamps, and it looked like it was alive with glowing amber lights on the water surface – the reflecting eyes of a gazillion (there’s a good figure) alligators. If you get bored some evening, you might try that around your nearest pond. Although bullfrog eyes look similar, they’re just smaller.

Normally alligators don’t attack people, but some people feed them – a violation of the law – and they become accustomed to human contact. They may lunge at a person feeding them and grab their arm or hand, causing serious injury.

It is wise to be cautious about swimming in small streams and ponds. A small child might be mistaken for a meal, although there have been no recorded fatal attacks by alligators for more than 150 years in Texas.

Alligators and crocodiles are related, and both have been on the scene for millions of years, but crocs don’t live in Texas, preferring southern Florida and other parts of the world instead. How do you tell the difference between them? When a crocodile’s mouth is closed, its upper and lower teeth overlap and are visible. Only the upper teeth of an alligator show. Crocodiles do attack people, as well as cattle and other animals. Remember the scene from “Crocodile Dundee?” Luckily we only have to worry about ‘gators.

The key is to be cautious around water any time of the year here in the fields and forests of East Texas. I tell you, if it’s not one thing, it’s another, isn’t it? I guess there’s some truth to the statement that in this state if it’s alive it has thorns, stingers, or fangs. So don’t get me started talking about snakes.