No, this isn’t a Dr. Seuss story, but it might be. It’s about crispy critters that crawl, hop, flutter and fly, or chirp and sing at night that you could add to your diet &8211; if you are brave enough. 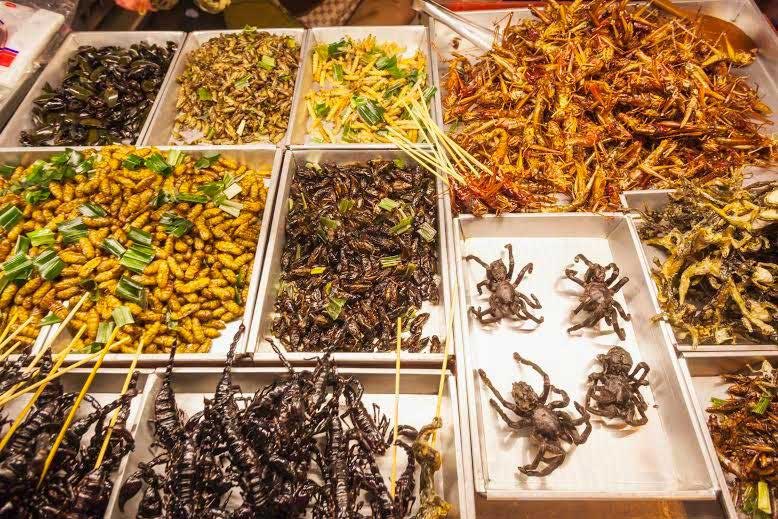 Courtesy of bugsfordinner.com
Scorpions, centipedes and giant spiders await their turn in the deep fryer in an oriental market. Yum!

In the fields and forests, gazillions (that’s a highly technical math term) of birds, mammals, reptiles, and amphibians eat spiders and insects all the time, and thrive on them. Could you and I do it, too? Sure we could. The question isn’t whether we could, but if we would.

In Matthew 3:4 of the Bible we read that John the Baptist “… had his raiment of camel’s hair, and a leathern girdle about his loins; and his meat was locusts and wild honey.” Well, “almost anything tastes better with honey on it,” you might say.

For many years, I taught and wrote about outdoor survival. Of course, the theme was coping with emergencies, but the varmints we ate in the field could just as well have been our daily fare, not just an occasional “I dare you” venture into challenging cuisine during survival field training. Roasted locusts, even without honey, were good eatin’.

Some students were not only adventurous enough to gobble down grubs and other larvae, grasshoppers, crickets, and locusts, they did it without even grimacing. Just cooked ‘em and chucked ‘em into their mouth. Crunch! Crunch! Crunch! Others made faces, squinted their eyes closed, and fought the gag reflex. The interesting thing was that most found the experience was not bad, and the taste surprisingly pleasing. The white grubs in your lawn when roasted or fried taste exactly like fried pork rinds. Note: We always cooked wild things first, to avoid the possibility of pathogenic organisms.

Our biggest problem with entomophagy (the tech term for eating insects) isn’t the taste, it’s the idea. We grow up eating dead cows, pigs, and chickens, but not the things we hire exterminators to spray for. 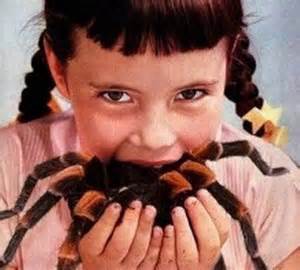 Courtesy of bugsfordinner.com
It has been reported that a third of the world’s population eat insects and/or arachnids (spiders and their relatives) as part of their daily diet.

Is there really nutritional value in chowing down on insects and non-insect arthropods? Absolutely!

In 2013 the Food and Agriculture Organization of the United Nations published a 208-page book entitled “The Edible Insects: Future Prospect for Food and Feed Security.” The authors provide extensive lists of the protein, fat, fiber, and vitamin content of many of these animals. In this same publication data from Rumpold and Schlüter (2013) compiled nutrient compositions for 236 edible insects, saying “…although significant variation was found in the data, many edible insects provide satisfactory amounts of energy and protein, meet amino acid requirements for humans, are high in monounsaturated and/or polyunsaturated fatty acids, and are rich in micronutrients such as copper, iron, magnesium, manganese, phosphorous, selenium, and zinc, as well as riboflavin, pantothenic acid, biotin and, in some cases, folic acid.”

A Web search for “edible insects” yields a number of commercial enterprises in the U.S. that sell edible insects, including cricket flour and cricket energy bars. Numerous sites include recipes for the preparation of insect cuisine.

I do, however, have to admit some prejudice against eating certain kinds of arthropods, alive, dead, or cooked. Scorpions, centipedes, and tarantulas are not high on my list of things to eat. But a friend of mine has a grandson living in China teaching English, and he was kind enough to send me pictures of some critters skewered on sticks, ready to be fried in a large outdoor market in Beijing.

Perhaps I can talk someone at the local farmers market here in Nacogdoches to expand their offerings to include exotic insect foods. Or maybe not. You never know. After all, in Texas, folks have been known to eat some pretty strange things, including alligators, rattlesnakes, armadillos, skunks, fish eggs, and fried pig intestines (chitlins). The fields and forests around here are indeed pretty wild and strange.