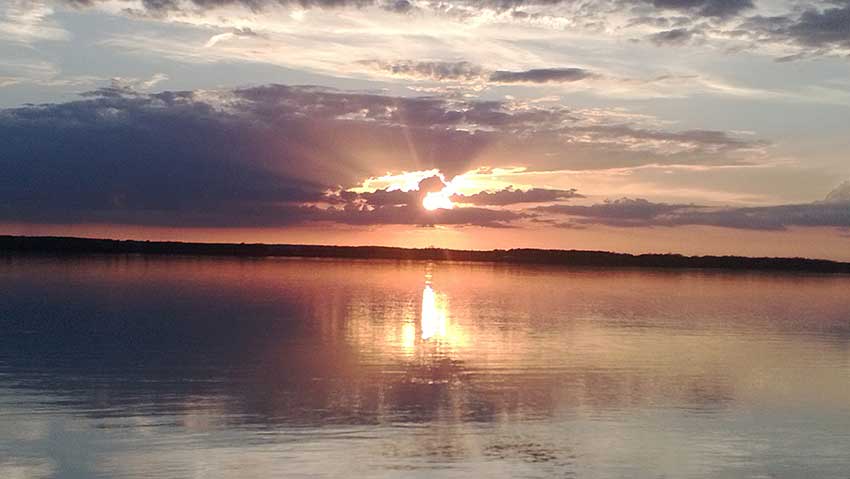 Photo by Paul H. Risk
The sun setting over the Mississippi River at Nauvoo, Illinois, paints a beautiful and colorful landscape of tranquility at day's end.

What? Eat the sun? Sure, we do it every day. Did you eat a salad today? You ate the sun. Eat a hamburger and you’re munching protein from cattle that ate green plants to generate the basic building blocks of that burger. All the energy on earth has its origins in the sun. When we eat, we eat the sun.

Through photosynthesis green plants convert sunlight into food. Light and chlorophyll (the green coloring chemical in plants) combine carbon dioxide and water with mineral nutrients in the soil and create carbohydrates, and produce oxygen.

Our churning, boiling sun is a huge nuclear fusion reactor (like a hydrogen bomb) about 100 times the diameter of the earth. It has a surface temperature of 9,941 degrees Fahrenheit, and is a mind-boggling 27,000,000 degrees at the core.

That heat is critical to keep the earth from becoming a frozen block of rock, and for maintaining proper temperatures for growing our food. First, it’s a long, long way from the earth to the sun - 92.9 million miles. That’s so far it takes over 8 minutes at the speed of light (186,000 miles per second) for sunlight to reach us. And like a monumental rotisserie, we spin on our axis at just the right speed to neither freeze nor fry.

Like Goldilocks’ eating the baby bear’s oatmeal, our temperatures are “just right.” If we stopped spinning, one side of our planet would fry while other froze.

But wait. What about energy from oil and coal? Well, they both are formed from decomposed plants and animals long dead, dating back into geologic time. So we also got them from the sun.

Planets, including Earth, formed from a gigantic dust and gas cloud formed during the creation of the sun. So we’re back to old Sol again as the source of all our energy. In other words, everything we have came from the sun.

However, the sun is a source of mixed blessings. While it may keep us toasty warm, help our body produce vitamin D, and generate beautiful sunsets and northern lights, it also produces x-rays and ultraviolet radiation that can be harmful. Solar flares often reach far out into space and their radiation sometimes interferes with radio communication and electrical transmission, inducing power surges in transmission lines that blow transformers.

Most of us also know that exposure to sun in light-skinned people causes an increase in the production of melanin to darken the skin as our body attempts to prevent damage. That’s what sun tanning is all about. But over-exposure to the sun causes reddening and blistering. Sun exposure ages the skin too, causing us to develop a weather-beaten, wrinkled complexion that makes us look older than we really are.

A variety of sun damage lesions and precancerous growths are produced when we are exposed to continuing high sun exposure. The most dangerous of these are malignant melanomas that often metastasize, spreading throughout the body with deadly results. Moles that change in size and color are suspect and should be examined by a physician.

Efficient sun blocking creams and lotions are highly recommended for anyone working or playing in the sun. Physicians nowadays also warn that tanning studios have the potential of producing dangerous tumors, and recommend strongly that they be avoided.

In a nutshell, the sun is a very pleasant part of our fields and forests, but like so many other things in life, we need to take it in moderation. Don’t overdo it. But enjoy your sun sandwich.