On Monday, the 21st of August, the moon slipped between the sun and the earth, and in many parts of the United States it completely blocked out the sun for a few minutes. The last total solar eclipse visible coast to coast was about 40 years ago. During last month’s eclipse about 80% of the sun was blocked in East Texas. 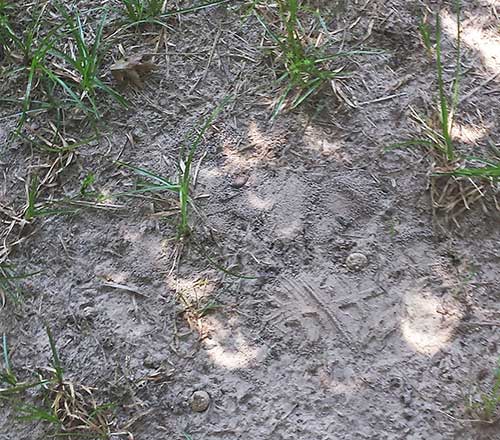 Photo by Paul H. Risk
Eclipse images projected on the ground by the sun shining through gaps in an oak tree's leaves.

In 1951 a movie entitled The Day The Earth Stood Still, starring Michael Rennie as an extraterrestrial humanoid named Klaatu, hit the silver screen. In the movie Klaatu shuts down all electrical power on the earth except for vital places such as hospitals. His aim was to warn us that earth’s tinkering with nuclear war was endangering many civilizations in outer space, and if we didn’t become more civilized “they” were going to reduce earth to a charred, black cinder.

Our experience last month was nothing like that, but it was almost as eerie. It began at 11:45 A.M., reached maximum at 1:16 P.M. and was over by 2:45 P.M. The darkest period lasted less than three minutes.


The Silence of the Spheres

Although I’ve seen solar eclipses before, I wasn’t expecting the silence of the spheres to descend on me. A short time before the crescent shadow of the moon was beginning to be visible on the sun, everything stopped. Well, not everything. Cars still moved, etc., and so did people. But every single bird in the area where I live, just north of Nacogdoches, stopped singing and flying. Butterflies and moths stopped flitting about; instead they landed on trees and bushes and didn’t move a muscle until the eclipse was over. The wind stopped, the air temperature dropped at least 5 degrees, the sky changed to a bleached blue, clouds that had been in the area began to thin and disappear. The silence was deafening. Not a single peep or chirp. Nothing. Absolute quiet. Indeed, it was the day the birds stood still.

The experience was not just interesting, it was awe-inspiring and sent prickles down my back. I had heard that in total solar eclipses animals settled down and prepared to sleep, thinking night was coming, but everything I had read indicated that only happened during the few minutes of totality. Our period of stillness started before totality and lasted for a few minutes afterward.


Eclipses Brought Down to Earth

Just as fascinating, the eclipse image appeared not just in my pinhole projection but all over the ground under my trees as well. Under one of our oak trees, hundreds of mini-eclipses appeared as the tiny spaces among the leaves, acting as lenses, clearly projected 2 to 3-inch images of the eclipse.

I can only imagine the math involved in predicting eclipses. The earth is careening through space in its orbit around the sun at about 67,000 miles per hour. The moon is racing around Earth at 2,300 miles per hour. For an eclipse to take place, these speeding celestial bodies have to be in perfect synchrony to allow the moon to slip between us and the sun. Amazing. Calculations using calculus to make these predictions are on the Web. So if you want to be mind-boggled, check them out.

Solar eclipses have fascinated, and also frightened, people far back into antiquity. In China it was believed a giant dragon was eating the sun. Korean folklore says the eclipses are caused by wild dogs trying to eat old Sol. The ancient Greeks believed eclipses were harbingers of disasters and that the gods were warning the people of impending doom.

Some beliefs are still current. In a number of countries solar eclipses are considered dangerous to pregnant women and their unborn children. Young children, and women in general, are urged, in the interest of health, not to go outside during a solar eclipse. In India some people fast on the day of an eclipse in the belief that food prepared during the event will be poisonous. In my case, my recollection of the 2017 solar eclipse will be simple. It was the day the eclipse came to earth and silence reigned supreme. And get set. Our next total one here will be April 8, 2024.