Summer is winding down and the temperatures over the last week or so have been cooler. Instead of 105-110 degrees, we’ve been having daily highs in the mid-80s to low 90s. However, we haven’t had enough rain to know it. According to my data, July rain amounted to only 0.07,” August saw only 1.31” of rain and so far this month a mere 0.21” has fallen, for a total of only 1.59” The normal rain total for July, August, and September would be around 9.75.”

Humidity has often been in the low 20% range, and continues to be that low. Dr. Brian Oswald, Fire Ecologist for the Arthur Temple College of Forestry at Stephen F. Austin State University, says that plant moisture is now running about 45% instead of the 100-200% that should be the case. This not only makes plants drier and more likely to burn, but also reduces their internal water pressure causing trees, for example, to be more prone to breakage in wind. Combined with the fact that ground moisture dropped radically last summer, the current drought is really playing havoc with trees, shrubs, and grasses. My pond, usually stabilized by underground springs, is down about 4 feet. Worse, no relief is in sight. Even the recent tropical storm in the Gulf of Mexico, which might have alleviated the drought, drifted into western Florida rather than cruising over to the Texas coast. Deciduous trees and shrubs are shriveling and dropping their leaves, some as a protective measure against more moisture loss and others because they have given up and are dying. Flying over the Melrose fire areas last Thursday, it was apparent that oaks in particular are hard hit. 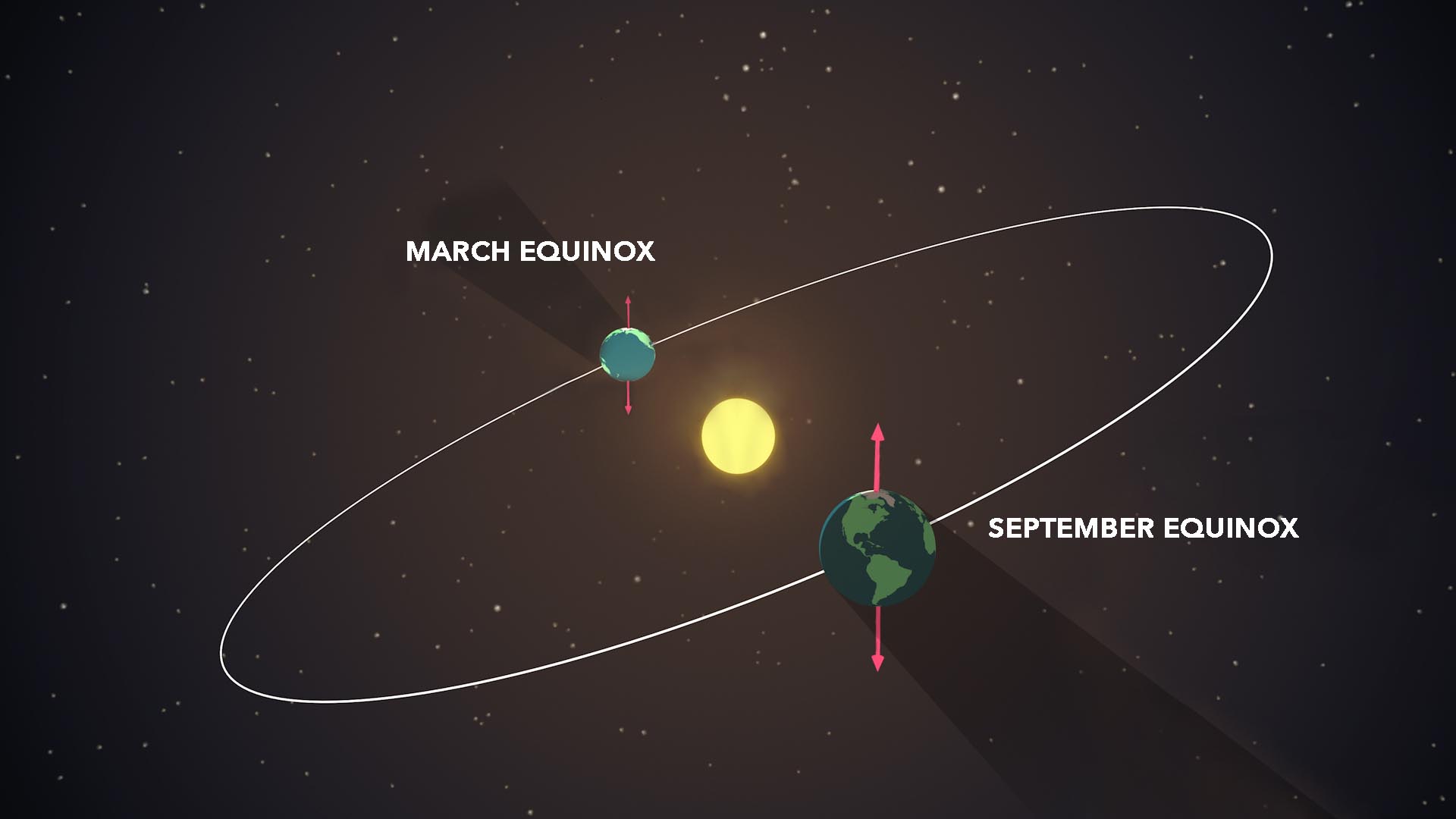 Image credits: NASA's Goddard Space Flight Center/Genna Duberstein
Because of the tilt of the earth’s axis, we are receiving less-direct sunlight, which means cooler temperatures.

Nevertheless, in spite of appearances, things are changing. The earth, in its unwavering orbit around the sun, due to the 23 ½-degree tilt of our polar axis, is now receiving less direct solar radiation, so continued cooling of the earth and its atmosphere are inevitable. The seasons, as they do every year, continue to progress. Perhaps you have noticed that the sun now rises and sets farther to the south than it did during the summer. On Friday, the 22nd of September at 10:27 am, it will have passed a point in the sky called the celestial equator and briefly, day and night will be the same length. Called the Autumnal Equinox, it is the day Fall formally begins. Actually, because of the refraction of our atmosphere, latitude, altitude and some other factors, our local day of equal night and day will be Tuesday, September 26th. After that, the sun will continue to descend the southern sky until the Winter Solstice about December 21st, the day of shortest daylight and the official beginning of Winter. As Fall progresses, the jet stream will tend to loop farther south and we should begin to receive more precipitation and even cooler temperatures.

Not only has our planet moved around the sun farther, but our night skies are changing and with low humidity, stars are much more visible. The giant square of Pegasus, the great winged horse of mythology, is rising over the eastern horizon after 8 pm, and on a clear moonless night the Andromeda Galaxy is a fuzzy elongated oval to its left, easily seen with the unaided eye and spectacular through binoculars. By 9 pm, the brilliant blue-white star Vega, of ‟Contact” fame, gleams almost overhead in the constellation Lyra. The Big Dipper, in the constellation Ursa Major (the Big Bear,) is now low in the northern sky and is descending farther each evening. By mid-October, it will be largely hidden in the trees, where it will spend most of the winter. A bit east of Lyra, but still almost overhead, in the center of the Milky Way Galaxy, Cygnus, The Swan grazes the darkness.

If you stay up late or rise early, you will see a preview of winter, as Taurus The Bull, thrusts himself over the eastern horizon with reddish Aldebaran shining as his eye, followed by the hourglass shape of Orion, The Hunter. This area of our sky is one of the most brilliant and beautiful and on the 22nd of this month, both Jupiter and Saturn can be seen in Taurus. Jupiter is the bright white object and orangish Saturn is just above it. Use binoculars to see four of Jupiter’s moons and a hint of Saturn’s rings.

Photo from sciencemeetsfood.org
Persimmons need a touch of frost to sweeten the fruit.

As the day length shortens, the biological clocks in living things trigger even more changes. My persimmon tree is loaded with fruit waiting for time and the touch of frost to sweeten them. Sumac has mounted bright red, fuzzy fruit along rural roadsides. Grasshoppers now seem to be everywhere and cicadas, often called locusts, are singing their last solos. Hummingbirds are less frequent visitors as they depart to begin their long migratory flights to Mexico, Central and South America, although some will be around well into October. Owls are calling more often in the evenings and nature seems to pause before the gentle transition of Fall into Winter.