It seems the orange of recent Halloween pumpkins is being passed along to fall foliage and the placid feel of hesitation that characterizes autumn has set in, so it must be time for my annual fall column on colors and meteors.

The varied colors of fall leaves have been hiding here all year, but they were masked by green, waiting for a little chemical magic to bring them to light. Vital to plant life, and critical for us as well, chlorophyll, when exposed to sunlight, allows green plants to make their own food. We benefit from this by eating plants, or animals that feed on plants, and the fact that the greenery also produces oxygen. However strange as it may seem, most of the latter comes from microscopic plants in the ocean, not trees and shrubs.

When I was a small child my mother fancifully told me fall leaves were painted by Jack Frost, a friendly little elf-like fellow, who carried pots of bright paint and a pack of brushes. I kind of like that story, but it’s really natural chemistry that tells trees it's color time, not Jack or frost. In fact, freezing temperatures can quickly destroy fall colors.

When the number of hours of daylight drops to a critical trigger level, trees stop producing chlorophyll and quit producing food for themselves. As the green chlorophyll fades, carotenoids, the same substances that color carrots orange and banana skins and sunflowers yellow, become visible. Xanthophylls show up as tan and brown while anthocyanins, formed from trapped sugar in the leaves, beam forth as red, blue and purple. Then all these colors combine to give us the wide spectrum we see and enjoy as autumn colors. 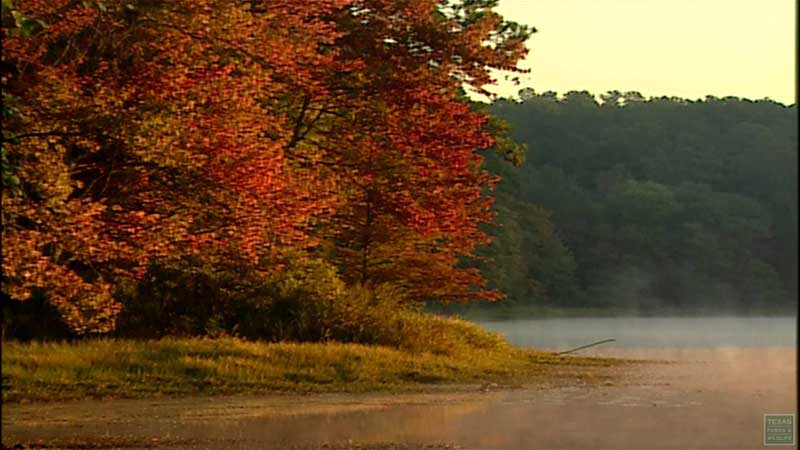 Photo by Texas Parks and Wildlife

During the same time that colors are beginning to show, a special layer glows across the stems (petioles) of leaves, weakening their attachment and causing them to drop off. The varied types of trees and shrubs change color and lose leaves at different times, spreading the display over several fall weeks.

Every tree and shrub has its own characteristic fall color. This week, sassafras is turning gold, while sumac and dogwood along with sweet gum are glowing brilliant red. As the season progresses, maples and oaks of many kinds will turn yellow, red and crimson. Poison ivy even helps with fall decorating, turning bright red, but be advised that it will still cause a rash at this time of the year and all through the winter.

In East Texas, colors are just beginning to change and fall, moving down from the north, will unveil beautiful scenes changing daily. Change comes in waves, first yellow, then orange and last red, with each new spectral burst separated from the next by five days to two weeks. Depending on weather and location, we should have nice leaf color well past Thanksgiving. Sunny, cool, dry days produce the best show, but cloudy, drizzly weather and warm days usually mean a disappointing color season.

The East Texas Guide on the Web is a great place to find information on the development of fall color and get information about scenic foliage drives. Spotters working with the East Texas Tourism Association provide reports for this site as well as locations to visit through the fall color season. Check it regularly.

And Then There Are Meteors

The Leonid Meteor Shower occurs annually. This year, November 14-21 will be the best observing nights, with the peak activity occurring on the 17th and 18th. From midnight on is the best time to look, but you're also likely to see many meteors during the evening of the 17th. Look to the east in the constellation Leo, from which the shower gets its name, as it rises higher in the sky after midnight. Most of the meteors will appear to radiate from that area of the sky, but many will be seen in other areas as well.

Astronomers predict this year will produce about 100 meteors or “shooting stars” per hour. This shower is caused when Earth passes through the debris cloud of Comet Tempel-Tuttle during its yearly orbit through space. The show is produced when particles strike the earth’s atmosphere at the staggering velocity of over 158,000 miles per hour. The friction of the atmosphere causes them to incandesce or “burn up”, ionizing the air around them to produce a bright streak across the sky. Sometimes a trail of ionized gas or “smoke” is briefly left behind. Meteors can be colorful – some are white, some yellow or gold and a few are orange. Most of these flashes are produced by tiny sand-sized particles. Hard to believe, but true. Larger fragments do sometimes come into the atmosphere and cause “fireballs” or bolides as they streak across the sky, breaking up, sometimes with a boom. Most disintegrate before striking the ground.

The last quarter moon will be in the same general location as Leo, so the dimmer meteors won’t be easily visible, but you’ll still see more than would be visible on ordinary nights. Go to an open area as far from streetlights as possible. For the best views, drive out into the country. Take a thermos of something warm, throw down a blanket and spend an awe-inspiring early morning watching fall colors in the sky. (Watch that you don’t put your blanket down on a fire ant mound!)

If you’d like to know more, go to your favorite search engine on the Web and enter “Leonid Meteor Shower 2003.”

In any case, whether you drive, walk or merely "veg out" in a recliner in your back yard, autumn in East Texas is the greatest time of the year, with crisp evenings and dark, star filled skies. Autumn beauty in the fields and forests - and skies - can bring you peace and tranquility, relieve stress, lower your blood pressure and lighten your burdens. Try it; you’ll like it!