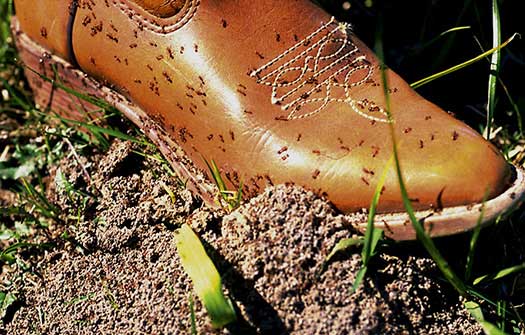 Photo by Dr. Bart Drees, TAMU Extension
A fire ant Attack Team storming up a cowboy boot. Fire ants have a limited sense of humor when it comes to trespassers.

The battle is on. The wet, warm weather has triggered a resurgence of fire ants. In lawns, along roadsides and in fields, these imported South American, short-tempered, six-legged warriors are experiencing their spring reactivation. Imported fire ants first arrived at the port of Mobile, Alabama in the late 1930s. According to the Texas Parks and Wildlife Department, they made their way to Texas in 1957, where they have done extremely well in the better-watered areas of the state.

If you ever get bored with the usual nature experience, try stirring up a fire ant nest. That can provide a real thrill, especially if you happen to be standing on it! Occasionally, I’ve managed to be the target for fire ants, usually when I’m thinking about something else instead of watching where I’m walking. But my wife is a prime target. Never have I seen insects move as fast as they do when they sense her approach. Apparently they’re racing each other to see who can climb her legs the fastest, stinging all the way!

Fire ant (pronounced “far ain’t” in East Texas) mounds vary greatly in size, but may be two feet or more in diameter, and 18 to 20 inches high. The nests beneath can be as deep as 6 to 10 feet but most are shallower. The nest below can contain 150,000 to 400,000 ants. Mounds are usually granular-looking piles of dirt with a crust on top, and often look deserted.

The next time you see one poke a stick into it and stir it a little. The crust will break, and unless the temperature is cold, ants in a variety of sizes will come boiling out of the nest. Reddish-brown and bent on revenge, they’ll seethe out like a sea of brownish foam. You’ll see mostly minor workers, about an eighth of an inch long, and major workers, about a quarter of an inch in length. White objects like rice grains in the stirred up soil are larvae and pupae that will later develop into adults. Deeper down in the nest are several hundred winged males and egg-laying queens.

Although fire ants have jaws and can bite, it’s the stinger mounted on the end of their abdomen that packs the real punch. The sting produces immediate, fiery pain - thus their name. Within 8 to 24 hours, a fluid-filled bump called a pustule rises at the site and begins to itch like crazy. Scratching can break it open and the site may become infected or leave a scar. Within five days to a week, the itching subsides and the skin will become normal again. For most of us, the fire ant sting is just an annoyance, but highly reactive people should see a doctor immediately. Some people swell up from the sting, and a few highly sensitive victims become very ill, showing symptoms that include breathing difficulty.

Fire ant colonies begin with a single queen, but mature colonies ordinarily contain several queens. After mating in midair with winged males, queens lay eggs in a burrow they have made, and 20-30 days later, workers begin to appear.

Fire ants can be controlled with insecticides and baits such as Amdro or Logic. Individual nests can be treated using poison mixed with water to saturate the mound, letting it soak down into the nest. Granular poison such as Amdro contains an attractant and an insecticide. Workers take the toxic particles down into their nests and feed the queen this deadly harvest. However, high temperatures and rain can deactivate poison baits, so it is best to use them during periods of cooler weather, especially during fall and spring. Amdro’s shelf life after opening the container, according to the manufacturer, is 3 months.

Although most people see fire ants outside, they sometimes get into buildings seeking water, sweet things, and meat. For some reason, they may be attracted to electrical junction boxes and switches, causing shorts. A spray insecticide containing pyrethroids works well indoors and is not particularly dangerous to people or pets.

So far, it seems the ants are winning the battle. However, entomologists are experimenting with parasitic flies that attack fire ants by harassing them and laying eggs on them. The eggs hatch into ant-eating larvae within the ant’s body and devour them from the inside out! We’ll see who gets the last laugh, the ants or us, in the fields and forests of East Texas.