I never cease to be amazed by the vibrant activity and changes that are part of spring in the fields and forests. Birds are singing their hearts out declaring territory and advertising for mates. Nests are being built, and eggs laid. The list is endless. 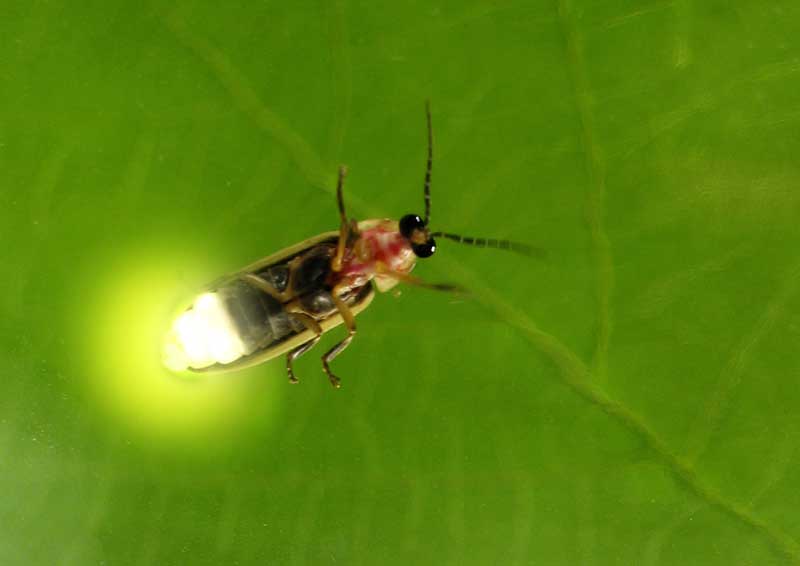 Photo by Anita Patterson Peppers
The last segments of this lightning bug’s abdomen are its flashers. Amazingly, they produce cold light, with virtually no heat.

Fireflies usually show up later in the season. But this year I’ve already seen a few early fliers trying out their strobe lights. Perhaps our wet spring is part of the reason. In any case, they are here, and especially when the humidity is high their flickering lights will appear in pastures and low areas, particularly along streams.

In my youth, we called these specially-adapted beetles lightning bugs, and most folks around here still do. With no TV, cell phones, or digital games to waste our minds on, we chased them with enthusiasm. Snatching them out of the air with our hands we put them in a jar where we could watch them glow. Or, being brutal boys with no concept of political correctness or insect rights, we sometimes pinched off their luminous tail segments and stuck them on our faces where they glowed for quite a time, like little greenish-yellow, demonic eyes.

Lightning bugs have a characteristic musty, buggy odor that in my “mind’s nose” I can smell even as I write this. Their smell is exactly like, well – lightning bugs. Anybody who has handled them knows what I mean. The rest of you will just have to run out on the next lightning-buggy evening, catch a few, and do your own bug sniffing.

In East Texas, fireflies are usually half to three-quarters of an inch long. The pattern of their rhythmic flashing varies with their sex and species. “Flashers” they are, but in violation of the law they are not, even though they have sex on their tiny little minds. Their sparkling messages are usually intended to attract mates – kind of an insect Morse Code. But some fireflies apparently flash to warn off predators – which, by the way, doesn’t work with frogs. Those sticky-tongued attackers happily snatch them up, perhaps pleased that they advertise their position so clearly. Some predatory firefly flashers use their illumination to attract other lightning bugs, and instead of mating, they eat the unwary responder.

Male lightning bugs fly; females stay on the ground, or on plants. A female will only respond to a male “flasher” if his light sends the correct code. Some firefly species send single, short flashes, others produce longer ones. A few types flash twice, pause, and then flash twice more. Still others send out three flashes in a row. The two chat a bit by trading flashes to assure they’re both the same species and, if the code and their attitudes match, they mate.

After mating, female fireflies lay tiny, glowing eggs just under the surface of the soil, which hatch in two to four weeks into tiny, predaceous larvae called glowworms. Their diet consists mostly of small snails and worms. After a summer of eating, they overwinter in small tunnels, emerging as the weather warms in the spring, become pupae, and finally change into adult fireflies the following season. Adults only live one or two weeks – just long enough to repeat the cycle.

A firefly flashes when a chemical called luciferin and an enzyme called luciferase, both named after the Biblical Lucifer, the Angel of Light who became Satan, combine with oxygen and adenosine triphosphate (ADP.) You’d think those little sparking critters would be hot to the touch, but the light produced has virtually no heat. Nearly 100% energy efficient, it is “cold” light, as compared to an incandescent light bulb of only about 3% efficiency, wasting 97% of its energy as heat. If fireflies were that inefficient they’d probably fry themselves with their first love affair. An amorous Fred Firefly would send a flash to Freda Firefly and pop!! Midair explosion, followed by a flaming crash!

We don’t fully understand how fireflies control their “on” and “off” switches so quickly, but they probably don’t care how it works. They just do it. Chemical light sticks are now sold in stores. Using firefly chemistry, they light up when the stick is crushed, mixing two chemicals inside, and they glow brightly for several hours. Light sticks are used as emergency light sources, and the military outlines combat landing zones and identifies troops with them.

For me these little insects are sparks of tranquility, leisurely drifting through spring and summer fields and forests. With today’s hustle, bustle, anxiety, and aggression, we can use all the peace and relaxation that’s available.