Fleas are pesky little biters, only 1/16 to 1/8 inch long, in the insect order Siphonaptera. That translates into English roughly as “little bloodsuckers that drink through a tube (siphon) and that have no wings (aptera).” 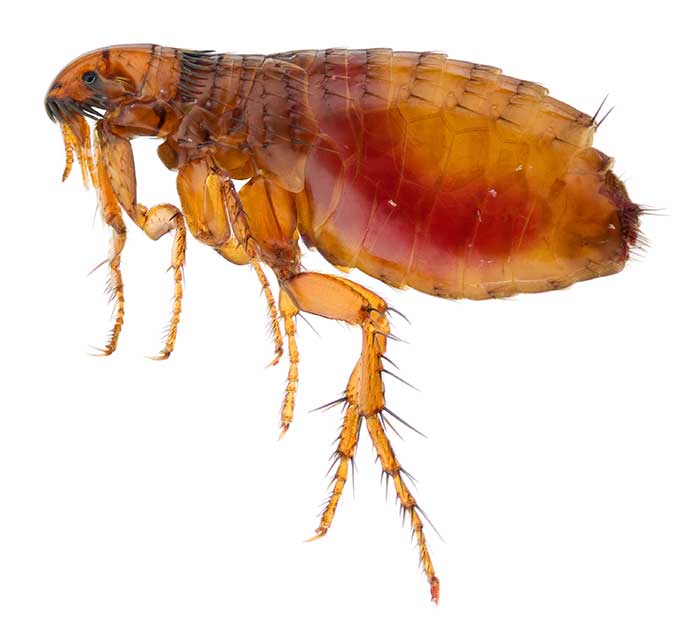 Photo courtesy of pestcontrolwrexham24.co.uk
Fleas have well-developed hind legs that allow them to jump amazing distances.

I once had a friend whose house was so infested with fleas that sitting in his living room resulted in fleas hopping all over me within a few minutes. Quite an experience. They could be seen jumping on the furniture and hopping out of the carpet. It was no coincidence that my friend had a house full of dogs that were loaded with the little critters. I generally avoided visits there.

Dogs are not the only hosts of fleas. They also are found on cats, humans, pigs, bats, chickens, rabbits, squirrels, rats, ferrets, mice, and prairie dogs, to name just a few. Multiplying like rabbits – well sort of – they can complete their entire life cycle in a month. Eggs, laid at the rate of about 50 a day by each female flea, fall into cracks in the floor or carpet, hatch into tiny worm-like larvae, change to pupae, and mature as adults looking for a meal. Luckily they are relatively easily controlled in homes and on pets by a wide variety of chemicals.

If you have pets, it behooves you to control their fleas, both for their comfort and safety, and yours. Sleeping with your cat or dog, as your Mama probably told you (or should have), is not a good idea. The hop from pet to person is easier with close contact.

Well-adapted to wandering through the fur of host animals, fleas are flattened from side to side – higher top to bottom than from side to side. They have rows of tiny, stiff spines facing toward their tail that help them maintain their position on an animal. Most insects are flattened from topside to underside. Fleas, because of their unusual shape, look a little top heavy.

If all fleas did was make pets and people itch, we might be able to minimize their status. However, they also carry a number of diseases, including plague. Plague – called the Black Death – was carried by fleas from Norway rats, and killed about 60% of the population of Europe in the 1300s. Nowadays plague occurs in our country in Arizona, Colorado, New Mexico, Utah, and Texas. 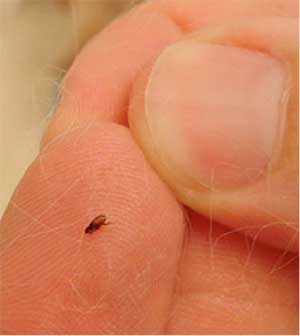 Photo courtesy of www.positive-pest-control.com
Fleas are very small insects, and often might not be noticed... until they jump.

Plague comes in three forms: bubonic, septicemic, and pneumonic. All three can be fatal if untreated. Bubonic causes a high fever and swollen lymph nodes that can become pus-filled and burst. These were the so-called buboes that originally gave plague its name. Septicemic plague spreads through the entire circulatory system, and pneumonic causes a pneumonia-like lung involvement and can be spread by sneezing and coughing. This latter form can kill in 24 hours without treatment. Fortunately, plague is treatable with antibiotics, but the drugs must be administered quickly when symptoms appear.

Jumping, hopping, biting pests, fleas are found throughout much of the world. They are amazing leapers. Their well-developed rear legs make them capable of jumps up to 6 inches in the air and 12 inches in distance. Years ago flea circuses were seen at carnivals and other public amusement parks. The fleas performed acrobatic tricks and were sometimes hitched to tiny carts. I haven’t seen one in years.

Petrovich Mussorgsky wrote an operatic “Song of the Flea” to a humorous text by Goethe.

Once upon a time lived a king
Who owned a handsome flea…
…a flea, hahahahaha …a flea.

He called the royal tailor
Who toiled for days and nights
To make the flea a doublet
And fancy purple tights.
…purple tights.
A flea hahahahaha …a flea.

The courtiers, male and female,
They were no longer gay.
The queen and all her ladies
Were pestered night and day, ha ha!

O you and I don’t worry
For fleas are easy to catch,
But think of those poor courtiers –
They weren’t allowed to scratch!

An alternate translation of this humorous work can be found here.