Foxes in East Texas? Oh yeah! Lots of them. But it’s funny how word meanings change. When I was younger, a fox was a canine fur-bearing mammal with a bushy tail, upright ears and a sharp, pointy nose or muzzle. To be foxy meant cunning, sly, sneaky or tricky – like a fox. Nowadays a sexy looking woman is sometimes referred to as a “fox” or “foxy.” By that definition, East Texas is full of “foxes” and they live all around us in our towns and cities. But nowadays with sexual harassment charges going wild, I guess that’s no longer a good thing to mention. Just forget I said it.

But for this article, I’m only talking about the forest dwelling, furry four-legged critters. And they are both cunning and tricky. Here in East Texas we have both gray and red foxes. Gray foxes are found throughout the state. Red foxes are confined mostly to the eastern half of Texas. 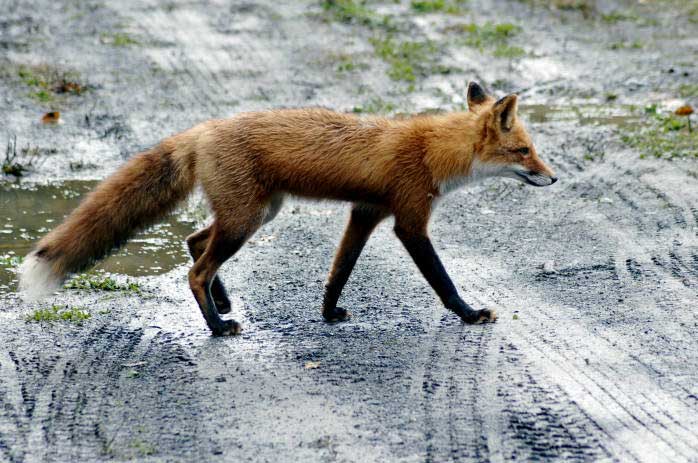 Recently, one of our light-weight bird baths on the patio was repeatedly knocked over. Putting a large rock in it solved the tipping problem. But one dark night I saw the culprit. A red fox was drinking from the bird bath with its front feet on the edge. Apparently he finally caught a glimpse of me because he was gone like a shot. To say he was fast is an understatement. However, he’s been back repeatedly.

I don’t know why he was so jumpy. Earlier that evening he came right up to our family room window with his nose against the glass peered curiously into the room. My chair was only about 4 feet from his beady little eyes.

The red fox was introduced to Texas in the latter 1800s for sporting purposes. Fox hunting with hounds has long been practiced in the United Kingdom as early as the 1500s. However, the practice was banned in Scotland in 2002 and in England and Wales in 2004. It is still practiced in parts of Europe and the United States. The term “tally-ho” is the cry a hunter gives when the fox is spotted. “Going to ground” meant that the fox had gone underground, usually to hide in a burrow. Particularly in Britain, going to ground is also a spy term meaning the hunted criminal has disappeared; gone “underground” or into hiding.

Red foxes are, as you would suspect, reddish or golden with a longer muzzle than gray foxes. The back of their ears and forelegs are black with a face that is buff or reddish buff color and a white throat. Their fluffy, white-tipped tail is almost as long as their body.

Food for both red and gray foxes includes small rodents, rabbits, crawfish, wild berries and insects or whatever else is be available.

The upper part of a gray fox’s body is grayish with tawny sides. The side of their muzzle and lower jaw has a black patch and their tail has a black stripe running lengthwise down its upper side without the white tip found in red foxes.

A gray fox’s face is smaller than the red fox with a significantly shorter muzzle and larger more prominent ears. In a fleeting glimpse the gray fox might be mistaken for a small coyote. The red fox’s tail is round in cross section while the gray fox has a triangular tail.

Amazingly, gray foxes are tree climbers and will sometimes escape pursuit by jumping into a tree. Although gray foxes usually have dens in burrows or rocky crevices, they sometimes have dens in trees. In “The Mammals of Texas – On-line Edition,” published by Texas Tech University it is reported that one East Texas den was found in a hollow oak 30 feet off the ground. The same publication reports that gray foxes are most numerous in areas once inhabited by coyotes. However foxes, in contrast to coyotes, are loners and don’t travel in packs.

So keep your eyes peeled for old Reynard. If you're lucky you may see him. He’s fast and he’s sneaky and he’s here. Just be glad you’re not a mouse or a rabbit in our fields and forests.