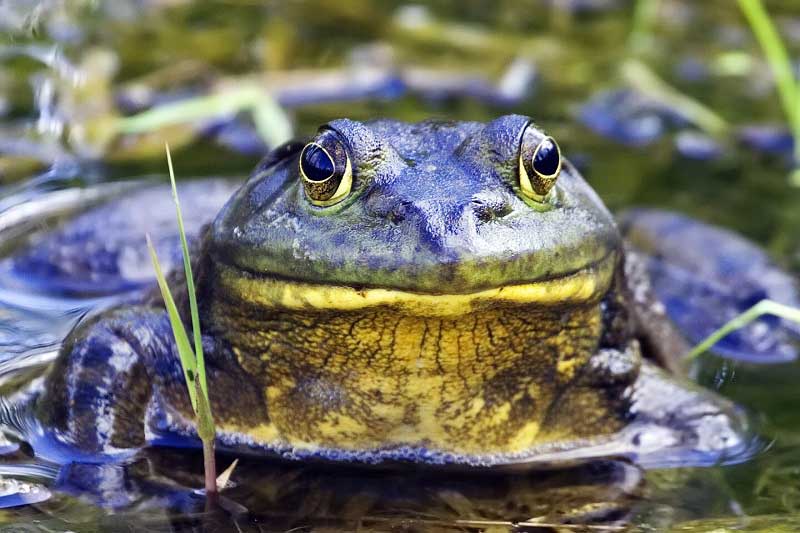 Wikipedia commons
An American bullfrog, smiling inscrutably while waiting for a meal, or a mate.

Imagine for a minute that you’re a frog – not a prince; a frog. Throughout the summer and fall, you’ve stuffed yourself full of luscious insects, spiders, and other gourmet amphibian delicacies. Then the weather cooled, and so did your metabolism. Comfortably fed and drowsy, you burrow into the mud or under a log and get set for a nice long winter’s nap. Then right in the middle of a great dream, the stupid springtime alarm clock goes off and you stumble out to see what’s up. It’s warm, and as your body temperature rises you’re not only hungry, but you develop a sudden irresistible urge to sing. What’s wrong with you? Well, Froggy, it’s spring, and hormones have taken control of your life.

So why do frogs (and toads) sing? Well, it’s not just that they like music, or are overly impressed by their own voices, like some people I know – usually politicians. One of the most important reasons is for advertising. They are looking for a mate, not political office. Their song says “I’m here, I’m handsome, beautiful, and available. Come on over, the water’s fine.” Notice I said handsome and beautiful. That’s because some frog species have both male and female vocalists. More commonly, however, it’s the male that does the opera stuff.

Another reason for singing is that frog symphonies serve to establish territory, declaring “I’m big, I’m bad, so find another place to hang.” Not only does the frog’s call identify its sacred realm, it may also serve as a message to determine how many can live in a particular area. Too many noisy neighbors and frogs may start looking for a quieter location.

Frogs will fight to discourage interlopers. However, a full-fledged frog fight isn’t very spectacular. Frog teeth are tiny and merely help hold food in their mouth while they squish it down their throat by pushing with their eyeballs and front legs. Combative frogs puff up, shove each other around, and once in awhile gum each other until one of them decides it’s just not worth all the effort.

A frog’s mating and territory calls are not its only vocal talent. They also have alarm calls – “Yikes! Something’s got me!” along with surprise calls, and various grunts and other sounds, including deep-pitched underwater sounds that aren’t audible to the human ear, and that scientists don’t know much about yet.

The sound of a frog’s song is produced by forcing air over their vocal cords into an inflatable sac under their chin. The sac acts as an amplifier to enhance the sound, and it’s not uncommon for some frogs to be heard a mile away. Volume is not necessarily an indication of a frog’s size, but pitch usually is. The big bullfrog with his deep Chug-arum! call clearly indicates his size. But in my experience, the loudest frogs are the tiny spring peepers. Is this another demonstration of the “small man” syndrome? Just a thought. About an inch and a half long, peepers produce a piercing, high pitched Peep! Peep! Peep! that in close contact is painful to hear. They are the ones, along with a few lower pitched chorus frogs, that fill early spring nights with amphibian opera.

Of course, there is also a liability to a frog’s call. The noisy suitor is giving away his position. Lots of animals think frog legs are a delicious snack, including me. Waterbirds, snakes, raccoons, other mammals, and even other frogs would like nothing better than to dine on them. So, a singing frog has to carefully listen for the approach of predators.

Now, back to you. You’re the frog – remember? The warm summer is waning, and as temperatures decrease you’re finding it harder and harder to keep up life’s fast tempo. Being a cold-blooded animal, your amorous solo slows as the muscles you use for singing and moving chill and you become lethargic and sleepy. Something in your tiny brain says, “Well, I guess it’s time for a long winter’s nap – but I’ll be baaaack!” And with a big yawn, you wiggle into a winter apartment to await spring. Life’s cycle in the Kermit world of the fields, forests, and swamps has come full circle. See you next year.