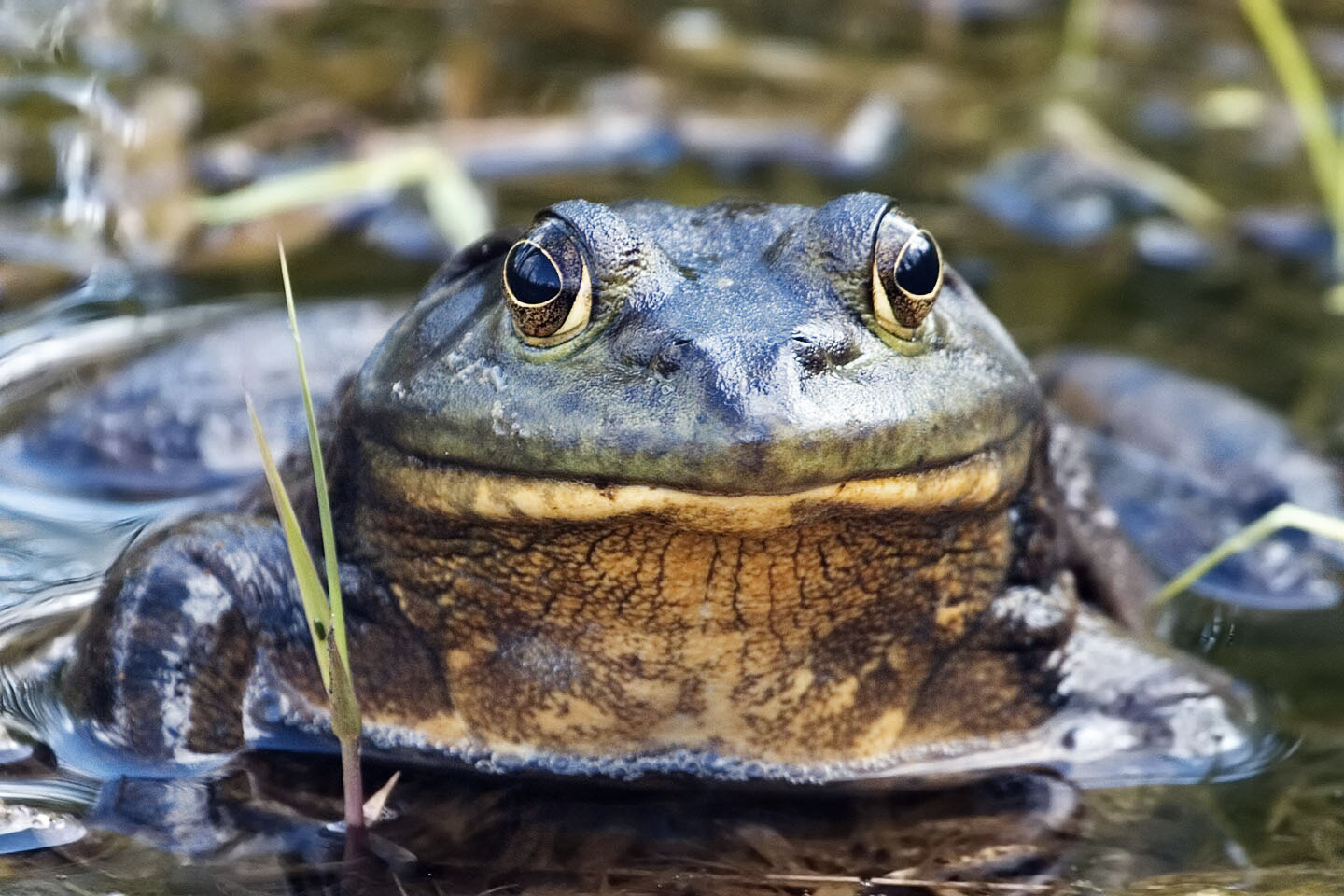 Photo courtesy of Wikipedia Commons
An American bullfrog smiling inscrutably while waiting for a meal.

Kermit the Frog, as we all know, doesn’t get the respect he deserves. But then, he’s green. What do you expect? Green creatures are usually fictitious alien beings with green blood and skin. And to top it off, Kermit speaks English rather than amphibese, the language of amphibians. But, I have to believe he can also speak to others of his kind in their native tongue.

Frogs are different is a number of ways. First of all, they are amphibians – they can exist on land and in the water. The military has borrowed this term for vehicles that can swim and move on land – amphibious vehicles.

But, when you get right down to it, frogs are strange in other ways.

How do Frogs Breathe?

Frogs, strange little croaking creatures that they are, handle breathing differently as they age. They breathe four different ways depending on how old they are. When a frog egg hatches, a wiggly tadpole emerges that can live only in water. It breathes through gills. Perhaps you thought only fish did that. Their gills absorb oxygen directly from the water in which they swim, releasing waste carbon dioxide at the same time. As they mature, the gills are slowly absorbed and primitive lungs begin to develop. For a time, tadpoles have both lungs and gills.

As the tadpole ages, the gills disappear and legs begin to grow. Their tail is completely absorbed, providing nourishment for the growing froglet. Ultimately, the totally aquatic tadpole makes a complete transformation or metamorphosis, to become a frog – an amphibian – capable of living both on land and in the water.

Adult frogs have skin that is always wet, a fact you already know if you’ve handled one. It’s also very different from your skin. It can absorb oxygen directly from the air, something that human skin cannot do. Just beneath the frog’s skin are networks of capillaries that carry off the oxygen to their cells and dump carbon dioxide into the air. Frogs have rather small inefficient lungs. Without their gas permeable skin, they would suffocate depending solely on their lungs. Since frogs must always have moist skin they generally live in and around wet places.

A dry frog is a dead frog so I assume Kermit must have a team that sprinkles him between scenes.

Kermit and his relatives have another trick. They breathe through their mouths, taking air in through their nostrils to their mouth which is lined with a special membrane that absorbs oxygen and releases carbon dioxide.

Besides everything else, frogs are cold blooded. Their body temperature is not maintained by their metabolism as ours is. They keep healthy by moving into and out of warmer and cooler places. Warm frogs are fast frogs and cold frogs are slow – a delight to those animals that dine on them, since they are easier to catch in their chilled, lethargic state.

How do Frogs Swallow?

First of all, they do it just as you and I, by forcing food back in their throat with their tongue and with muscles in their esophagus. But, being frogs, they have another trick as well.

Ever notice how bulgy a frog’s eyes are? One reason for this is so they can float in water with just their eyes showing. But another is that they use their eyes to force food down their throat. Yep, they swallow by pulling in their eyes. By retracting their bulbous eyes, they put pressure on the roof of their mouth to help slide their morsel of food down. Glump!

So in a nutshell. Frogs are complex and amazing. Keep your eyes and ears open. It’s frog time in the fields and forests. Maybe you’ll see Kermit there too.