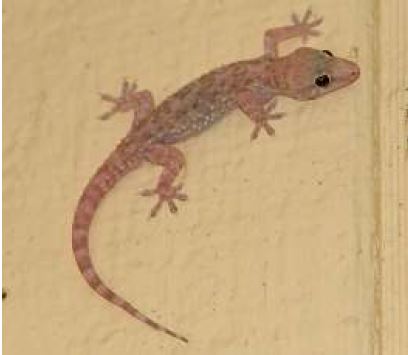 Photo by Paul H. Risk
A Mediterranean Gecko lurking on a house, waiting for dinner to arrive.

Numerous areas in the southern part of the United States, including portions of Florida, Georgia, Texas, and Arizona, are literally swarming with illegals that have neither been recognized, nor apprehended by the U.S. Border Patrol. They have established permanent homes and ways of life, and are steadily expanding their areas of occupation in an ongoing move north. But instead of people, these sneaky critters are lizards.

The intruders are Mediterranean Geckos, 3-4 inch long, pinkish, almost transparent, lizards with dark spots, sticky feet, big black beady eyes, and a voracious appetite for insects and spiders. They are reputed to have a particular fondness for cockroaches.

Mediterranean Geckos speak no English whatsoever and show no desire to learn it – another strike against them. And no, they do not sell insurance for Geico. That particular TV lizard personality’s accent leads me to believe he’s from Great Britain.

Mediterranean Geckos probably arrived in U.S. ports as stowaways on vessels from various Mediterranean countries and north Africa. Some sources state that U.S. citizens have even knowingly smuggled them into this country, temporarily housed and fed them, and when the novelty wore off, released the little critters into the environment on their own recognizance to colonize and spread.

One web site says Mediterranean Geckos are tenaciously established around a college in Austin, Texas, because a biology class released a bunch of them. If it’s true, that was not a good idea.

Are they in the Nacogdoches/Lufkin area? Absolutely. An anonymous source told me that some were also released by a class at a local university. However, I haven’t been able to verify this.

In any case, Medgecks (notice how familiar I’m getting with them?) are definitely well established in several areas of Nacogdoches. A friend emailed a picture he’d shot of one clinging to the wood siding under the eaves of his house. Later that week, he called to tell me there were 18 of them stuck on various parts of his house one evening.

Also known as House Geckos, they often literally hang around on the walls and ceilings of homes, both inside and outside, waiting for a meal. Some people don’t mind that. But other folks kind of resent their uninvited presence. One incensed homeowner said it’s especially disconcerting when one loses its footing and drops from the ceiling onto their breakfast table or bed. Oops!

Actually, I’m surprised they ever fall. They have wide toe pads covered with rows of tiny Velcro-like hairs with microscopic split ends that allow them to grip almost any surface. They can even walk up a glass windowpane.

When the light is just right, or they are perched on a windowpane, you can almost see through them. Translucent, their internal organs are visible to some extent. Their skin is smooth, with the exception of little soft bumps along their sides.

When they are developing eggs, the outline of the egg is often clearly visible inside the lizard. Eggs are laid in several clutches of two during the breeding season, beginning in spring and extending through mid-summer. The eggs require no parental care, hatching on their own, although the eggs are sometimes eaten by the geckos themselves. Disgusting!

The eyes of these lizards are particularly noticeable – large, bulging, and black, with vertically slit pupils and no eyelids. They lick their eyes to keep them moist. Try that yourself sometime when you’re bored.

So there you have it. The Medgecks have successfully inserted themselves into the ecosystem here in the southern U.S., and frankly, I kind of like them. Now, if we can just work on their language problem. Or maybe, we could all learn Geckonese as a second language. Sounds only fair to me here in the East Texas Fields and Forests.