Tall, thick and glowing along most of our country roads, goldenrod seems to be everywhere this fall. Topped with loose spikes of massed tiny bright yellow flowers at their tops it often reaches heights of 4 to 5 feet. Combined with fields of small yellow flowers in the sunflower family, it provides us with beautiful autumn gold and is a clear indicator that it’s almost winter. However, goldenrod continues to get a bum rap for causing hay fever – which it doesn’t. It is NOT a significant cause of allergic reactions. But ragweed, which also blooms in the fall, is. Ragweed’s spiky pollen grains make millions of sensitive people absolutely miserable this time of the year. 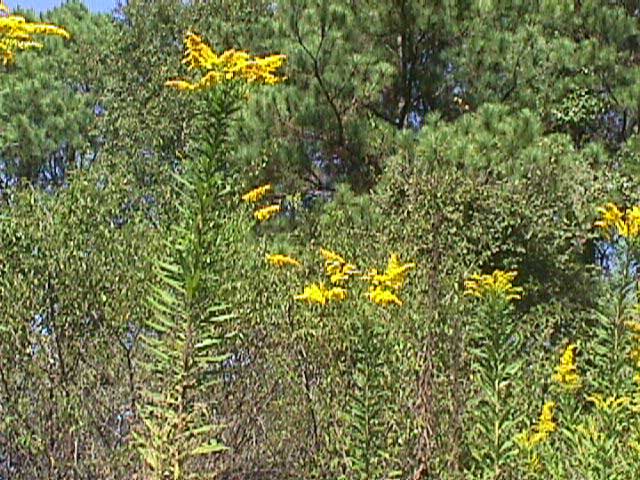 Photo by Paul H. Risk
Goldenrod is plentiful in East Texas this time of year.

There are more than a hundred species of goldenrod and some have been used for medicine and food well back into antiquity. Sweet goldenrod (Solidago odora) is harvested in some parts of the southwest United States and an essential oil is extracted from it. Its strong anise or licorice aroma and flavor make it easy to tell from other kinds of goldenrod. About one to three feet tall, its leaves and flowers have been used for many years as a hot herbal drink sometimes called Blue Mountain Tea. Place two cups of crushed leaves and flowers in a pan and pour four cups of boiling water over them. Allow the tea to steep for 10-20 minutes. It can be consumed hot with sugar and lemon or chilled and drunk as a cooling licorice flavored beverage. After the Boston Tea Party when tariff-protesting colonists dumped British tea in Boston harbor, sweet goldenrod was used as an ingredient in what became known as liberty tea. You can also make goldenrod jelly by brewing a cup of hot sweet goldenrod tea, straining it to remove leaves and little crawly critters, and mixing it with two tablespoons of pectin and 3/4 cup of sugar. After it cools and gels, it can be used like any other jelly.

Like many other wild plants, various kinds of goldenrod have been used in treating disease. During the mid to latter 1800s, goldenrod was listed as an official remedy in pharmaceutical texts as an astringent (to shrink organic tissue and reduce secretions or discharges), carminative (a soothing agent for gastrointestinal distress), diaphoretic (to cause sweating), diuretic (to increase urine production), and stimulant. Folk remedies using goldenrod have been recommended for periodontal disease, chronic eczema, arthritis, and nephritis (an inflammation of the kidneys). Chinese herbal medicine has used one goldenrod species to treat influenza, headache, sore throat, malaria, measles, gastric pain, vomiting, and intestinal worms. Other uses have included treatment for warts, tumors, and cancer. However, there are no scientific studies indicating success in controlling these maladies. 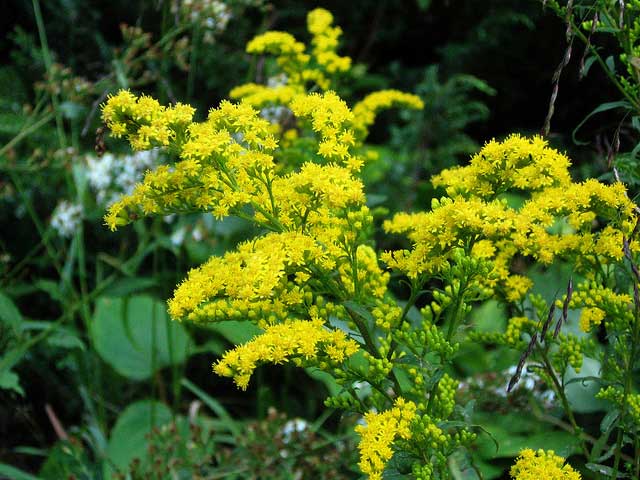 Photo by Dendroica cerulea on Flickr
It’s obvious where Goldenrod got its name by looking at the flowers.

Native Americans used the boiled leaves to treat wounds and ulcers, sprinkling the affected parts with the powdered leaves as a protective covering. Poultices of the leaves were used to treat saddle sores on horses, and Spanish Americans mixed the crushed plant leaves with soap to make a plaster that was bound on the outside of the neck for sore throats. In Russia a tea made from the leaves has been used for years to treat diarrhea and bladder inflammations.

From all this, it would seem that goldenrod is a medicinal cure-all – a panacea. It isn’t. If it really cured all the diseases listed, its active ingredients would be mass produced by companies worldwide and doctors would be nearly out of business. Although some of its physiological activity has been scientifically documented, other claims have not been. As with any herbal remedies, use them with extreme caution or even skepticism. If you are taking prescription or over-the-counter medicines, ask your physician before you use any herb. Your drug may interact with the herbal substance in a dangerous way. Also, be aware that you may be allergic to one of the many chemical components in the plant and serious problems could develop.

Goldenrod is one of nature’s most beautiful fall ornaments in East Texas fields and forests. However, it is probably best to just enjoy goldenrod’s beauty, find fascination in its folk and ancient uses, and perhaps indulge in a cup of Blue Mountain Tea, but experiment with its medicinal uses very cautiously.