Grackle rhymes with cackle and hackle, and both words apply to this big, brazen, iridescent blackbird. Their voice is a combination of a raucous cackle and crackle, and when I see them the hackles on my neck stand up. To my mind, they are nothing but obnoxious objectionable pests. I don’t even like the way they walk, an awkward step-by-step waddle, wobbling from side to side. Nope, I don’t like them at all, in case you haven’t gotten my drift. 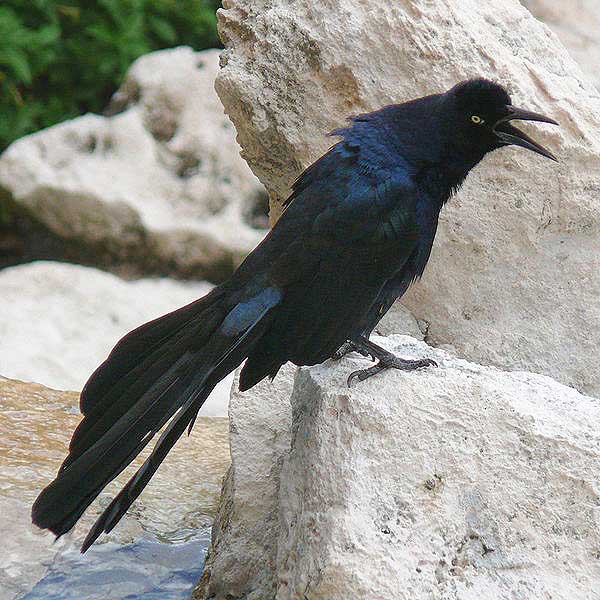 Wikipedia Commons
A great-tailed grackle doing what it does best – squawking.

Grackles, of one kind or another are everywhere it seems. In Texas there are three kinds: common grackles which are the smallest of the three, great-tailed grackles and boat-tailed grackles. The latter are found only along coastal areas in Texas and Louisiana. They damage fruit and other crops and are simply destructive unmitigated trespassers.

In Texas grackles often arrive in huge flocks of hundreds of birds, and seem to have a particular liking for shopping center parking lots where they congregate en-masse, squawking and rattling to beat the band. Elizabeth Weise in a USA Today article published January 6, 2013, wrote that a Kroger supermarket in Houston was so swamped with the awful avians that the parking lot was “black with birds.” Their droppings under their roost trees around the edges of the lot were everywhere and often up to two inches deep. Clean it up one day and then it was back the next! Here in Nacogdoches, Wal-Mart seems to be a preferred spot, where along with cackling and crackling, they sometimes exactly mimic the sound of someone whistling at a pretty woman. One Wal-Mart worker, Robert Truss, said more than one woman was startled enough to stop and look around to see who was whistling at them.

In the Dallas area I’ve seen some places where the trees were covered with so many grackles you could hardly see the leaves. Needless to say, drivers who parked beneath this feathered canopy returned to their vehicles to find a less than shiny, immaculately clean car waiting for them.

Great-tailed grackles, the kind found in most of Texas, are large, about 15-17 inches long, with a long keel-shaped tail that is often folded lengthwise like an inverted V. With their pale yellow, beady eyes and attitude, you won’t have trouble identifying them. The USDA has issued a depredation order allowing them to be “harassed and removed without permit.” The order applies if the birds are harming crops, damaging plants, affecting human health and safety, or even if they’re simply a nuisance. In other words, if you see them you can kill them. But check your local firearms laws before blazing away with your shotgun from the back porch.

“Bird cannons,” firecrackers, and flashing lasers have been used to drive them away, but with limited success. The bird cannons were so loud that Kroger said police were called by neighbors fearing that an attack of some kind was under way. They finally had success by spraying trees and others perches with a grape seed extract that repels the birds.

Frankly, if supermarkets would do a better job cleaning up their parking lots, the birds wouldn’t find so much trash to eat there and would move to better pastures.

Grackles originated in Central America where in ancient times Aztec kings prized their feathers for the iridescent blue-black luster. They can have them. They are spreading across the United States. Let’s open our southern border without restriction to these blasted birds and put up big one-way signs saying “Welcome to Grackles” and point them back south.

I simply dislike grackles with a passion. In short, my reaction to them is the same as Dr. Seuss’ feelings about Green Eggs and Ham, in his book by that name published by Random House in 1960.

So there! If I’ve offended any grackle lovers out there, I almost apologize… but not quite.