Grand Canyon is an Experience in Space, Solitude, and Silence 13 May 2016

The Grand Canyon is a geologic feature in northern Arizona of inexpressible grandeur. To visit it can be a shocking, awe-inspiring, wonderful lesson in the relative insignificance of humans. 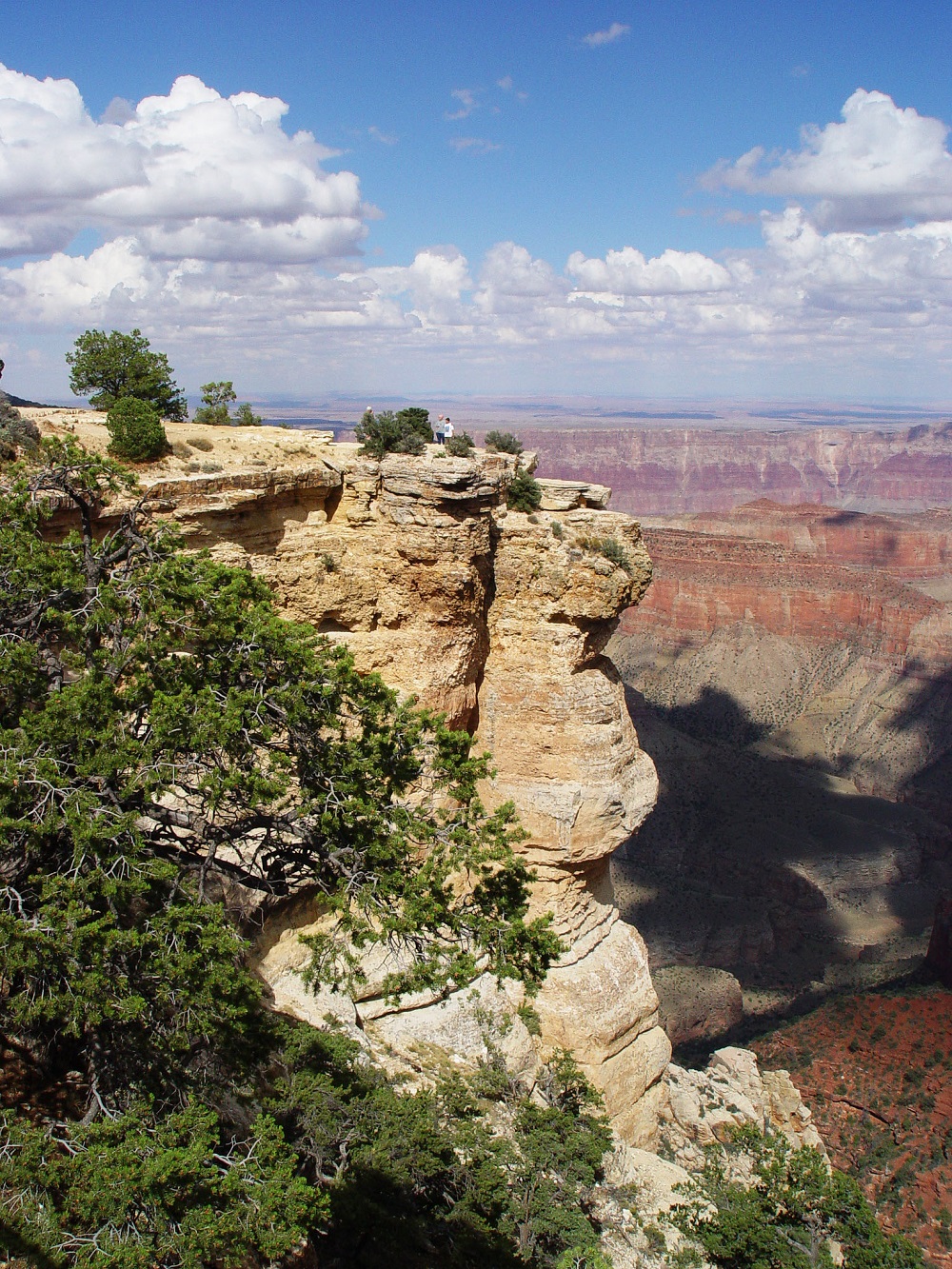 Layer after layer of red, orange, ochre, white, yellow, and pink sedimentary rock, remnants of millions of years of earth history, stretch to the distant horizons. Sunset colors and shadows change and drift, altering the view moment by moment. Pictures do it slim justice, stories don’t even come close. For me, it was a life-changing experience.

Arriving at the Canyon where I would soon wear the iconic flat-brimmed Ranger hat, gray shirt with the Park Service’s arrowhead insignia, and green trousers, my family and I stopped at Mather Point, named after the first NPS Director.

Opening at our feet the Canyon stretched 14 miles across, a mile deep, and 218 miles long. Violet-green swallows streaked past us, making impossible knife-edged turns like little jet fighters. Ravens soared on thermal currents rising from the depths. From time to time one would fold its wings and drop, tumbling like a feathered black rock, unfolding a moment later to soar again and repeat the performance, apparently just for fun.

The Canyon is a geologic and wildlife wonderland. Rock layers at the rim are about 250 million years old, and at the bottom, 1.7 billion. A hike into the canyon is to walk backward in time.

Many of the sedimentary rock layers contain fossils of animals and plants long gone when ancient seas covered the area; ferns, trilobites, sea lily stems, clams, snails, and myriad others.

Living plants and animals abound at different elevations; pines, junipers, sagebrush, yuccas, exotic wildflowers and others, mule deer, desert bighorn sheep, cougars, lizards, and snakes – including a rare pink rattlesnake. On the North Rim the Kaibab squirrel, found only there, has a black body, tufted ears, and a white tail to flip over their back for camouflage in the snowy winter. North Rim winters often produce 9 feet of snow on the level.

As a new Ranger, I was expected to hike across the gorge. Several of us flew to the North Rim in a small plane, then descended the 14-mile North Kaibab Trail to Phantom Ranch, planning to stay overnight and ascend the Bright Angel trail to the South Rim Village the next day – another 16 miles. An avid backpacker and experienced climber in prime shape, I was sure that wouldn’t be a problem. But hiking constantly downhill from the North Rim to Phantom Ranch wiped us out. We stayed an extra day before going up the Bright Angel trail to the top. The vertical distance from the North Rim to Phantom Ranch is a drop of 5717 feet – somewhat over a mile. From the river up to the South Rim is 4600 feet.

Recently a Flagstaff, Arizona man set a record by running from Grand Canyon’s North Rim to South Rim in 2 hours, 51 minutes, 28 seconds. Amazing, but sad. I wonder what this runner experienced of the intangible beauty that surrounded him.

Distances are only part of the story. As you descend, the temperature rises. In early summer it can be 80 degrees on the South Rim, and 120 degrees or higher at the bottom. It’s like hiking in an oven. Hikers should carry at least a gallon of water per person. Heat exhaustion and heat stroke are common and dangerous problems for hikers.

During my first training on the South Rim, the Chief Naturalist took us to a remote, seldom visited overlook at sunset. He told us to simply sit down and learn to “feel” the Canyon.

The absence of sound engulfed me like a tangible thing. I could feel it. An anonymous author best captured it by writing “The silence roared. I staggered back and heard my varnished ego crack.”

Too often park visitors would ask me, “Ranger, how long will it take me to do the Park.” If they had to ask that, they’d already lost. Unfortunately, the average stay on the South Rim is only 4 hours! I told them to get out of their car, find a secluded spot on the rim at sunrise or sunset, and quietly absorb the view. Then, I advised, the most vivid pictures they took away would not be in a camera but etched in their mind and heart.

Silence is therapeutic, but some people are frightened by it. So with dangling wires plugged into their skulls, they electronically transfuse sound into themselves, seeking security – or something. Silence has been sacrificed on the altar of cell phones, other digital noise-makers, traffic, horns, and noisy people.

Navajos say the Bellagana (white men) think they must fill all the silent places with words. But I can tell you that from silences are born great thoughts, perceptions, and life-changing experiences.

East Texas, too, is filled with beauty, tranquil vistas, soothing bird songs, and star-filled skies. You don’t have to be in Arizona to experience the wonders of our nation’s fields and forests. Find a place to be alone. Relax, and let your mind drift. Learn its secret message. You may become a better person as a result.