Photo courtesy of Jerry Schappert, The Bug Doctor, pestcemetery.com
This grasshopper doesn’t have a clue about what’s coming.

Summer has dragged on forever, but cooler weather is finally here. There are plenty of indications that fall really did start on September 22, at the time of the autumn equinox.

Grasshoppers have been multiplying faster than rabbits, and they are everywhere. Hopping, fluttering, clicking, buzzing, and fiddling, they are clearly oblivious to the Grim Reaper of winter lurking just offstage. True to Aesop’s tale of the ant and the grasshopper, those long-legged hoppers will lose their lives to the first killing frosts, while industrious ants will just huddle deep in their nests, awaiting the return of warmer weather.

Praying mantises, those fraudulently pious insect assassins, mate in the fall. Perverse eating machines that they are, the female often has her mate for breakfast following their nuptial night! She then lays several hundred eggs in a layered, light brown, foamy mass that hardens into a waterproof case glued tightly to trees, shrubs, grass stems, and the brick walls of my house. Jack Frost will snuff out her life, but the eggs will overwinter and produce a new crop of pest-eating mantises in the spring.

Walking stick insects, often four or more inches in length and only an eighth inch thick, concealed in grass and shrubs during the summer, make a brief public appearance in the fall. They are also short-timers. Soon they will lay a hundred or so birdshot-like eggs, letting them fall where they will, waiting for the warmth of spring to cause them to hatch. Then the adult walking sticks will pass on to insect heaven. 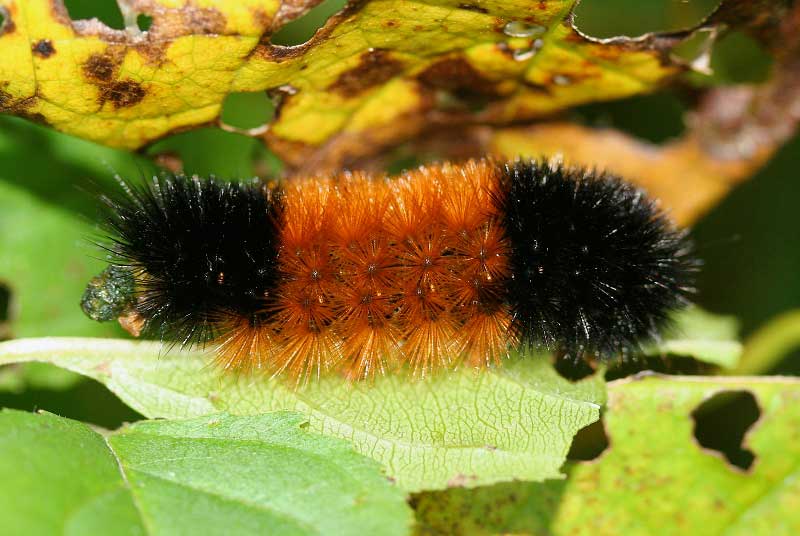 Wikipedia Commons
Woolly bears appear this time of year, but the width of their colored bands are not indication of the severity of the upcoming winter.

Woolly bears, those big, fuzzy, banded caterpillars that appear in the fall, offer other clues that summer is over. With a broad band of reddish-orange “fur” in their middle, and black hairs on their front and back ends, they are the larvae of the Isabella tiger moth. Hibernating through the winter under the bark of trees and beneath forest floor litter, they will emerge in the spring and cover themselves with a cocoon of silk mixed with their own hair. After a short time of transformation from a pupa to adult, they will emerge in late spring as an adult moth.

Weather myth proclaims that the narrower the woolly bear’s black bands, the more severe the winter, but scientists say bandwidth is dictated only by age and precipitation. Older caterpillars feeding in more moist areas have wider black bands. The patterns really do not predict winter’s rigors.

Love bugs appeared this fall too, sometimes in maddening clouds, clogging car radiators and smearing their greasy remains over windshields and paint jobs. If smashed lovebugs are not promptly removed from a car’s painted surfaces, they can inflict permanent damage, although the newer auto paint is more resistant to their acidic body liquids. Soapy water and elbow grease will take them off, but many people swear by Coca-Cola as a better cleaning agent. Just be sure you completely wash off the Coke so your car doesn’t become a prime target for ants!

Squirrels, of course, have been scurrying around for some time, gathering and storing acorns and other food. I’ve seen them holding pine cones like ears of corn as they bite the scales off to get at the seeds inside. When they finish munching they often drop these cone cores like bombs. Be careful where you stand. Squirrels are litterbugs; look for piles of cone scales and corncob-like cores littering the ground under their favorite pine trees.

Even the heavens proclaim the seasons changes. By 9:45 p.m., the Pleiades star cluster, known as the Seven Sisters, whom the ancients believed brought rain and cold weather, is now in the east with Taurus the Bull just below. Spectacular Orion the Hunter is just rising and will soon dominate the winter sky.

Meanwhile, the sun is sinking lower in the sky with each shortening day, and the earth is soaking up less and less heat. Soon we’ll be complaining that it’s too cold! So, go outside and see the changes taking place in the great outdoors. Fall is one of the grandest times of the year in East Texas!