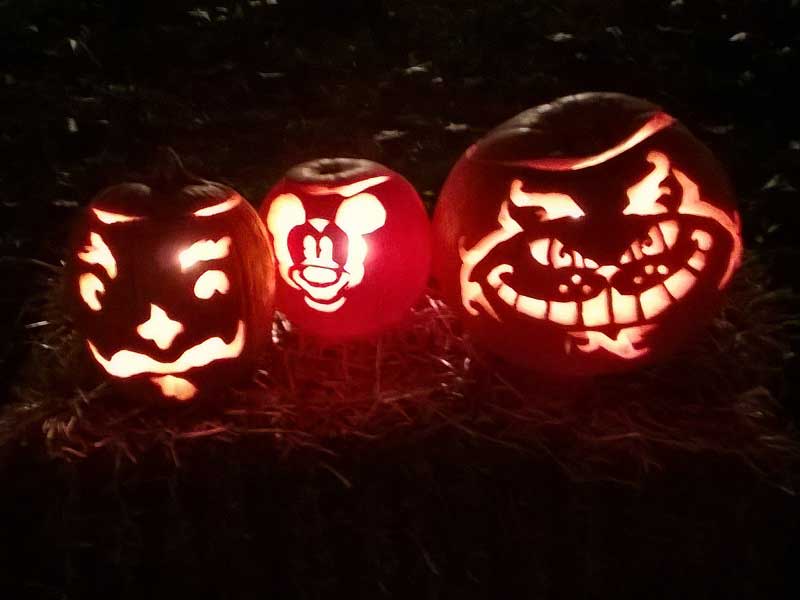 For generations, Halloween has been tied to myths and the supernatural. Scary animals we glimpse only briefly and usually at night, play an important part in the holiday. Bats, especially vampire bats, owls with huge glowing, glaring, yellow eyes, slinking black cats, scuttling spiders, and other creepy critters, along with a few ghosts and goblins, are often important parts of the Halloween mix. Fearsome stories about roaming spirits of the evil dead and witches add real chills to the night.

Formerly known as All Hallows Eve, Halloween was once a day to honor saints. However, according to the ancient Celts, summer officially ended on the 31st of October, and they named the holiday Samhain, the Celtic New Year. One Halloween belief is that on that day, the spirits of those who died during the preceding year return to possess the bodies of the living. For protection, people dressed in strange and frightening costumes to discourage the evil spirits.

Nowadays, spooky, glowing, candle-lit pumpkins – Jack-o-lanterns – appear in almost every window and in front of homes after dark. Even with carved smiles they seem to have a sinister appearance. A little imaginative sculpting with slits for eyes, downturned snarls and fangs and these Jack-o-lanterns make goose bumps rise on my arms.

According to Irish folk tales, the Jack-o-lantern originated when a drunkard named Jack tricked Satan into climbing a tree. After some intense bargaining, Jack promised to let him descend. But when Jack died, St. Peter refused to allow him into heaven because of his dealings with evil, and even the devil barred the door of hell to him. That left poor Jack roaming through the world in disembodied form forever. Satan did at least give him a glowing ember to light his way at night, placing it in a hollow turnip to make it last longer. In fact, the Irish originally used turnips as “Jack’s lanterns” But pumpkins work much better.

Personally, I like a little shiver down my spine at Halloween, and apparently so did James Whitcomb Riley, who in 1885 wrote Little Orphant Annie, a classic scary Halloween poem about bratty kids.

An’ one time a little girl ‘ud allus laugh an’ grin,
An’ make fun of ever’ one, an’ all her blood-an’-kin;
An’ wunst, when they was “company,” an’ ole folks wuz there,
She mocked ‘em an’ shocked ‘em, an’ said she didn’t care!
An’ thist as she kicked her heels, an’ turn’t to run an’ hide,
They wuz two great big Black Things a-standin’ by her side,
An’ they snatched her through the ceilin’ ‘fore she knowed what she’s about!
An’ the Gobble-uns ‘ll git you
Ef you
Don’t
Watch
Out!

He then followed up with a warning about skipping your prayers:

Wunst they wuz a little boy wouldn’t say his prayers, ––
An’ when he went to bed at night, away up-stairs,
His Mammy heerd him holler, an’ his Daddy heerd him bawl,
An’ when they turn’t the kivvers down, he wuzn’t there at all!
An’ they seeked him in the rafter-room, an’ cubby-hole, an’ press,
An’ seeked him up the chimbly-flue, an’ ever’-wheres, I guess;
But all they ever found wuz thist his pants an’ roundabout: ––
An’ the Gobble-uns ‘ll git you
Ef you
Don’t
Watch
Out!

An’ little Orphant Annie says, when the blaze is blue,
An’ the lamp-wick sputters, an’ the wind goes woo-oo!
An’ you hear the crickets quit, an’ the moon is gray,
An’ the lightnin’-bugs in dew is all squenched away, ––
You better mind yer parunts, an’ yer teachurs fond an’ dear,
An’ the Gobble-uns ‘ll git you
Ef you
Don’t
Watch
Out!

Nowadays Halloween is mostly just a good time with costumes, ripe apples, sweet cider, donuts, crisp fall air, and hayrides through the fields and forests. Just relax and enjoy it. Remember, too many adults can spoil almost anything fun.

This year the moon will ride high overhead by 8 p.m. on Halloween night and will be a little more than half full, just enough to add a mysterious illumination to the night. Maybe you’ll see the quickly-flitting shadow of a broom-riding, warty-nosed hag with a tall, pointy hat fly across its gleaming crescent. Or maybe it will only be the silhouette of a migrating goose heading south. But in our fields and forests… you never know. The goblins might git you yet, if you don’t watch out!!