I looked out the window and what did I see? A yellow-eyed hawk looking back at me, perched in our Tulip Magnolia tree. In a less poetical but more analytic vein, I noticed that it was comfortably ensconced on a sturdy limb 4 feet from the ground and about 12 feet from our bird feeders. As I came to the window to take its picture, it swiveled its head around and watched me but made no effort to flee. 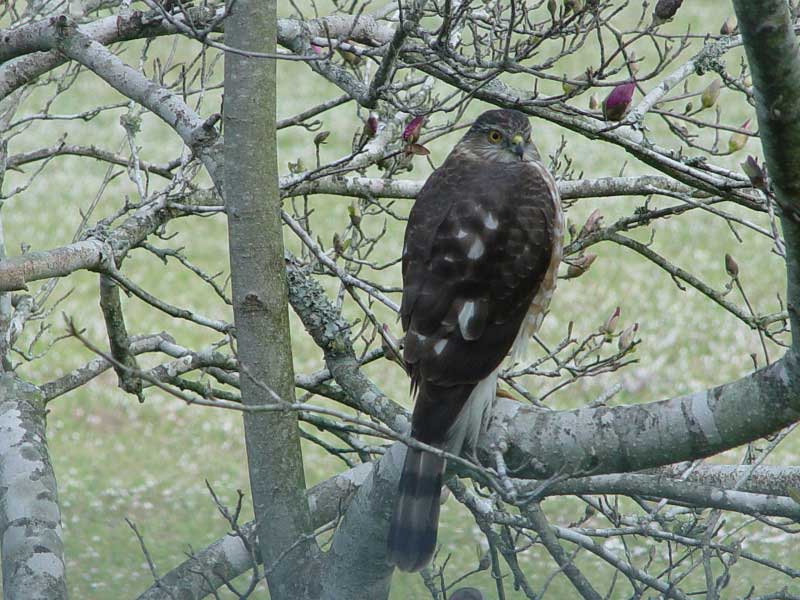 Photo by Paul H. Risk
This immature sharp-shinned hawk was lurking in a Tulip Magnolia tree only 12 feet from our bird feeders, watching for a meal.

Taking pictures through a window between the slats of Venetian blinds isn’t the ideal setup for crystal clear and sharp pictures, but this one is the not-too-bad result of my stealth camera work.

There were only three possibilities as to the hawk’s identity: a Merlin, sometimes called a pigeon hawk, a Cooper’s hawk, or a sharp-shinned hawk. Not being an expert birder, I emailed Dr. Donald Burt at Stephen F. Austin State University and Mr. Cliff Shackelford with Texas Parks and Wildlife. Comparison with measurements of its branch perch and other twigs on the small Magnolia tree allowed us to determine its size and decide it was a sharp-shinned hawk. These birds are small, only about 12 inches long, or slightly less, from tail tip to top of head, with a fairly long, banded tail and rounded wing tips, and according to Shackelford, are often seen in Texas during fall and spring migrations and during the winter. Its yellow eyes and white patches on its back helped with identification as an immature.

Ours launched an aerial attack by zigzagging in a crazy rush through the branches of a bird-laden hawthorn tree near the bird feeder. However, even its stunt flying didn’t net it a meal. And once the local birds realized the hawk was around, they vacated the feeder entirely.

These hawks have a particular fondness for songbirds, with cardinals and blue jays high on their list of gourmet meals, and we have a super-abundance of cardinals at our sunflower seed feeder. Recently, there were 18 of them perched awaiting their turn in the small hawthorn tree next to the feeder. Frankly, cardinals are not the brightest candles on the cake. When we had a cat (it died) they would often sit on the ground, stupidly gazing at Hobbes as he stalked them. Sad.

Like feathered acrobatic stunt planes these hawks can zigzag through very dense branches in the forest in pursuit of a meal in what appears a suicide mission. They can fly at 30 miles per hour, and far exceed that in dives. It’s a wonder they don’t “crash and burn,” as a fighter pilot would say, but obviously, they are able to make a living in spite of reckless flying that would bring a pilot to the attention of the FAA and NTSB and cost them their license.

A few years ago a hawk I didn’t recognize swooped out of the blue and snatched a chickadee off the feeder perch right in front of us. Feeders are often targets for hawks, and some birders become incensed by that. But hawks are an amazing part of the natural ecosystem, and they have to eat too. Too often we assign artificial ratings of good animals and bad animals. Come on. They’re just animals, whether feathered or furred, just doing their thing to stay alive.

Sharpy’s lay their eggs from May to July, usually producing 3-8 eggs in a clutch. They are incubated both by the male and female and hatch in about 35 days. They can fly in 25 days, but the fledglings stay with or near their parents for 21 to 50 days.

Hawks have very sharp eyesight. Normal for humans is 20/20, meaning you can read a line on the eye chart clearly at 20 feet away. Hawks, on the other hand have 20/2 vision. They can see something at 20 feet that a normal person would have to be within 2 feet of. They could easily read a book twenty feet away. They may also be able to see a wider color spectrum than we can, enabling them to more clearly identify prey. Coupling that with their highly developed ability to sense movement and tremendous flight ability means that they are very efficient at what they do.

In any case, keep your own eyes peeled and perhaps you’ll be able to spot one of any number of hawk types in the great outdoors. They are truly an awe-inspiring sight.