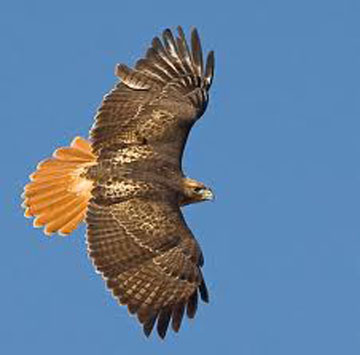 Photo courtesy of USDA
A Red-tailed hawk soars high in the sky looking for a meal.

Soaring majestically, two hawks circled leisurely over the forest at the edge of our lawn last Wednesday. Obviously together, the two matched each other’s turns and banks flawlessly. One screamed and within moments another pair was circling an adjacent area of sky. The first ones disappeared and the other ones swept down into a nearby pine tree.

There was no mistaking that screaming call. They were Red-tailed hawks, perhaps the most common birds of prey in North America. So many people are familiar with the Red-tail’s scream that Hollywood often dubs it into wilderness movies even when the bird on the screen is another hawk or an eagle.

Red-tailed hawks are large, weighing about three pounds, with an eye-popping 3 ½ to 4 ½-foot wingspread. Their wings are broad with rounded tips and – surprise – their broad tail is a distinct reddish rust color.

They are found throughout the United States, as well as in southern Canada and parts of Mexico. During the summer months they migrate as far north as Alaska and the Arctic.

They are often seen riding high on wind currents scanning the ground for food. Their ability to see mice and other small animals from high in the air is stunning. It is estimated that their eyesight is 8 times better than that of a human.

Relatively long-lived and monogamous, these spectacular birds mate with the same spouse year after year until one of the pair dies. Average life span is 10-15 years. According to Cornell University’s Ornithology Lab, the oldest known red-tail lived just over 28 years.

The female lays one to three eggs, depending on the availability of prey, and they hatch in 28 to 35 days. The hatchlings are called eyasses (EYE-a-sess). Try that on your trivia game! Nests are constructed of twigs and sticks and are often three feet wide and three feet or more deep. Located at or near the tops of trees they have a clear view of approaching danger or competition. Nests from previous seasons are often reused by pairs of hawks. 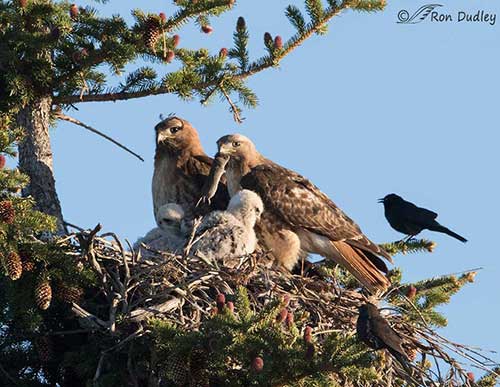 Photo by Rod Dudley
A pair of Red-tailed hawks care for their young on their nest of twigs and sticks.

Great-horned owls nest earlier than Red-tails and often take over a used hawk nest from the previous season; not something that returning Red-tails appreciate. Squabbles and chases often erupt when the hawks chase owls attempting to invade their territory.

Red-tailed hawks are birds of prey – raptors. Their needle-sharp talons allow them to swoop to the ground, attack, and clutch their squirming meal. A hooked beak enables them to tear their prey into bite-sized – or gulpable – pieces.

Not vegetarians or vegans by any means, Red-tailed hawks go by one rule: If it’s not too large and it moves, kill it and eat it. Most meals they munch are relatively small and include mice, chipmunks, ground and tree squirrels, and woodchucks. But they have been known to prey on jackrabbits – a critter that is about twice the weight of the hawk. Other birds and reptiles are also eaten.

Much to my amazement one evening I watched as a Red-tail swooped down and snatched a chickadee perched on our backyard bird feeder. Not much of a meal, but maybe it was just an hors d'oeuvre. One afternoon I watched as one of these raptors chased a squirrel around a pine tree in front of the Forestry Building at Stephen F. Austin State University. It alternated flapping, zigzag flight, and limb hopping until it finally nailed the hapless, bushy-tailed rodent and off it flew.

The feathers of these hawks are considered sacred by some Native Americans and are used in ceremonies and as decorations on clothing. However, with the exception of Native Americans, possession of hawk feathers is prohibited by federal law.

Hawks are truly impressive animals in the fields and forests of East Texas, and the Red-tail is one of the most spectacular. Feel privileged if you’re lucky enough to live near them.