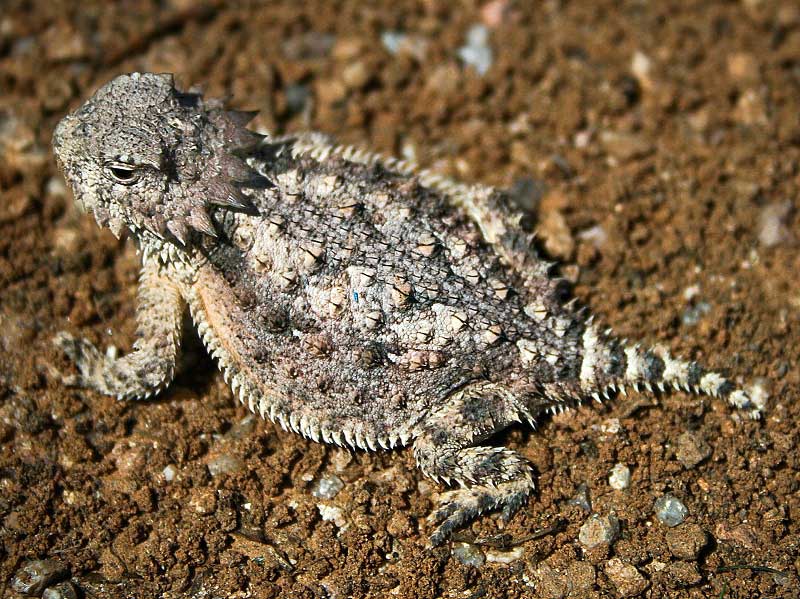 Horned lizards have ancient roots. Their fossil remains date back 15-25 million years and are represented in ancient Indian designs on pottery, petroglyphs, and as carved figures of the “ancient ones,” the Anasazi, Hohokam, Mogollon, and Mimbres cultures. Hopi, Navajo, Papago, Pima, and Zuni, among others, were also aware of horned lizards, and believed them to be sacred and possessed of great power.

An old Navajo tale recounts a battle between “Old Grandfather” – the horned lizard, and Lightning. During their lengthy harangue Grandfather, unobserved, quickly slipped out of his thorny skin, hanging it in plain sight on a Grama Grass stem while he hid behind a rock yelling insults. Lightning, apparently a little shy on eyesight, found that his bolts had no effect at all on Grandfather’s empty hide. Earth-shaking thunder didn’t frighten him either. Finally, his power drained, Lightning, and a very tired Thunderbird, drifted away into the sunset affirming to all the creatures that Grandfather was the most powerful animal on the earth. Traditional Navajos may pick up a horned lizard, but believe it must be placed gently back in its original location and position to avoid suffering evil and dangerous consequences.

Horned lizards generally protect themselves by blending into their background, remaining motionless, and being very tough to swallow. Their spiny skins and heads make them quite a mouthful, and some animals have been found dead with a horned lizard jammed in their mouth or throat. 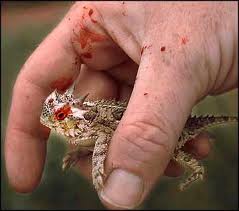 Horned lizards really do squirt blood from their eyes to discourage attackers.

So, where’d they all go? In 22 years I have yet to see one in our area. Information from Chip Ruthven with Texas Parks and Wildlife indicates that a tremendous decline in numbers occurred during the 1950s, 60s, and 70s, and he suggests that loss of habitat, perhaps from brush control and livestock over-grazing, collection for the pet trade, and the introduction of fire ants have been responsible. Them durn "far aint’s” are at it again! Although horned lizards eat other ants, fire ants may be too spicy for them.

Since 1967 the horned lizard has been legally protected in Texas, and is our state reptile. If you see one, count yourself lucky. But if you pick up “Old Grandfather,” take a lesson from the Navajo and put it back exactly the way you found it. Not only is it a fragile and disappearing part of our Texas heritage, you also don’t want to tempt fate.