Bald-faced hornets, also called white-faced hornets or bald-faced yellowjackets, are one of several stinging insects that are troublesome in the south and southeast parts of the United States. They are often ¾” long – large for a wasp. Their black bodies with white markings and a conspicuous white face are the hallmarks of these animals. Known not only for their unusual teardrop-shaped nest but also for their nasty attitudes, these wasps will soon be setting up housekeeping in our area. 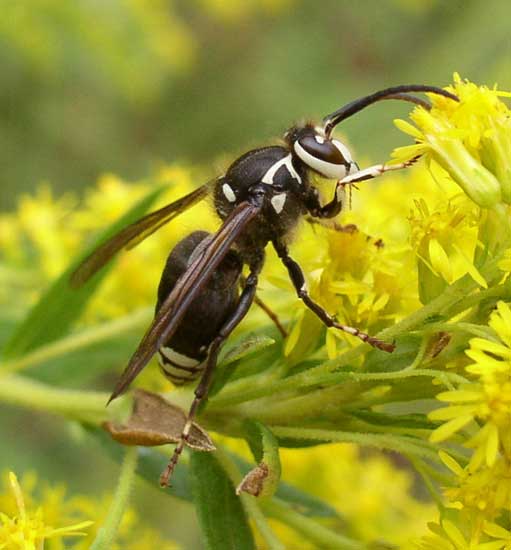 Although temperatures in the teens and twenties have recently reminded us that winter is not yet over, warm weather preceded the cold snap, and now it’s back. Winter seemed only to get a feeble grip on East Texas this year and during several warm spells lately, wasps were flying around looking for possible nest sites. Their activity will increase as spring comes on.

Bald-faced hornets build the largest aerial nest of any of our wasps, often as large as a basketball, and sometimes twice that size. Adult wasps seek out wood fiber and even old boxes to chew up and mix with saliva, forming a papery material they use to build their nest. Perhaps they were the first paper mills. Hornet nests are not open like those of red wasps; they are composed of several tiers or layers of paper brood cells arranged like the floors in a building. These are then enclosed with a smooth, wavy-appearing covering of the same paper used to make the interior. There is a hole about an inch or so in diameter toward the lower, narrow end of the nest through which wasps enter and leave. Nests are often constructed in trees or shrubs, but may be found attached to buildings under roof overhangs, in attics, or partially inside hollow wall sections or crevices.

There may be 300-500 workers in the nest, all females, with stingers and the urge to use them if they feel threatened. In general, hornets are not terribly aggressive as they forage, but closely approaching their nest may worry them and cause a humming cloud of liberated female attackers to descend on you. Males are few, do not sting, and serve only for mating purposes. In the spring, a single fertilized female, the only survivor from last year’s hundreds, emerges from a pile of leaves, a dead log, from under the bark of a dead tree, or other protected location where she spent the winter in torpid inactivity. Immediately she begins to build a nest and lay eggs that hatch into female workers. This first generation of laborers seeks out insects and their larvae that they chew into a mush to feed developing hornet larvae. Workers continue to enlarge the nest throughout the summer, making more brood cells. At the end of the season, a few larvae develop into males that mate with selected females, which will go their own way to find a safe over-wintering location and await spring to start everything over again. The old nest is not re-used the next season.

Adult hornets dine on nectar, fruit juices, and an occasional insect. Their taste for fruit makes them, along with yellowjackets, likely pests at late summer or fall picnics. By that time, their interest in feeding their own larvae has ended, their death is imminent, and their sole interest seems to be to eat, drink, and be merry. They are frequent visitors to open garbage cans, and if your picnic includes peaches or apple pie, they will often drop in for a snack. Swatting at them tests their notably short tempers, and they often sting to let you know they resent your lack of hospitality. 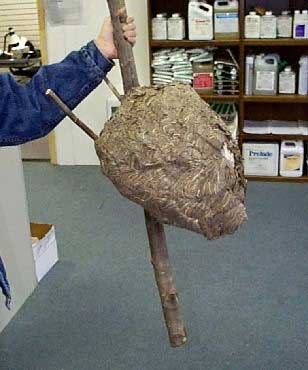 Like all wasps, a single individual can sting numerous times, and their stinger does not remain in the wound. Benadryl, both oral and topical, can ease the pain and swelling. Probably the most effective tool for treating wasp stings is the Sawyer Extractor, a suction device sold in most outdoor supply stores. Used immediately after the sting, it usually removes enough venom to almost completely halt symptoms. If the whole tribe comes after you, stinging numerous times, the results can be very dangerous, and a quick trip to a physician or emergency room is in order. In rare instances, a single hornet, wasp or bee sting may cause a life-threatening shock.

Although most people don’t like hornets, they are an important part of the ecosystem, feeding on insects we think of as pests, and providing food for bears, skunks, some birds, and other animals that eat their larvae.

In any case, hornets are an integral part of the environment, and as long as they aren’t too close to your home and don’t pose an immediate threat, it’s probably just as well to leave them alone. Certainly, their nests are an interesting and somewhat unusual addition to the fascinating and complex world of the outdoors.