Horseflies; not houseflies. The latter is small, and some kinds bite, but horseflies win the bite contest hands down. One of the largest flies we have, horseflies can be up to an inch and a quarter long with a large head and eyes. They fly like blazes and bite like horses. A horsefly bite is one of the most painful bites in the insect world, and there are plenty of them. It has been estimated that there are approximately 4000 kinds of horseflies in the world.

Large, their wings sweep back when they aren’t in flight. Flying, their airspeed can be 90 mph or faster. Noisy fliers, their approach is not a sneak attack, it’s a loud aerial assault. There are more than 150 different kinds of horseflies in the United States.

Actually, horseflies don’t bite; they slice. Rather than inserting a sharp, penetrating, needle-like sucking mechanism like many other blood-feeding insects, their mouth has two pairs of cutting blades with tiny saw teeth along their edge. So they slash rather than suck up blood through a “straw.” Then they lap up the blood oozing from the incision. Their cutting instruments are so sharp they can bite through clothing, fur, and horse or cow hide with ease.

A horsefly bite can become inflamed, swollen, red, and infected. Consult a doctor if these symptoms develop.

Besides everything else, they are pesky. Swat at them and they briefly fly away, only to return to get another drink of blood or make a new wound. 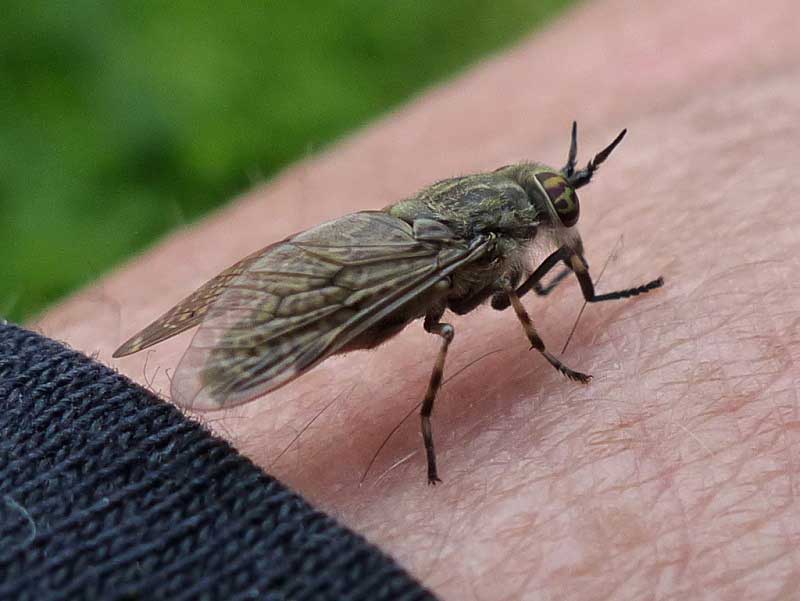 Photo courtesy of Picasa
Large, fast, and vicious, horseflies are sources of misery and disease for livestock, and sometimes people as well.

As you might suspect, horseflies are often found around horses and other livestock where they typically focus on the animal’s legs. But any part of a human is also fair game. And if you’re a victim, it won’t be subtle. You’ll be clearly aware of the attack since their attack hurts so much. Both male and female horseflies bite and drink blood, but, similar to mosquitoes, only the females need blood to reproduce. Males feed mostly on plant nectar and pollen. Adult horseflies have a limited lifespan of only 30-60 days.

Tularemia and anthrax can rarely be transmitted to humans by infected horseflies, but there are a number of other diseases that can be acquired by livestock from horsefly bites.

If you’re old enough you may remember that Mobil Oil’s emblem was a flying horse. Often referred to as “The Flying Red Horse,” it was originally mounted on top of the Magnolia Building, 450 feet above the street in Dallas, and could be seen by aircraft 65 miles away. Rust and corrosion finally set in and it had to be rebuilt, at a cost of over $500,000. And it still flies as a Dallas icon, to my knowledge. And thankfully, the horse atop the Dallas building is not pestered by correspondingly large flies.

The original flying horse from antiquity was Pegasus, the winged equine of the Greeks, whose father was Poseidon, and his mother was the Gorgon Medusa. So Dallas displays a truly ancient, Texas-sized symbol above our fields and forests.