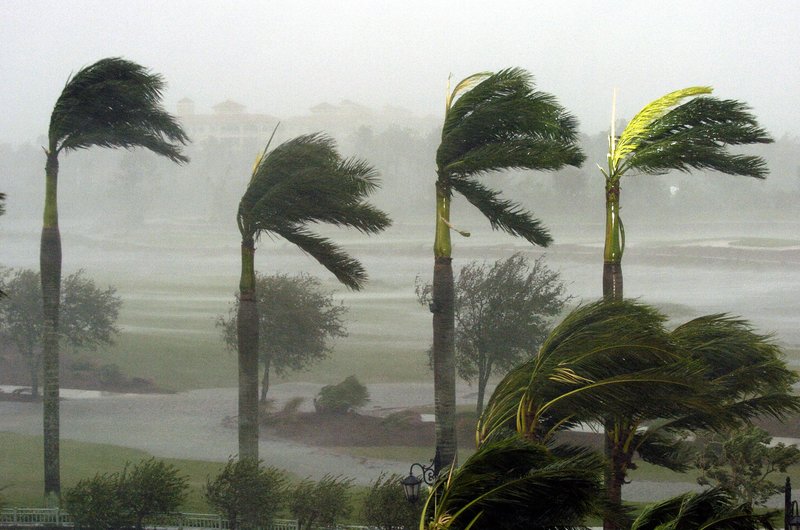 Have you ever noticed in news broadcasts of hurricanes that palm trees never seem to break, uproot and smash buildings? They don’t bend much at all but as wind velocity increases they are able to flex up to an amazing 40 or 50 degrees or more without snapping. Their fronds whip around like green flags but seldom break. On the other hand, oaks, maples, elms and other broad-leafed trees lose branches, snap off and uproot in wholesale numbers, blocking roads and causing great damage to homes and other buildings.

Why do palms manage to survive in high winds? And what are the majority of trees on tropical wind and hurricane swept areas? Yep, they’re palms and that’s no accident. They are well adapted to weathering the worst of winds. Evolution has been at work.

Palms are ancient plants called monocots that are actually related to grass and rice. Strange isn’t it? They first appeared on Earth about 100 million years ago during the Cretaceous period, when dinosaurs still roamed the Earth. If palms had memories and could tell stories from their ancient past, what fascinating tales they could recite! In any case, they are certainly long-stemmed survivors.

The secret of palm tree wind resistance is their internal structure. Oaks, elms, etc., have a single growth layer of cells in a circle just under their bark that is responsible for bringing nutrients up from the roots and other chemicals down from the leaves. The interior of these trees is virtually dead wood. Each year, these trees put on a new growth ring, enlarging their diameter slightly. These rings are clearly visible in cross sections of tree trunks.

Palms have growth and nutrient carrying tissue too, but not in a single cylinder around the edge of their trunks. Instead, their vascular, nutrient carrying bundles are arranged vertically throughout the entire thickness of the tree. In a sense, they are like wires in an electrical cable containing a myriad of individual strands arranged throughout the palm trunk. These scattered, reinforcing cable-like bundles give palms their strength.

While the individual vertical strands give palms strength, they also prevent the palm from growing in diameter after they mature. Oaks and other deciduous trees continue to gain in girth each year of their lives.

But thickness doesn’t impart a lot of strength. In fact, most are our non-palms are quite brittle as attested to by the tree litter after the recent Hurricane Michael that devastated most of the Florida Panhandle.

Palms have another characteristic that helps them get through hurricanes unscathed. Their fronds stream out with the wind and fold up to reduce air resistance. Our deciduous trees have broad leaves designed to soak up the sun but they are a weak point in high winds. The tree branches, loaded with rain soaked leaves put a tremendous wind strain on the trunk. And of course, the branches themselves are a liability, twisting the trunk to its breaking point and snapping off in high winds.

In addition to all its internal engineering, palms have widespread relatively short roots. Spreading throughout the soil these relatively thin roots form a powerful base or root ball that resists uprooting. In contrast, our deciduous trees and pines have thicker, less diffuse roots that often break in high winds.

In a nutshell, palms bend but don’t break. Not only is this a great engineering concept but philosophically it’s a good idea for us as we strive to cope with life’s emotional stresses that we encounter here in our fields and forests.