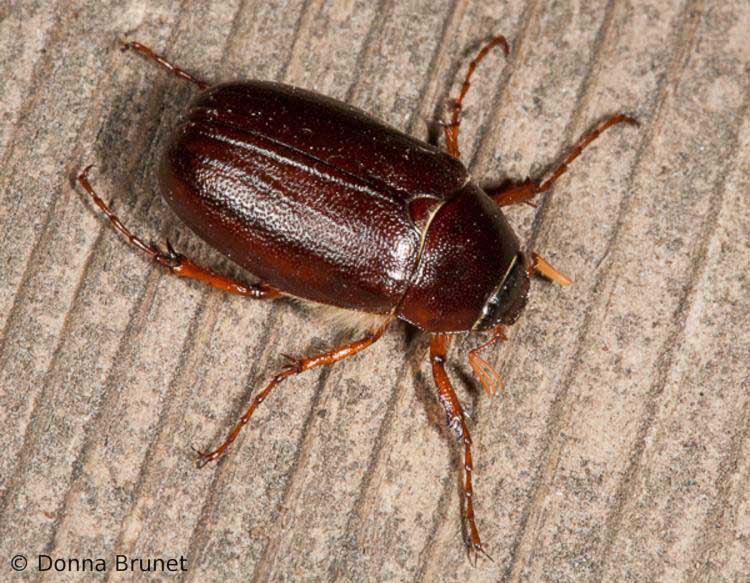 First, it was only an occasional “thung!” on a screen or a thud against a window pane. Blundering moths, I thought. But the tempo picked up as the evening wore on until by midnight there was almost a continuous barrage of muffled, hail-like impacts. I saw Hobbes, our cat, dancing along the back window sill, leaping into the air snatching at dark, lumpy looking critters and realized that the June bugs were back again. Maybe their calendars are messed up, or they can’t read. They began appearing around our house in April.

Like Alfred Hitchcock’s birds, they were first subtle and tentative, then aggressive and demanding. Thump! Bump! Smack! They became more insistent. A quick trip outside showed that every lighted window was decorated with clinging beetles and more arriving every moment. Our porch light was on and a cloud of beetles was swarming around it. As I ran the beetle gauntlet, they dived and buzzed and clung until there must have been a dozen crawling on me. Hobbes seemed only mildly curious about them. Unlike some cats we’ve had, he made no effort to eat any. Thanks a lot, Hobbes. If you won’t eat gophers, at least snack on a few crunchy insect hors-d'oeuvres. Come on! You’ll like ‘em. Help us control something to earn your keep instead of just eating birds!

During the spring, mature June beetles mate and lay 30-40 eggs, two to five inches down in soil tunnels. The eggs hatch in three or four weeks and ultimately develop into white larvae that eat the roots of lawns, weeds, vegetable, and ornamental plants.

Creamy white, about 1” to 1 ¾” long, with three pairs of legs toward the front of their bodies, these “white grubs” can do serious damage to turf grasses, causing large brown spots in lawns. In spring or early summer, they change to dark brown or black adult beetles, about an inch long and as thick as your little finger. Then, almost as though someone rang an alarm clock, they climb out of the soil and start bombarding lighted areas during the night over a period of several weeks. Actually, it’s generally the sex-crazed males that do all the flying and blundering around. The females tend to remain demurely on the ground. The blundering adults are about an inch long and dark brown.

Control methods include introducing nematodes, tiny worms that attack the white grubs but are no threat to people or plants, or various chemical pesticides available in your local garden shop.

Use caution though. Some insecticides are toxic to birds and other wildlife. All chemicals should only be applied as directed, and never near streams or ponds.

Gophers and armadillos love the tasty grubs. A lawn infested with grubs is particularly attractive to them. Ours apparently harbors plenty, so we call our place “Gopher Hill,” or the “Grand Old Benevolent Home For Itinerant Rodents.” Other rodents and birds also eat the grubs, and the squirmy little critters make great fish bait. And believe it or not, people can eat them too. As an instructor in wilderness survival courses, I’ve eaten plenty of them. They are high in fat content and when fried taste and look very much like the crispy pork rinds you can get in the potato chip section of your market. If you’re brave, collect a few, slap ‘em on the griddle, and cook until nicely browned and crisp. No? Well, it was only a suggestion. I don’t recommend eating them raw, even though wild animals do.

So, in spite of everything, remember that these beetles are just another part of the complex web of life that makes up our natural world. They provide food for a variety of wild animals. If you don’t want to eat them, at least dig up a few grubs and go fishing. Your attitude will improve and you may thank them for a fish dinner and a little relaxation.