If I had to rate birds on intelligence, I’m afraid the Killdeer would have to score very low. I mean, if you were a plump, tasty little bird the size of a small quail, and knew that you or your mate had to sit on the nest for 24-28 days before your eggs hatched, where would you build your nest? In plain view on the ground, or way up in a tree, nicely concealed on a small branch too small to support cats and other bird-munching predators? Or, if you were afraid of heights or had a strange predilection for ground nesting, wouldn’t you at least conceal your nursery in some grass? Nope! Not if you were a Killdeer. You’d build it smack dab in the open on a bed of landscape river rock, exposed to the blazing sun under a small flimsy bush whose limbs were at least two feet off the ground and within five feet of a sidewalk and a parking lot in an area where neighborhood cats prowl! Duh! And, that’s exactly what the Killdeer in the photo did near a church this past week in Nacogdoches.

On Sundays and mid-week the youth and other members of the congregation parade by right on Ma Killdeer’s doorstep. Actually, most people pass without seeing her as long as the bird is silent. She blends right in with the rocks. In general, she and her mate take all the traffic pretty well in stride unless curious onlookers come closer than five feet or so. Then the mamma or papa tries to look threatening by fluffing up its feathers, partially extending both wings and spreading its tail feathers while shrieking a shrill Kee! Kee! Kee! Kee! Any closer and the bird limps off its eggs, luring any potential predator by dragging a wing that looks broken and uttering a pitiful hurt-bird cry. After decoying the threat far enough away from the nest, it finally takes flight, returning home to resume housekeeping. 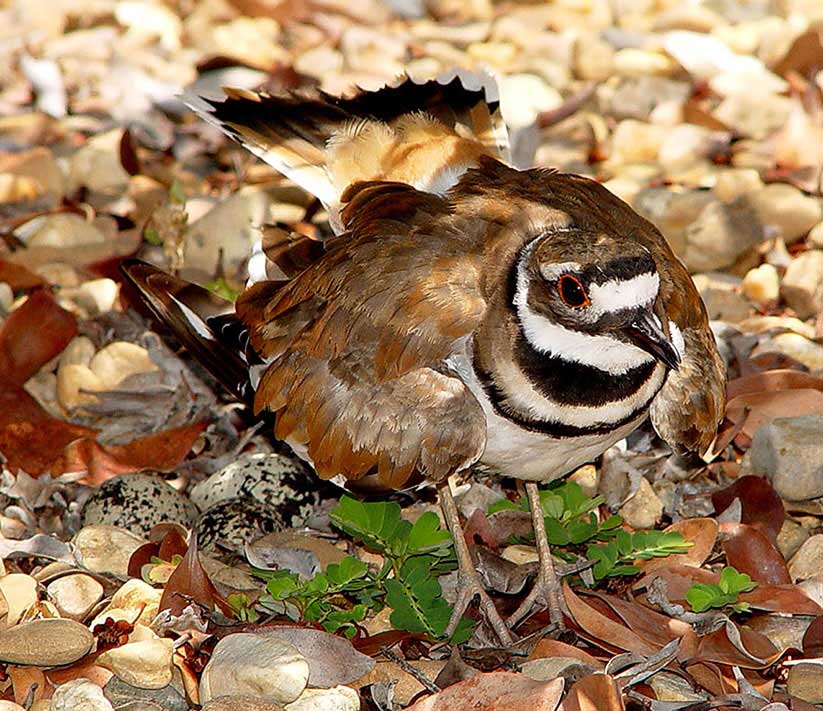 Photo by Paul H. Risk
Killdeer fluffing up to frighten intruders away from three eggs in its rock ground nest at a Nacogdoches church.

Technically, Killdeer are Plovers – shorebirds. But they are found in grassy fields, on lawns, in meadows, on prairies, in farm fields, and along the shores of ponds, lakes, and streams. They eat mostly insects – about 75% of their diet - as well as a number of other invertebrates, and a few berries. They are found throughout most of the United States, much of Canada, and into southeastern Alaska. According to Peterson’s Birds of Texas, their call is a “loud insistent kill-deeah, repeated; a plaintive dee-ee (rising)” and a repeated “dee-dee-dee.” Frankly, you’ve got to be a birdwatcher to think you can really use the alphabet to describe a bird’s call! But, that’s close.

Killdeers nest, if you can call it that, on the ground or even on flat roofs, but most often in gravely or rocky places where both the bird and their three or four dark, speckled eggs blend so well they seem to disappear into the background. No twigs, no feather or grass lining, just rocks! It’s hard to keep them in view. They seem to float in and out of visibility and you have to shift your gaze to bring them back into focus.

So, there they sit, in the full blazing sun of summer. In Texas this time of year, the concern isn’t keeping the eggs warm enough. A large part of Mama and Papa Killdeer’s problem is to keep them cool enough that they don’t cook, something they do by belly-soaking. They wander over to a stream, pool, or other wet location, squat down and soak their belly feathers so that when they go back home, their damp tummy keeps the eggs cool.

When a Killdeer’s eggs finally hatch, the young hit the ground running. Killdeer are born well-developed, fuzzy, able to run, and ready to go food gathering right out of the egg, a condition called precocial. (Think precocious youngsters.) Chickens and ducks do the same thing. Even after hatching, almost another month will pass before the young Killdeers can fly. Baby birds that hang around the nest getting their faces stuffed with food by overworked parents for a couple of weeks or longer are called altricial, a word that means to “wet-nurse.” The latter include such birds as robins, blue jays, bluebirds, and many others whose hatchlings come into the world as featherless beggars.

In short, the Killdeer is a very unusual and interesting bird, generally well-adapted to living in close contact with people. If by some miracle, the local cats, dogs, and rambunctious kids will just leave these bird parents alone, perhaps some fluffy little birdlets will soon be chasing around the bushes terrorizing the local bug population.