Leeches are parasitic aquatic worms. But have you ever heard a person described as a leech? I have, and I know a few. Some of them are politicians, even at the highest national levels. Others are just unscrupulous people of no particular stripe except that they’re parasites on society. “Leeching” off a person, family, or government agency involves draining energy, finances, or other resources. The implication is that the process takes place gradually and almost unbeknownst to the victim.

In the outdoors, leeches are parasitic worms often found in ponds and streams and active during warm temperatures. With our unseasonably warm weather, I recently began to think of dormant animals that may be getting ready for spring, and leeches popped into mind. 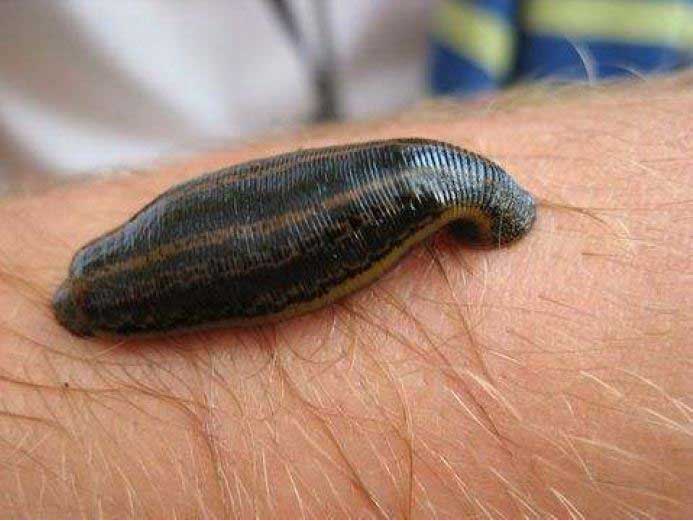 Wikipedia Commons
An arm with a medicinal leech attached. Wild leeches in Texas are generally smaller.

Brownish or black, and related to earthworms, they are equipped with a sucker at each end that allows them to attach themselves firmly to their meal donor. Living in shallow lakes, ponds, streams, and marshes they attach themselves to ankles, legs or almost any submerged skin surface and drink blood. Most of the time leeches get their nutrition from waterfowl, turtles, and fish. But, if you happen to wade or swim along they are perfectly happy to adjust their diet to human blood. They aren’t picky eaters.

Depending on the variety, leeches vary from ½ inch to 10 inches in length. They can manage fine on one full meal a month. And I mean full. Many leeches can drink enough blood that they swell to five times their normal size. Some leeches possess jaws, others have teeth at their head end. They all have a suction cup around their mouth to provide the vacuum necessary to drink their liquid meals. They also have a tail cup but only for help in holding on.

Leech saliva contains an interesting mixture of chemicals. Mucous helps make a tight seal with the host’s skin, a vasodilator expands blood vessels, an anesthetic assures that their feeding is painless, and an anticoagulant preventing the victim’s blood from clotting.

Although most of us think of leeches only as a liability, they actually have been used for thousands of years in medical treatment. Illustrations of leeching have been found in Egyptian tombs as far back as 1500 B.C. The Chinese described medical uses of leeches during the first century A.D. In Europe, leeches to be used medically were collected by volunteers who slowly walked in shallow water allowing leeches to attach themselves to their legs. Out of work? Maybe leech luring could be your game. As late as the 1800s, physicians used leeches to remove “excess” blood from patients suffering from a wide variety of maladies, including fevers and depression.

Believe it or not, leeches are still sold in some drugstores, and on the web. Since leeches suck blood, they can be used to reduce bruises and swelling. They are sometimes used to assist in the transplantation and reattachment of human tissue. Leeches can help improve blood flow to damaged body parts by helping regenerate blood circulation and prevent clotting that could result in gangrene. Research is also underway to explore how leech anticoagulants might be useful in human medical treatments.

Nowadays you are more likely to encounter leeches when hiking or camping rather than at your physician’s office or pharmacy, and your main interest is how to remove them from your body.

Remember the scene in the classic movie The African Queen when Humphrey Bogart, after a dip in the river to repair his boat, finds he’s collected a crop of leeches? With a lot of overdone dramatics, Katherine Hepburn sprinkles salt on them to shock the little beggars into letting loose. That works but isn’t necessary. Just slip your fingernail under the leech’s sucker to break the vacuum and flip it off. No big deal. Squeezing, burning with a cigarette, applying salt, alcohol, or insect repellant is likely to cause the leech to regurgitate part of its stomach contents into you before it drops off, increasing the chances of infection.

Like so many other creatures in the wild, most of us will never see a leech. This time of the year they are generally buried in mud. But when the water temperature rises they become active, quietly carrying on their sneaky lives in our fields, forests, and waters waiting for your tasty leg or another animal to come along.