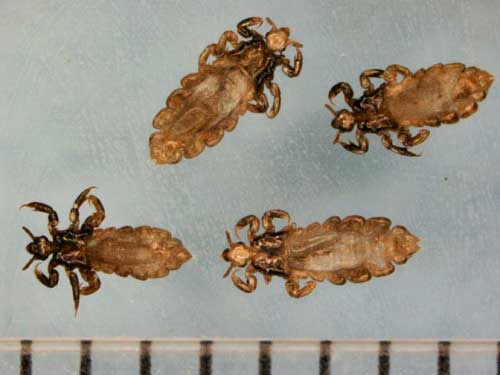 Photo courtesy of Iowa State University
Human lice are found around the world. School children are especially likely to get them.

In my last column, I said that bedbugs are one of the very few insects that make my flesh crawl. Well, here’s another one. Lice. Don’t ask me why, that’s just the way I feel. A parasite that drinks blood and can be felt crawling around your head, body, or private parts gives me the willies.

People have long felt that lice were filthy, undesirable, unwelcome, cruddy little vermin. Held in such high contempt, feelings about lice have also been used to describe miserable, base, despicable, vile people. As in “that guy is a real louse.” Work that is substandard, inferior, shoddy and shabby is often referred to as a lousy job.

Lice are named according to the part of the body they call home: Head lice, body lice, and pubic lice. All of them are only 1/12 to 1/8 inch long, and grayish to tan in color, and can neither hop nor fly. They crawl. Louse eggs are even tinier – 1/32 inch (1 mm) in size. Head and pubic lice eggs are firmly glued to the base of single hairs and are very hard to remove. Body louse eggs are usually cemented to the fibers in clothing. Louse eggs are called nits and from that name, and the difficulty of removing them, comes the term “nitpicker” for a person who obsessively pursues minute, often unimportant and mind-numbing details. Pubic lice, commonly called “crabs,” are usually acquired through sexual contact.

Lice are often associated with people who are careless about personal cleanliness and hygiene. But not always. Anybody can acquire them. School children are commonly infested because of head to head or otherwise close contact with playmates, or by sharing combs, hair brushes, and articles of clothing such as hats, scarves, and coats. They can also lurk in upholstered furniture.

Louse nits hatch into immatures called nymphs and develop into adults in 8-10 days. They feed on blood every 3-6 hours. Diseases carried by lice include typhus, relapsing fever, and trench fever.

Bites cause raised, itchy bumps and scratching may produce an infection. A rash at the nape of the neck may also be present.

So what do you do if you find that you or your children have lice? First of all, you don’t have to rake all those tiny nits out of the hair unless there are so many that they pose a cosmetic problem. For example, a heavily infested person may have visible nits in their eyebrows. The combing may help, but repeated medications will kill the new lice emerging from the nits.

Vaseline, kerosene, gasoline, vodka, and mineral oil are not only ineffective, they are dangerous. Treatment of lice infestations is usually accomplished by the application of shampoos and other preparations containing pesticides.

A 1% permethrin cream rinse called Nix is available over the counter. A stronger 5% permethrin compound called Elimite is obtainable by prescription. Permethrin preparations leave a residue that kills emerging nymphs, so reapplication is usually not needed.

Rid is a shampoo containing pyrethrums, but it sometimes causes an allergic reaction. Also, it is not effective in killing unhatched nits so a second treatment is recommended in 7-10 days.